Exercise pays off – in many ways. Since February, Christian Gösweiner has cycled 875 kilometres as part of the “Cycle to Work” campaign and won a new TU Graz bicycle. 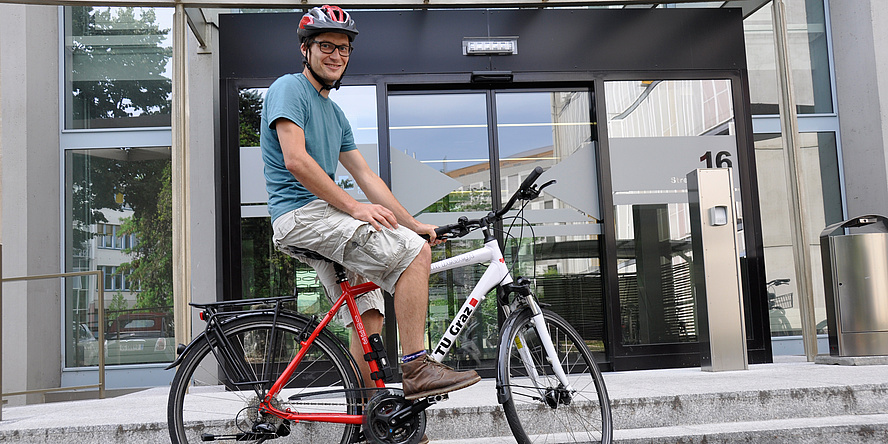 That is what a winner looks like. Christian Gösweiner with the TU Graz bicycle.

Austrians have already cycled more than 2.8 million kilometres to their place of work this year, both for the benefit of the environment and their own health, avoiding 450 tons of CO2 emissions. So far more than 23,000 registered participants have joined the “Cycle to Work” campaign, many of them from the Graz University of Technology.

Christian Gösweiner from the Institute of Medical Engineering – one of many employees of the Graz University of Technology who have decided to go to work the ecological way – is one of the campaign prize winners. He is now the proud owner of the TU Graz bicycle donated by the Buildings and Technical Support Service Department as an extra incentive on top of the health benefit. But as the lucky winner recently bought a TU Graz bicycle, the real beneficiary of the prize is his girlfriend. Together with Brigitte Schicho, ARGUS – the bicycle advocacy group, and Karin Krottmayer from the Workplace Health Promotion Unit at the Graz University of Technology, Mario Hafner, coordinator of the cycling campaign at the Graz University of Technology, handed the bicycle to the winner.

News+Stories: Congratulations on winning the bike, but how many kilometres did you actually have to cycle for this?

Christian Gösweiner:  I won the TU Graz bicycle in a draw – for the sake of fairness. Not everybody has to cover the same distance to get to the university, so some people would be advantaged and others disadvantaged if kilometres were all that counted. Because of this, the final rating also considers how many days you left the car at home and went to work by bicycle instead. However, the “Cycle to Work” campaign homepage collects precise data for the statistics.

So do you know the Austrian statistics? And your own, of course?

Christian Gösweiner:  Throughout the country, more than 23,000 participants have saved 51 million kilocalories, 1.3 million euros and 450 tons of CO2 by travelling more than 2.8 million kilometres by bicycle rather than in their car. This is in an impressive result. Personally I have travelled approximately 875 kilometres by bicycle since February, leaving the car at home.

How did you find out about the campaign?

Christian Gösweiner: A friend and colleague told me about it and invited me to join his team. Its name is “SK Lation” (laughs). With a team partner it is so much easier to motivate yourself. 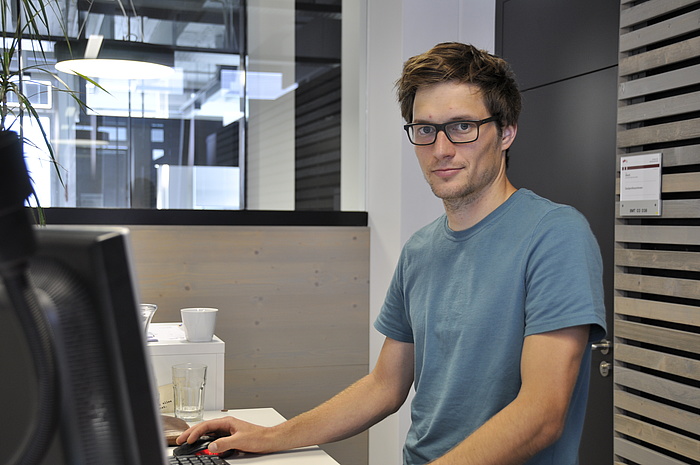 Christian Gösweiner researches new contrast agents at the Graz University of Technology. He cycles to work.

What do you think about the Mobility Concept of the Technical University of Graz?

Christian Gösweiner: I think it is a very good thing that the Graz University of Technology is taking up this issue seriously. As the University has many employees and is located in the centre of town, a mobility concept made a lot of sense. The roofed parking space for bicycles and the bicycle service additionally encourage people to change over.

Do you feel at ease as cyclist in Graz?

Christian Gösweiner: In my opinion the coexistence of cyclists and motorists is already working quite well, but there is still a lot of room for improvement. Especially on busy roads with a lot of traffic, alternative routes for cyclists are not often available. But if you are respectful as a cyclist, the motorists will respect you as well.

Don’t let others intimidate you, but don’t provoke them either. Then we will all get along fine and arrive safely at our destination.

Which bicycle routes are already working well, and where do you see potential for improvement?

Christian Gösweiner: One of my favourite routes is along the River Mur, it takes you quickly from the north of Graz to the south. For our campus I would like to see a bicycle lane network with no gaps that connects all sites and includes the University of Graz in particular. Many students who study NAWI often commute daily between the universities.

Do you cycle in your free time as well, and do you have an insider tip for us?

Christian Gösweiner: I enjoy taking the bicycle lane along the River Mur, going north, and then on to the Gösting terminus. There you can lock up your bicycle in the shelter and walk up to the castle. I always enjoy the view of the town from up there.

Will you use your bicycle in winter as well?

Christian Gösweiner: There are only a few days when the weather conditions are unsuitable for going by bicycle, for example when there is black ice on the road, other than that I do not see any problem cycling in winter, especially as the wintery conditions are not too severe in Graz.

What is your advice to cyclists in Graz?

Christian Gösweiner: You should confidently claim your space on the road and be visible for the motorists. I always say: “Don’t let others intimidate you, but don’t provoke them either. Then we will all get along fine and arrive safely at our destination”.

Christian Gösweiner is a member of the “CONQUER” staff, an EU project to develop new contrast agents at the Institute of Medical Engineering. Before that he worked as a physicist in experimental physics, but although this was interesting he discovered that his real passion was to research real life applications. His work aims at making analyses for the medical professions easier in the future. This should also reduce the waiting times for patients and speed up diagnoses. One idea behind this research is to explore the possibility of switching the contrast agent effect on and off during the scan. In the future this could eliminate the need for multiple scans.