Biomedical Engineering student Anthulla Dushi shares her experience in immersing in Brain-Computer Interfaces as a member of the “Graz BCI Racing Team – Mirage 91” of TU Graz. 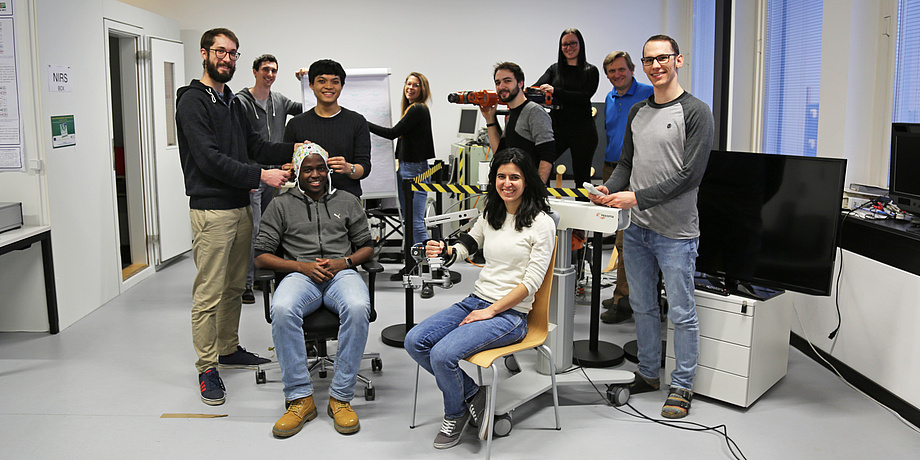 In this room at the Institute of Neural Engineering of Graz University of Technology (TU Graz) the team meets on Mondays. If you want to join the team you are welcome!

How did I enter the team?

My interest in Neurotechnology as well as the International Welcome Days, organized by the University, made me aware of the Graz BCI Racing Team – Mirage 91. The team has considerable experience in developing state of the art Brain-Computer Interfaces (BCIs) and in participating in BCI Racing competitions. As an interested master student in the Biomedical Engineering Master’s programme, it took me only one email and I was present at the first meeting of the team for the winter semester 2017. The welcoming environment and the interesting and also funny discussions for the upcoming challenges, reassured me of my choice to get involved in order to contribute to the teams' goals. The next major goal is to participate in the CYBATHLON BCI Series in 2019. 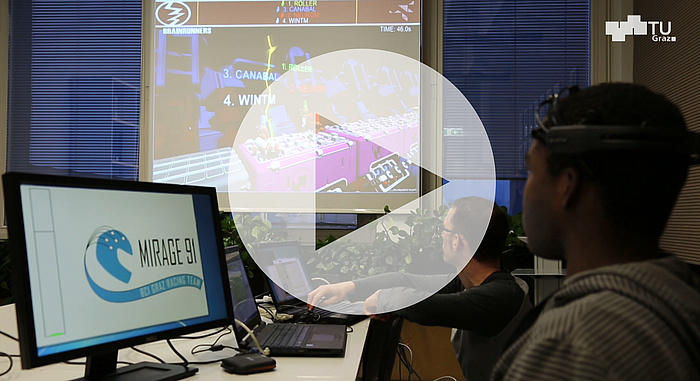 A visit at the Graz BCI Racing Team – Mirage 91.

What is the CYBATHLON BCI Series 2019?

The CYBATHLON BCI Series 2019 event is a BCI Racing competition organized by the Institute of Neural Engineering, Graz University of Technology. In fact, it’s the first of its kind. In conjunction with the simultaneously happening 8th Graz BCI Conference, it is the upcoming get-together of worldwide BCI technology developers and researchers. We, as a registered team, have the opportunity to present our advancements and methods within the competition and also in a dedicated poster session.

Next years’ CYBATHLON BCI Series event is all about Brain-Computer Interfaces, whereas the CYBATHLON 2020, organized under the umbrella of ETH Zurich, is a broader competition inspired by the Olympic idea. The CYBATHLON’s idea is to enable severely handicapped people, assisted by recent research developments on assistive systems, to compete with each other in solving everyday tasks. The event distinguishes six different disciplines, which are: Brain-Computer Interface, Functional Electrical Stimulation Bike, Powered Arm Prosthesis, Powered Leg Prosthesis, Powered Exoskeleton and Powered Wheelchair. The next event, for which we have already registered, will take place on May 2 - 3 2020 in Kloten, Zurich.

The welcoming environment and the interesting and also funny discussions for the upcoming challenges, reassured me of my choice to get involved in the „Graz BCI Racing Team – Mirage 91“.

The easiest and most prominent way is to stop by at one of our weekly meetings on Mondays at 5pm at the Institute of Neural Engineering or via email to bcinoSpam@tugraz.at. There is no limitation in study field or experience, since it is more than welcome that diverse people join and share their skills within the team. There is always something to learn by doing! I look forward to meeting you.

If you would like to meet TU Graz´s student teams face to face you will be able to do so on June 16th: The students are presenting their work at "TU Graz StreeTech" at Hauptplatz Graz. Come, join and get informt! For more information visit the events Website "TU Graz StreeTech".

The Graz BCI Racing Team – Mirage 91 makes controlling things with your mind a reality. But before mind control systems become widely available, there are a lot of practical problems to be solved. That’s why the team takes part in CYBATHLON events: to train and to enhance practical application of assistive technologies in competitions.