Start-up Felloz: have smartphone, will be able to donate

From the idea, to the team, to real social innovation. The founding team of the start-up company Felloz found out how to create real social impact using technology and entrepreneurial spirit. 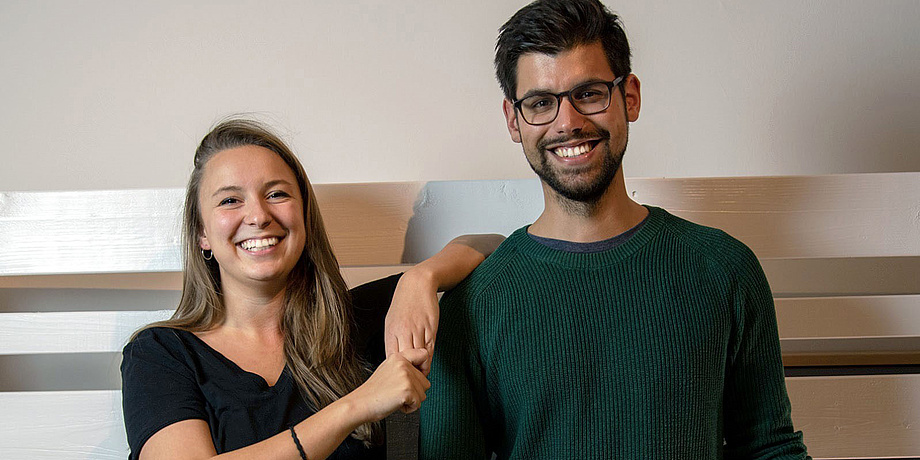 Raphael. He studies biomedical engineering at Graz University of Technology (TU Graz), enjoys student life and needs a job in the summer to make a living. By chance he comes across a company where he can do good and earn money at the same time. He spends the summer in Germany, where he collects donations for charitable organizations such as "Samariterbund", going door to door with many other persons and telling people about the projects. Community with the team is the most motivating factor, after all, the majority of people who open the door cancel and don't make a donation – and this is not due to a lack of sales skills, but to the nature of the work. But as so often in stressful phases before exams, giving up is not an option here.
Raphael, that's me. And one thing I couldn't get out of my head during that busy summer was that a fairly large part of the donations have to be spent on fund-raising itself. But well, my living costs as a student were taken care of – and that was the main goal after all.

Back in Graz, Austria, and a few semesters and experiences later, the question persistently came up again and again. Wouldn't it be possible to ensure that more donations reach charitable organisations and their projects and less funding is lost on the way? The approach behind this is typical of technology students – that there must be a solution for every problem. It's not for nothing that we hear over and over again at the University "Every problem is a challenge that can be solved". Discussions among friends at TU Graz and acquaintances brought me to the still vague idea that the process could be made more efficient through digitalisation. But how exactly? And all alone?
After all, during the fund-raising in Germany the team itself was the greatest support and motivation. It quickly became clear that an interdisciplinary team was needed that combines its technical know-how with economic expertise.

By chance I told Carla – who was already working in a start-up and was full of energy – about the idea. Playfully we developed the idea further until finally it became a joint project. For the first time something tangible gradually took form and we could imagine creating something big – Felloz, the first “real" social network, where anyone with a smartphone could make a donation. And we guarantee that every donation is received in full, cross-funded by companies which in turn donate through Felloz. A short time later, we find ourselves in the Start-up Garage, which gives us input and support so we can continue and find out what’s important.

The Start-up Garage is a start-up accelerator at TU Graz and the University of Graz. All those who are accepted into a start-up semester develop their business ideas further, accompanied by mentors, and get support during implementation. 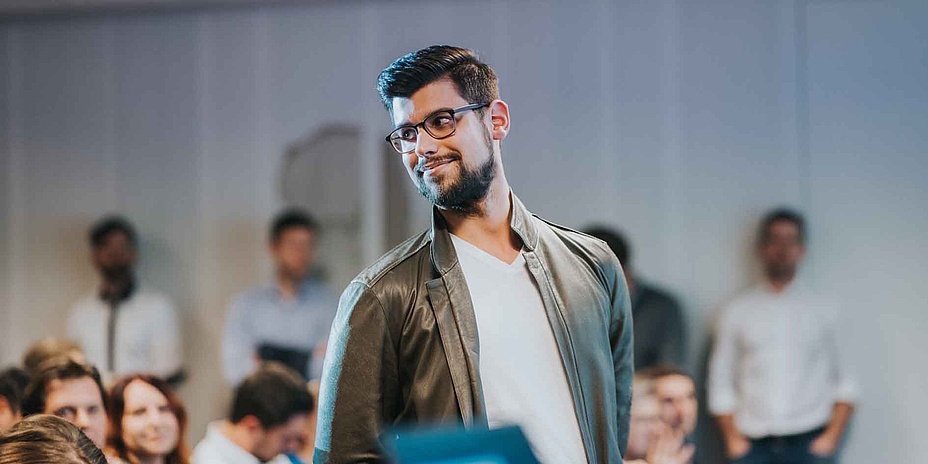 At the final pitches of the Start-up Garage, Raphael Marton presents the idea of redefining fund-raising online. The Graz start-up accelerator is a stop on the "zigzag" path to the goal.

Now there was an idea, a team and the Start-up Garage. But there wasn’t a prototype. We always talked about developing the “pretotype”, short for pretend to be a prototype, as the simplest and cheapest version of Felloz before the prototype, and yet after half a year we hardly had anything tangible to show for it. But on our "zigzag" journey to our goal we got to know Sabine – a friend of the family and entrepreneur with heart and soul, who made it her business to coach us.
At the weekly video call we had to deliver something and show what we had achieved in the last week – and lo and behold, a month later the pretotype was ready for testing. Something we hadn’t managed in the previous six months. We had got lost in details, didn't want to bring out the perfect product, but (unconsciously) the perfect prototype.

Slowly friends and family got to know what was going on. We tested our idea with them first, some celebrated it, others didn’t want us to continue working on it. Total waste of time and money, far too many target groups we would have to include, it would never work, why would anyone join in? Well, we soon realized that we couldn’t manage the workload of a three-sided platform on our own, even in the test phase. So we got Raphael involved in the team – yes, Raphael number two – a programmer. He was fully convinced about the idea and in the form of Felloz he had finally found a project where he could live up to his full potential – a win-win situation. And, as many before us had already proven in other areas, our pretotype test proved that everything is possible.

Meanwhile we have NGOs who want to use our platform, interested users who want to donate via the platform, and companies we are talking to. Now it's time to move on to product development and everything else that has to do with founding.

Start me up - what we learned in the last year

Raphael Marton was born in Lower Austria and has been studying Biomedical Engineering at TU Graz since 2018. In 2020 he founded Felloz, Austria's first digital donation platform. Felloz supports NGOs to fund projects more effectively than ever before. Raphael's hobbyhorses: visions, creativity, creation.