Beate Steller, doctoral student in chemistry at TU Graz, met the absolute greats of her specialty at the 67th Lindau Nobel Laureate Meeting. 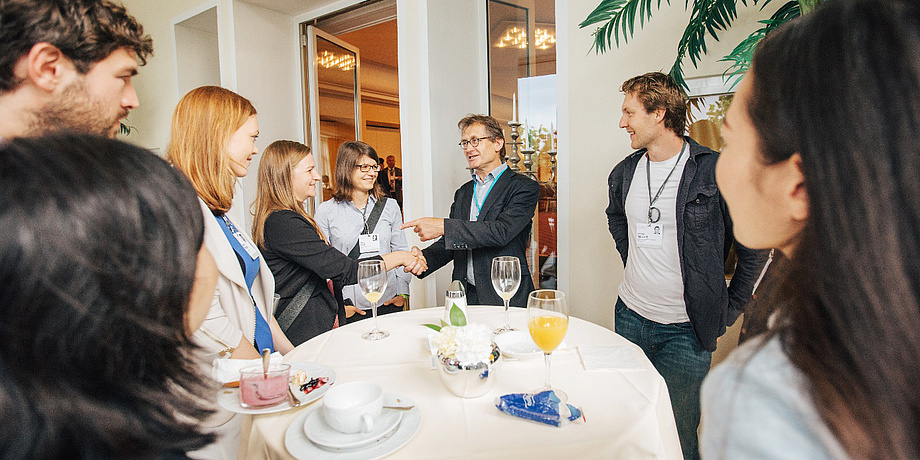 At the Science Breakfast of the Federal Ministry of Science, Research and Economy TU Graz young scientists Anna Eibel and Beate Steller meet Bernard Feringa who, together with Jean-Pierre Sauvage and Fraser Stoddart, was awarded the 2016 Nobel Prize for Chemistry.

Every year since 1951, the Nobel Laureate Meeting in Lindau on Lake Constance has taken place with the aim of bringing together young, promising researchers with Nobel prizewinners of the same specialty. Dialogue and the exchange of knowledge between the generations of scientists is promoted in talks by well-known scientists, discussion rounds and a variety of social events. This year’s 67th Meeting was dedicated to chemistry. In addition to roughly 420 students, doctoral candidates and budding researchers from more than 70 countries, I and my colleague Anna Eibel were delighted to get an invitation to Lindau.

The two-stage application for this event began in September of the previous year. In the applications, weight was given to previous publications and conference contributions, recommendations from professors, teaching experience and extra-curricular activities. On top of this, a special commitment to one’s own area is expected. After that, we were nominated for the Meeting by the Austrian Academy of Sciences, and finally reviewed and selected by the committee in Lindau. My motivation for applying for the Meeting was above all else the opportunity to get to know people behind all these ingenious discoveries. I wanted to find out what motivated all our scientific role models, what drives them forward, and what they want to pass on to us young researchers.

My motivation for applying for the Meeting was above all else the opportunity to get to know people behind all these ingenious discoveries.

At the conference itself I had the feeling that it was exactly this exchange that was important for the Nobel prizewinners. These world famous scientists often used their lectures not only to present their outstanding discoveries or current research, but also to encourage us to stay with our research even when we meet resistance. After all, a few of these highly respected scientists – for instance, the Nobel laureates Stefan Hell and Daniel Shechtman – had had exactly this experience. Also, the Nobel prizewinners were in constant conversation with the young scientists between talks in order to be able to pass on their experience and discuss ideas. At the Science Breakfast organised by the Federal Ministry of Science, Research and Economy I was able to talk with Ben Feringa, the 2016 Chemistry Nobel prizewinner, about daily life at university.

These world famous scientists often used their lectures to encourage us to stay with our research even when we meet resistance.

Our responsibility as young scientists was at centre stage of this event.

Especially in this post-fact era, in which Facebook and Twitter are regarded as main sources of information, it is our task to provide clarity.

In his opening speech, Steven Chu pointed out the dangers of climate change and that its longterm effects lie in our hands. Especially in this post-fact era, in which Facebook and Twitter are regarded as main sources of information, it is our task to provide clarity. This message could be strongly felt during the whole conference.

Scientific matters apart, establishing contacts was also on the agenda. At various get-togethers and evening dinners we had the opportunity to get to know other young scientists in a relaxed and informal atmosphere and to exchange information and stories. And it always astounded me how easily the various persons from completely different cultures and societies could make themselves understood through the one thing they have in common: science – in this case chemistry.
On one of these evenings the opportunity came up during a long talk by Helga Nowotny – the president of the European Research Council Forum Austria – to get tips for the next scholarship application. When they sat down at our table at the Bavarian evening, we were able to get to know Ei-ichi Negishi, the 2010 Chemistry Nobel prizewinner, and his family more privately.
It was a unique honour to be present at the Nobel Laureate Meeting in Lindau. Not only was I touched by the inspiring and charismatic demeanour of the Nobel prizewinners, the meeting was also an opportunity to establish irreplaceable international contacts.

The meeting was also an opportunity to establish irreplaceable international contacts.

Every year at the “Lindau Nobel Laureate Meeting”, Nobel prizewinners meet face-to-face with several hundred budding researchers from all over the world, including master’s and doctoral students as well as post-docs. The focus alternates between chemistry, physics and medicine/physiology. In Austria applications are made through the Austrian Academy of Sciences (ÖAW).

For more details about applications to the Lindau Nobel Laureate Meeting in Austria, see the Austrian Academy of Sciences website under scholarships/prizes – young scientists development.