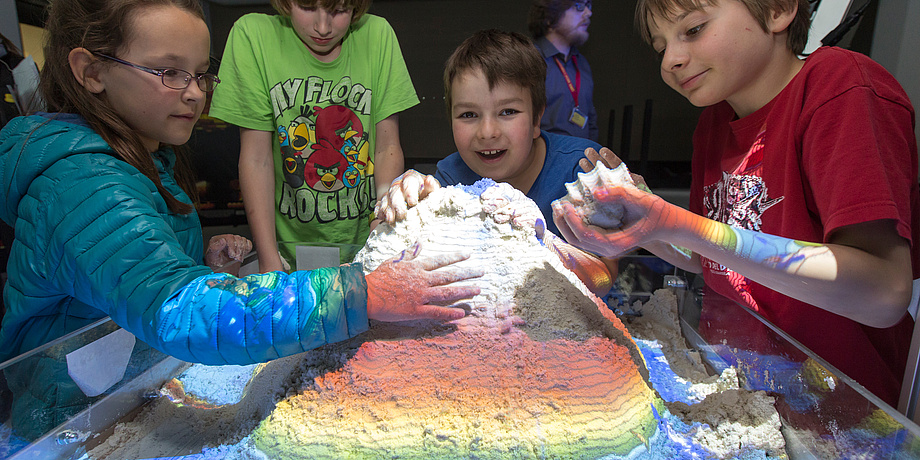 At the "Lange Nacht der Forschung 2016" event the youngest of our visitors were fascinated by our Sandbox and its possibilities.

An observation often tested, especially in summer times! Fortunately, scientific work does not stop at such (primitive) observations: it seeks an explanation for the effect.

For the situation of wet sand, it took a while to find the latter: the first scientifically-sound explanation for the minimal amount of water needed to build a sandcastle was published 1998 by Thomas C. Halsey and Alex J. Levin  from the “Exxon Research and Engineering” branch of Exxon (now Exxon Mobil Corporation, one of the largest oil and gas companies in the world). This is more than 170 years later than the seminal work of Claude-Louis Navier, who postulated the first version of an equation describing the motion of fluids (i.e., liquids and gases). Thus, sand (i.e., an ensemble of particles) mixed with water shows a much more complex behavior than just sand and just water. How come?

In the “Virtual Sandbox” project we collaborate with the University College of Teacher Education (Pädagogische Hochschule Steiermark) to explain the field of particle engineering (in which “sticky sand” plays a central role) to primary and secondary pupils, as well as students at the TU Graz. One goal is, that pupils can perform experiments on their own, realizing the peculiar behavior of particles at rest and/or in flow.

The central product of the Virtual Sandbox project is, needless to say, a virtual sandbox: with a Kinect camera, a projector, a simulation computer and smart software available in the web, we can measure the 3D surface profile of the sand. With this information, one can compute height contours, or perform some simple simulations, e.g., the flow of water on the sand surface. All this can be projected back onto the sand surface, allowing users of the sandbox to interact with the calculations.

Predicting what happens in an industrial manufacturing process is fundamental for the efficiency of such a process (i.e., what we gain compared to what we put in). As we are “particle people”, particle processes like (i) granulation (i.e., the size increase of particle), or (ii) particle drying (making wet particles dry again) are of main interest for us. Both processes are of central importance for the food and pharma industry: roughly ten percent of products in the pharma industry are “produced out of specification”, i.e., the product cannot be sold, and is therefore waste. Often, the inability to predict what goes on in the process is the reason for a sub-optimal operation of processes. In the energy and petrochemical industry wet granular matter is also important, e.g., for so-called fluid cokers that are used to generate fuel from heavy crude oil. Last but not least, “sticky sand” is only one example of so-called “cohesive powders”: inter-particle forces in these powders lead to unpredictable flow behavior, often causing industrial production processes to fail. A daily “weather forecast” for these processes would help – and our projects are hopefully one step forward to achieve this vision.

If you wand to see the Sandbox in action, just follow this link!

Publications to our research Project “Wet Powder - Comprehensive Investigation of Wet Powder Blending” can be found online. Results of our dissemination project “The Virtual Sandbox” as well.

The virtual sandbox, including our particle simulation software, is permanently installed at Inffeldgasse 25/b, and is open for interested students and school pupils for testing and research activities.