Witnesses to history under geochemical scrutiny 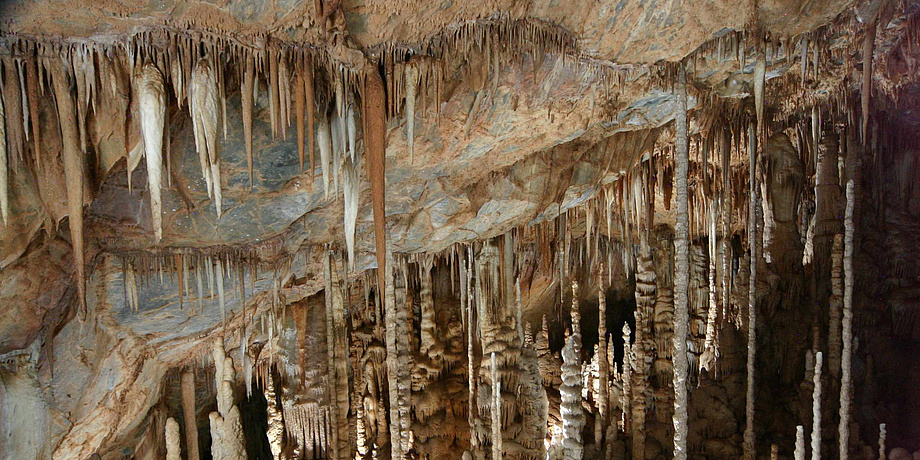 The world of dripstones at Katerloch (Styria) is an important climate record.

How will the climate change in the future? Questions about the future global climate can be better answered when we know more regional details about climate in the past. After all, climate developments can only be understood and assessed in a larger regional and time context.

Ronny Boch and Martin Dietzel at Graz University of Technology’s Institute of Applied Geosciences have some special witnesses in their sights. "Stalagmites are a record of high-resolution precipitation and temperature over thousands of years and thus constitute an exciting climate record," according to Ronny Boch. Dripstones are mineral deposits and originate when rainwater is enriched with carbon dioxide on its way through the soil, dissolving limestone. In cave interiors CO2 is freed from dripping water, thus yielding lime precipitates. Compared with other climate records, such as ice cores and ocean sediments, dripstones have the advantage that the time and speed of climate change can be determined very precisely using tiny, natural amounts of radioactive atoms of the elements uranium and thorium in the dripstone lime. 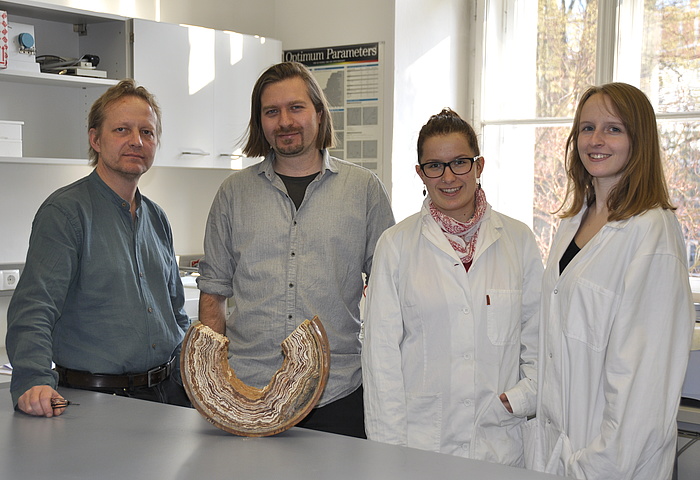 In their master’s and bachelor's programme "Earth Sciences with specialisation subjects in hydrogeology and hydrogeochemistry", students Marlene Sakoparnig and Anna Gollowitsch are currently investigating how present climate information is depicted in actively growing dripstones. They collect water drops from various dripstones in the cave in glass bowls the size of watch glasses. The layers of crystals formed over time are then analysed using the latest geochemical methods at TU Graz and at the cooperation partners’ University of Innsbruck and Earth Observatory Laboratory in Singapore. The students additionally identify the chemistry of the water and drip rates and compare the results with meteorological data to draw further conclusions about the changeable growth of the dripstones.

Articles on this topic with the participation of Ronny Boch at Graz University of Technology have been published in Science and Nature Communications.

Another of the Institute’s research focuses deals with limestone deposits in a big way: so-called "geothermal scaling" – the formation of undesired mineral precipitates in geothermal plants. Scale forms in pipes, among other things, which transport thermal water from the Earth’s interior.

Geothermal energy is a hot topic in the truest sense of the word. Among the renewable energies, it is the only one that is practically inexhaustible and always available. In other words it can provide base-load power and is not dependent on external factors, like wind or solar energy. The thermal fluid composed of water and gases which is pumped up from depths of up to five kilometres can be used for heating and at sufficiently high temperatures in excess of some 100 degrees Celsius for electricity generation. The problem is that thermal water usually contains a high content of dissolved minerals whose dissolving power is dependent on pressure and temperature. When the pressure and/ or temperature in the pipes changes during extraction, these minerals can crystallise out in the pipes and other parts of the plant, such as heat exchangers, and with time deposit an increasingly thick layer. The worst case scenario is a breakdown of the geothermal plant. 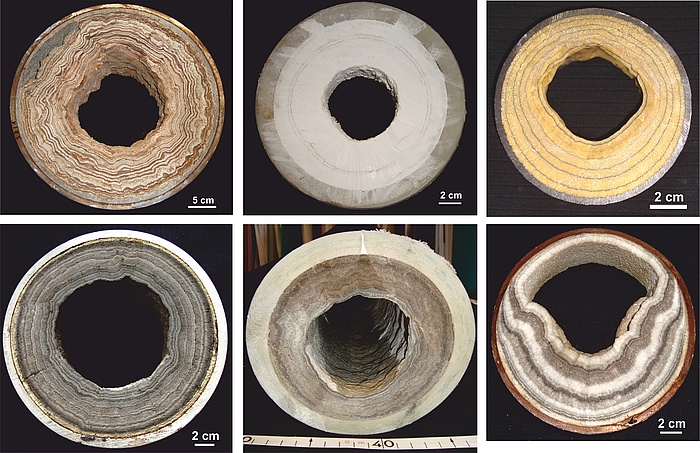 Problematic geothermal scale: chemically all made of calcium carbonate but still very individual – in steel and plastic pipes from a variety of plants in Hungary.

Researchers at the Institute of Applied Geosciences are investigating these special deposits at selected locations in Austria, Germany and Hungary in the framework of a project funded by the Austrian Research Promotion Agency. They want to find out more about the growth dynamics of such geothermal scaling in order to reduce the cost-intensive maintenance intervals and extend the service life of the plants. For this reason detailed "forensic studies" are carried out on the retrieved samples. In other words, how a particular scale was deposited and specifically shaped and what natural and technical factors were crucial for it is being chemically reconstructed. Moreover, substrates from diverse materials, such as various steels and plastics, are exposed to thermal waters at different temperatures and mineral content in laboratory experiments. Possible inhibitors – substances which reduce or prevent precipitates – are also being investigated. Furthermore, the interactions between the water constituents and scale are being simulated using hydrogeochemical computer models. "So, depending on the different conditions at the various locations, we’ll be able to develop individual strategies to deal with scaling," adds Ronny Boch. The naturally occurring and harmless polyaspartic acid has shown itself to be an inhibitor of sintering in tunnel drainages in certain concentrations, and various phosphate compounds also have an inhibitory effect on scaling.

The project "NoScale – characterization of deep groundwater to prevent precipitation processes (scaling) and corrosion of geothermal plants" is being financially supported by the Austrian Research Promotion Agency (FFG) as a cooperation between TU Graz, the Austrian Institute of Technology (AIT) and JOANNEUM RESEARCH Forschungsgesellschaft. Update: A current article on this topic was published in Geothermal Energy in May 2017. 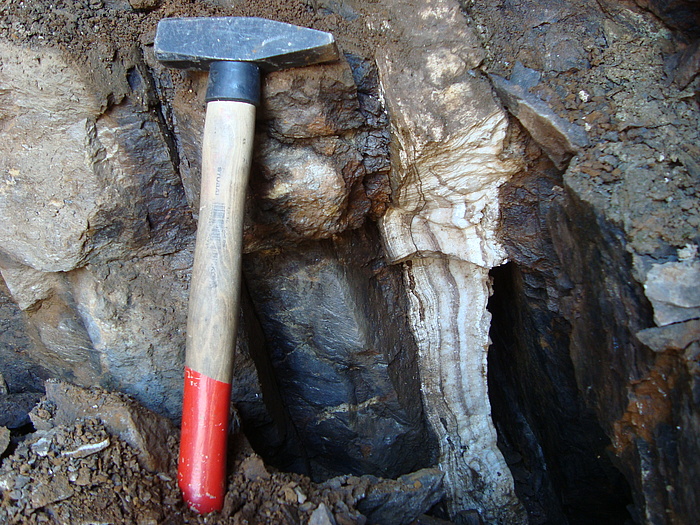 Erzbergite: finely laminated fillings in joints and faults on the Erzberg, Styria.

In a recently launched project with the participation of the head of the new NAWI Graz Geozentrum, Walter Kurz, and the Erzberg company geologist, Hannes Pluch, the TU Graz team travels regularly to the Erzberg in Styria to examine the formation of the so-called erzbergite. Erzbergite consists of alternating thin bands of the carbonate minerals aragonite and calcite, and sometimes occurs with the locally known "iron flower" stone – both varieties are very popular with mineral collectors. These crystallised, calcareous deposits from running water grow in vertical fractures which presumably originated partially through the tectonic movements and earthquakes during the past (and in some places continuing) formation of the Alps. Erzbergite is a kind of "filling material", as it were, which makes use of the available faults and clefts. For the first time ever, the age of erzbergite has been pinpointed using the time-consuming uranium-thorium method by cooperation partners Lin Ke and Xianfeng Wang in Singapore. In several cases it has turned out surprisingly that completely "healed" fractures, some measuring 10 to 25 cm, only became filled in the last few thousand years – in other words, geologically very recently – and in parts detritus (cataclastic rock) which originated through sudden movements became hard. "Findings up to now suggest that some of the openings themselves are possibly not much older. In other words, they originated through neotectonic movements and lateral shifts in the massive Erzberg," says Ronny Boch. "Larger alpine fault zones and their resulting smaller earthquakes are known in the region, something which supports the possibility of more recent movements of the Erzberg. We want to look at these more closely."

These research topics are attributed to the Field of Expertise "Advanced Materials Science", one of TU Graz' five strategic areas of research.