Why Large Engines Research Steps on the Gas

In order to meet ambitious environmental goals, research around the world must rise to the challenge of developing innovative and sustainable solutions in the areas of mobility, transportation and power generation. 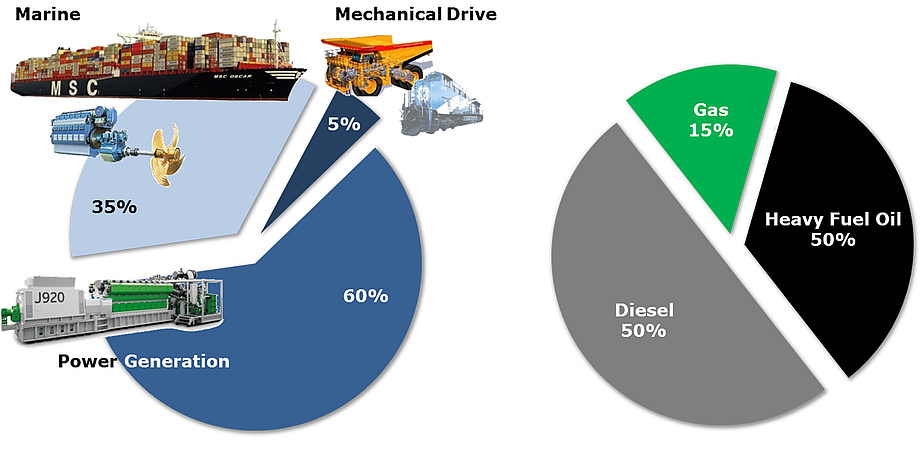 Breakdown of fuels for large engines.
The question often arises in connection with electric mobility whether there will be any need to conduct research on internal combustion engines in the future.
As practical as electric powertrains are for urban mobility, they do not provide a “one size fits all” solution. Internal combustion engines will still play a significant role in the coming decades, especially in response to demands for long driving ranges and heavy cargo loads.
Research on passenger vehicles will focus above all on the best possible combination of the internal combustion engine and the electric motor (hybrid concepts). In addition to this electrification of the powertrain, the use of “e-fuels” (fuels produced using excess electricity from renewable energies) and the achievement of nearly zero emissions are key research topics.

In contrast to the area of mobility, the picture is much clearer in regard to the future use of conventional internal combustion engines in large engine applications. As Figure 1 makes clear based on engine power output (engines > 1 MW) sold in 2015, large engines are used to a very great extent for power generation. In many cases, this occurs in CHP (combined heat and power) facilities where electricity and heating are produced at the same time. The marine sector is another major area of application for large engines. In the combination engine-generator, internal combustion engines provide the electrical energy for ship propulsion or work directly on the propeller – as in the case of large container ships. In addition, large engines can be found in many other applications, for example locomotive propulsion or mining trucks. 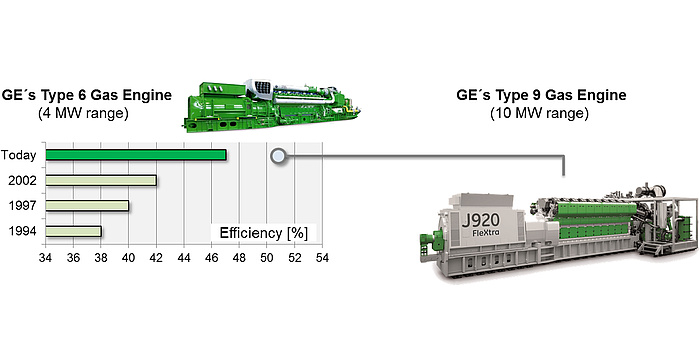 Development in efficiency of General Electric’s engines.
There is no way around using internal combustion engines to generate power. Because of their quick reaction times, it can be assumed that their share may even increase in connection with the provision of peak electricity to compensate for fluctuations caused by production from sustainable sources (solar and wind). In the foreseeable future, internal combustion engines will not be able to be replaced in maritime shipping, which is responsible for around 90% of all transportation of goods worldwide. Electrical powertrains are not possible in this area for technical reasons – for example weight or range. The internal combustion engine will also remain indispensable for mechanical drives wherever electricity is not available.

Figure 1 shows the distribution of fuels for large engines. While heavy oil, which is predominantly found in marine applications, has approximately a 35% share and gas around 15%, diesel still accounts for the largest share. All in all, the trend toward the use of gas is clear. This is due to the lower environmental impact as well as the great availability of natural gas. The rapid technological developments of the past few years have also greatly contributed to this trend. One good example shown in Figure 2 is the development in the efficiency of General Electric’s Type 6 engine, which was made possible to a great extent by the longstanding, successful research cooperation between General Electric and TU Graz as well as LEC. Electrical efficiency increased by around 10% points to over 47%, which corresponds to more than 20% savings in fuel consumption. In engines of the 10 MW class that have a larger displacement, efficiencies of over 50% have been achieved. As a result, the gas engine has caught up with the diesel engine in terms of efficiency as well as performance. This is also apparent from Figure 3, which presents a basic evaluation of gas and dual fuel engines (engines that allow a choice to be made between operation with diesel and natural gas). Along with the excellent emissions behavior, this leads to greater use of gas engines. 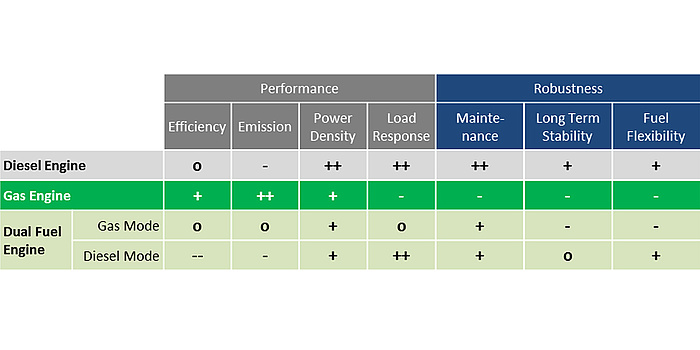 The gas engine still has drawbacks in terms of transient behavior, robustness and fuel flexibility, and the elimination of these flaws is one of the main elements of the research program of the COMET-K1 Center LEC EvoLET. The LEC EvoLET’s international network of leading research institutions and industrial partners, the COMET research program and the infrastructure of TU Graz offer ideal conditions for conducting cutting-edge research in this area.
This research project is located in the Field of Expertise Fields of Expertise „Mobility & Production“, on of TU Graz´s five focus areas.
Andreas Wimmer works at TU Graz's Institute of Internal combustion Engines and Thermodynamics. Since its inception in 2002 he has been leading the Large Engines Competence Center (LEC), which was turned into a COMET K1 Center in 2015.
Andreas WIMMER
Ao.Univ.-Prof. Dipl.-Ing. Dr.techn.
Institute of Internal combustion Engines and Thermodynamics
Inffeldgasse 19/II
8010 Graz
Phone: +43 316 873 30100
andreas.wimmer@lec.tugraz.at