Fairly Unknown, yet Rather Indispensable: Surrogates

Surrogates are substitute mixtures comprising a few chemical compounds that emulate the physicochemical properties of real mixtures which may consist of several hundreds or thousands of compounds. 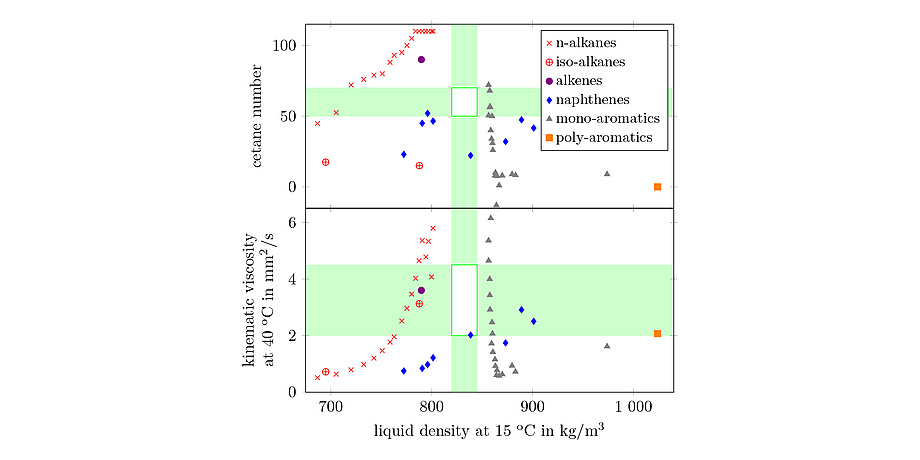 Figure 1: Density, kinematic viscosity and cetane number of typical fuel components together with the associated specifications for European diesel fuels (highlighted in green). The middle area indicates the area to be fulfilled simultaneously for both properties according to DIN EN 590. This must be hit by the resulting surrogate.

Commercial fuels are made up of hundreds of chemical components and are subject to significant compositional variation, depending on the underlying crude oil and the refining process and additives used, which may vary regionally and seasonally. In addition, engines all over the world should work with fuels of various standards and comply with their performance and emission standards. Another challenge is to make engines fit for the further addition of biogenic components today and to estimate their effects on performance and exhaust emissions.

The challenge: reducing diversity to the essentials

From these points of view, commercial fuels can only be used to a limited extent as a basis for engine development for a number of reasons. For example, the reaction mechanisms developed to simulate internal engine combustion can only consider about 40 chemical components. Furthermore, the application of rigorous thermodynamic models in simulation programs typically requires the availability of physicochemical data such as density, boiling point, transport properties, or cetane/octane number. However, only for a fraction of the components found in a real fuel these data are experimentally available or can reliably be estimated. Finally, the number of chemical components used in computer simulations is severely limited for computation time reasons.

Therefore, the aim of the working group was to develop fuel surrogates with reproducible properties consisting of only 5¬10 chemical components for which reliable property data and appropriate reaction mechanisms are available and which can therefore be used in computer simulations and test rigs to map the real behavior of commercial fuels.

From crude oil to diesel and petrol

Starting from crude oil, an algorithm for the optimization of surrogates was developed, and this was gradually extended to include diesel and gasoline. The algorithm is based on an optimization calculation in which the bulk properties of the real fuel are specified as target variables, and the composition of the surrogate is adjusted accordingly for optimal matching with these properties. Such targets include thermophysical properties such as density, viscosity and boiling curve, which are important for spray formation and other physical processes in the engine. On the other hand, further properties are taken into account for the characterization of ignition behavior and combustion, such as octane/cetane number, carbon-to-hydrogen ratio, calorific value or the threshold sooting index. Figure 1 illustrates the "target area" for two such criteria to be simultaneously met by the surrogate, along with the contributions of the substance groups used.

The algorithm uses a selection of about 100 typical chemical substances in the form of a database from which the surrogates can be assembled. Through close cooperation with the Dortmund Data Bank, the world's largest factual database for thermophysical property data, comprehensive experimental data and estimation methods for determining the required pure component properties are available.

Since optimization calculations can use different strategies to determine the optimal composition, such as "F to Enter" and "F to Remove," the computational burden of optimizing a surrogate can be up to a month, which is why these calculations use a Linux cluster provided by the Central IT Services of Graz University of Technology (see Fig. 2). 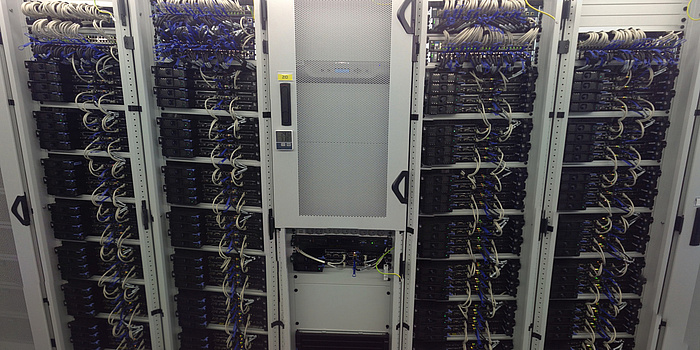 Figure 2: “Number cruncher” for surrogate optimization: the “dCluster” provided by the IT Services of Graz University of Technology.

Special emphasis was placed on assessing the addition of additives and biogenic components to fossil fuels. In the case of petrol, these are different alcohols and ethers; in diesel, fatty acid esters are added in the form of biodiesel. Predicting the effects of such additions using the algorithm is the basis for further increasing biogenic shares in commercial fuels and developing so¬called “design fuels”. Using the example of biodiesel, Figure 3 illustrates the change in the boiling curve with increasing biodiesel content from 0% to 20%. 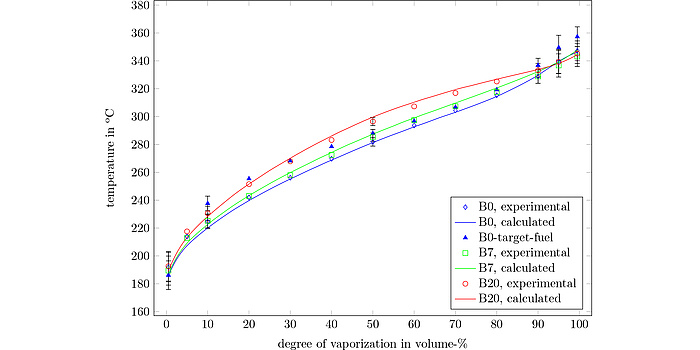 An outlook for the further development of the method is the direct coupling of CFD (computational fluid dynamics) software for simulation of spray behavior (see Figure 4) and reaction kinetics software for simulation of the ignition behavior with the surrogate algorithm in order to further increase its predictive accuracy. This was already implemented for the first time in a first interdisciplinary project together with the Competence Center Virtual Vehicle (VIF).

One "disadvantage" of fuel surrogates should not be concealed. Since they are mixed together from high-purity chemicals at pharmacy prices, the liter price of a surrogate can amount to several hundred euros – a real "premium fuel", so to speak! 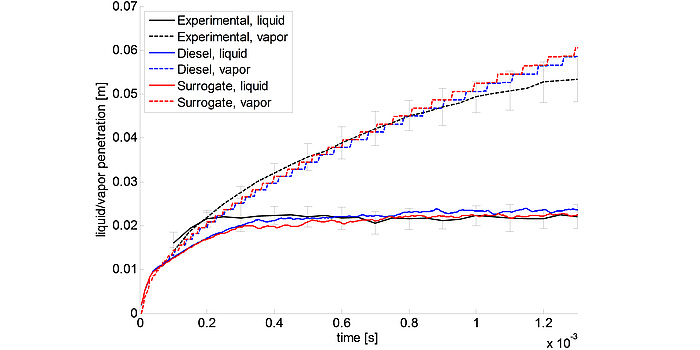 Figure 4: Results of CFD simulations for the vapor-liquid spray penetration behavior of a diesel fuel.

Thomas Wallek conducts research and teaches at the Institute of Chemical Engineering and Environmental Technology, and heads the working group "Process technology and thermodynamics of mixtures".