VerticalFarming: Lettuce from the skyscraper next door

Vertical farms are greenhouses – only the cultivated areas are not laid out next, but rather stacked up on top of each other. A Graz-Viennese concept combines structure with urban architecture. 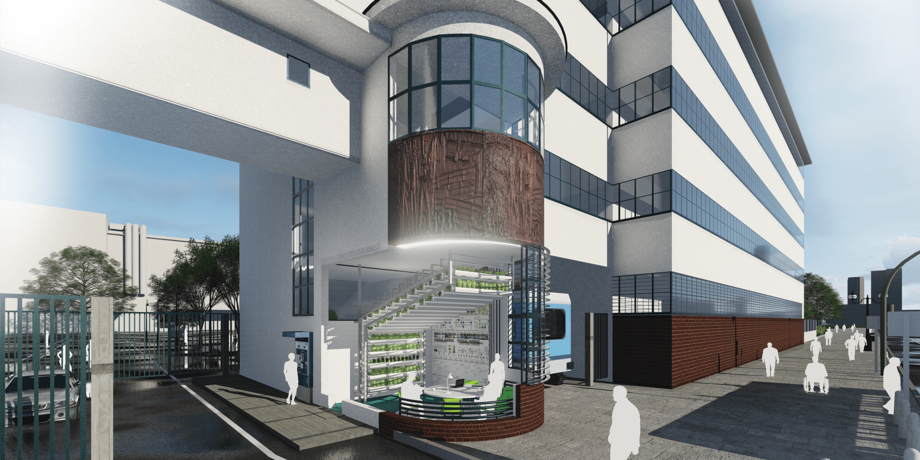 A vertical farm makes use of buildings to grow vegetables. The plants are transported to the windows by a lift system in order to get enough daylight.

Urban farming, in other words carrying out agricultural projects in urban surroundings has been a thing for years. Vertical farming goes one step further – a step upward, to be precise. Use is made of building façades to grow fruit and vegetables and to yield a proper return, on the one hand, and to create added benefits for the building in terms of energy technology, on the other. Many existing projects involving vertical cultivation resemble classic greenhouses – only laid out vertically, not horizontally. In Graz and at the Vertical Farm Institute in Vienna, the aspiration is to integrate cultivated areas into the architecture of buildings, thus using synergies and saving energy. “Our goal is to maximise cultivation area while at the same time minimising the necessary surface area – currently we can create up to 50 times more cultivation area on traditional farming surface areas. At the same time, we would like to design energy use as efficiently as possible and integrate the farm into the building symbiotically,” explains Sebastian Sautter of the Vertical Farm Institute in Vienna and staff member of TU Graz’s Institute of Building and Energy. Having dealt with the concepts for many years, he has now, together with colleagues in the exploratory project ”Vertical Farming“ , simulated a prototype farm in Vienna’s Urban Lakeside Aspern, and is about to launch a pilot experiment at the Tabakfabrik (former tobacco factory) in Linz.

The Vertical Farm Institute was founded in January 2016 by eight persons, among whom are staff of the Institute of Building and Energy at TU Graz. It serves primarily for research and networking in the vertical farming scene.

But everything in the right order. Vertical farms are greenhouses which are arranged vertically rather than horizontally. Today, classic greenhouses no longer grow their crops in soil, instead they use hydroponic systems with the plants being grown in so-called trays. The plant boxes are watered regularly with a blend of nutrients. “This also makes them very efficient regarding water consumption because the plants only absorb the water they need – the rest is recirculated,” explains Sebastian Sautter. In traditional greenhouses, the light the plants need to survive and thrive comes through a glass roof. “In vertical farming the light cannot come from above because the plants are stacked on top of each other. Light can only come into the greenhouse through the façade. This means the plants’ best exposure to light takes place directly via the façade. The idea is to transport the plants to daylight,” explains Sautter. “Plants don’t have to be exposed to light constantly. They can store light energy and you just have to supply the required daily ration of light. This makes them happy and they grow.”

In the exploratory project Vertical Farming funded by the Austrian Research Promotion Agency (FFG), researchers at TU Graz’s Institute of Building and Energy, the University of Natural Resources and Life Sciences, Vienna, (BOKU Wien) and Siemens are examining current findings in vertical farming and seeing where more research should be done. The project will be phased out in March of this year. The follow-up project is already in the planning stage: a pilot experiment at the Tabakfabrik in Linz.

Lift to the light

A kind of lift system has been developed at TU Graz which transports the plants to the light. The trays are hung and slowly vertically rotated. The plants thus receive the required light in a uniform way. On top of this, they can also get artificial sunlight in the morning and evening or on bad weather days. “We’re in the optimisation phase at the moment, and we’re investigating when the best time to turn the artificial lighting on and off is. At the moment we’re planning to turn it on at 4 a.m. and turn it off at approx. 10 pm. The plants need a dark rest period for about six hours a day.”

The purpose of the farms is not only to provide fruit and vegetables: optimising energy consumption is also an important topic. The trays can also serve as thermal insulation next to external walls, and are also able to use waste heat for better plant growth. They can also be positioned in areas facing south or west to provide shade and a good indoor climate. “We’ve got several ideas here, and we’re working on optimising them. Of course, it would be ideal to be involved in planning such a farm when constructing a new building. But they can also be integrated in existing buildings,” says Sautter. 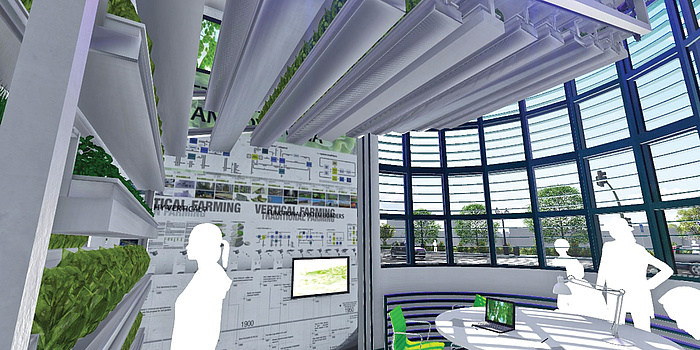 At the Tabakfabrik Linz the old porters lodge will be changed into a conference room with a build in vertical farm.

The first machine will be installed in the listed former porter’s lodge of the Tabakfabrik in Linz. “It’s not absolutely ideal because it faces north. But it’s wonderful and the windows look out onto a street – but it needs to be optimised for the users,” explains Sautter. It is intended to build the vertical farm behind the window façade and to move the trays on a slow circular path. Another arm, which extends into the room, is intended to be used for maintenance and harvesting. You can imagine it as a horizontal T. The technology group Siemens was able to be won over as a partner. Siemens wants to equip the trays with sophisticated sensors to measure the supply of water and light to optimise growth.

This is how the prototype in the Tabaktrafik in Linz should work: In this YouTube-Video the people responsible are introducing their plan.

The concept has been precisely designed to achieve a rich yield of fruit and vegetables. “At the same time we also want to reduce foodstuff waste. About a third of foodstuffs are currently thrown away due to transport waste. That wouldn’t happen in our case, of course, because the head of salad which is eaten or sold would be harvested directly,” explains Sautter. Transparency in foodstuff production is also an important topic. “At the moment I cannot at all say where my fruit and vegetables come from, even when it says on the package. We want to change this using visible growing areas and thus create trust among the customers.”

The Vertical Farming Institute is organising the Skyberries Conference in Vienna which runs from 28th February to 2nd March, and is part of the Urban Future Conference. You can pick up all the important information on the subject there, also from well-known speakers such as the mastermind of vertical farming, Dickson Despommier, and establish contacts in the scene. By the way, tickets are available at a discounted price for members of TU Graz – see contact box for details.