The HyCar2 is here: A second hydrogen research car for TU Graz

The hydrogen research centre HyCentA on the Inffeldgasse Campus of TU Graz has gained a new addition: a Hyundai ix35 with fuel cell is now in use for research on hydrogen as fuel. 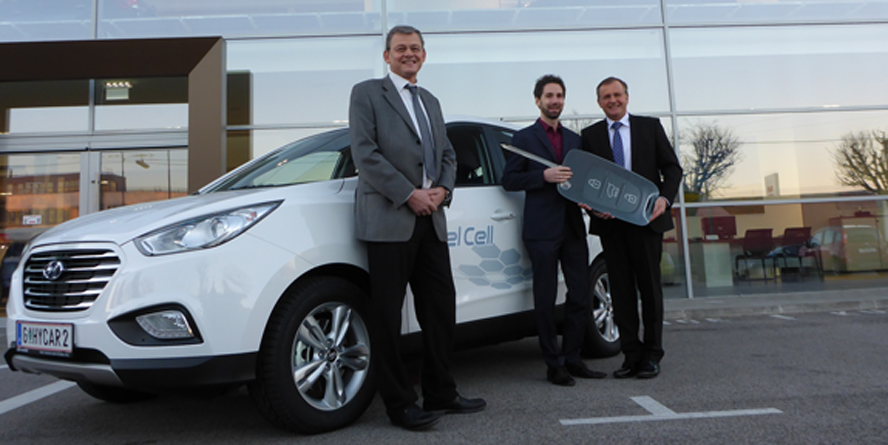 HyCar2, a Hyundai with fuel cell, is the new hydrogen research car at HyCentA and TU Graz. In the picture from left to right: Helmut Eichlseder from TU Graz, Alexander Trattner from HyCentA and Michael Heilmann from Hyundai with HyCar2.
The silver paintwork glistens in the sunshine, and on the number plate is written HYCAR 2. The Hyundai ix35 Fuel Cell has only recently been part of the research vehicle fleet of HyCentA at the TU Graz campus. What is special about this car is the hydrogen fuel tank under the boot – it is, namely, a hydrogen-powered electric car. The first one worldwide in series production. Interest in hydrogen, the most common element in nature, is bigger than ever. Produced in an eco-friendly way and free of pollutants when burnt, hydrogen is regarded as a future-proof alternative to traditional fossil fuels, such as oil and coal. Currently there is a range of unanswered technological and economic questions. HyCentA on the TU Graz campus – the only Austrian research centre dedicated to hydrogen – has been leading research in this promising field of hydrogen technology together with industry for eleven years now.

“Hydrogen reacts in the integrated fuel cell and is converted into electrical drive power. There’s nothing left over except water vapour rising up in small pollutant-free clouds,” explains Manfred Klell, the scientific head of the hydrogen competence centre HyCentA and associate professor at the Institute of Internal Combustion Engines and Thermodynamics at TU Graz. As a fuel, hydrogen yields electric mobility with a long range and short refuelling time. “And on top of this, hydrogen can be produced in an eco-friendly way and burns in a fuel cell without releasing any pollutants,” says Klell, explaining the advantages of HyCar2. HyCar1, a Mercedes with a combustion engine which can be driven by petrol, hydrogen and natural gas, will now have to move over and make space in the “research garage” at the TU Graz campus. HyCar1 has belonged to TU Graz and HyCentA since 2009 and was the first hydrogen-powered vehicle in Austria with a combustion engine.

HyCentA promotes the use of hydrogen as a regenerative energy source. Besides TU Graz as the main share holder, HyCentA Research GmbH also includes FVT (research society for combustion engines and thermodynamics), MAGNA STEYR Engineering and OMV as well as other well-known partners from science and industry. Together in 2005 they built the first Austrian research centre for hydrogen with modern test rigs for gaseous and liquid hydrogen at the Inffeld Campus of TU Graz – including the first Austrian hydrogen fuel station. Due to the increasing interest in hydrogen and the very good project workload, now 2 million euros is being invested in the expansion of the plant, including the most modern fuel-cell test bench in Europe.
Further information available on HyCentA's Website and in the press release on the occasion of HyCentA's 10th anniversary in October 2015 (german only)
Hyundai ix35 FuelCell “HYCAR 2”
2016: in series production worldwide, identical model can be ordered with petrol, diesel or fuel cell, 100 kW fuel cell and electric motor,
Hydrogen fuel tank: approx. 5 kg at 700 bar
Refuelling: approx. 5 minutes
Range: approx. 600 km
Road approval for HyCentA.
Project partner: TU Graz, FVT, OMV, MAGNA