Staying on the Right Path

Cooperative, autonomous driving on the motorway is the main topic of a joint project between TU Graz and the “Virtual Vehicle” competence centre. 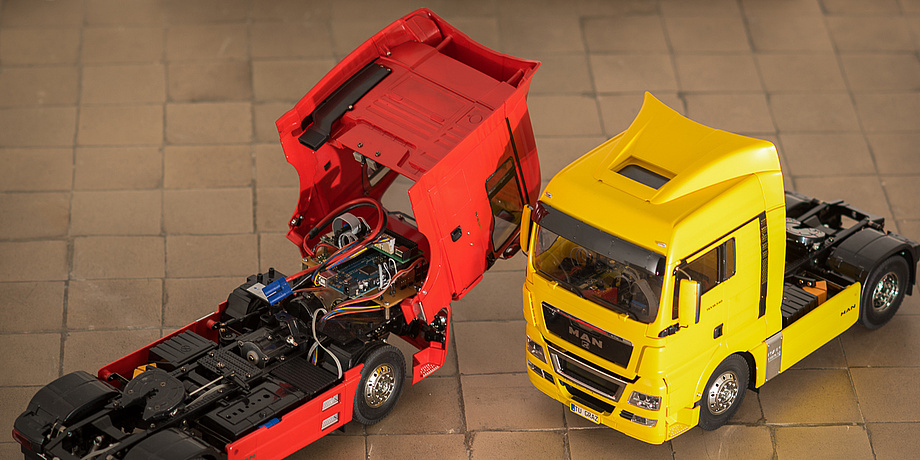 The system is tested in the laboratory with miniature HGVs.

Embedded in the Campus Inffeldgasse, researchers are collaborating on developing control algorithms which calculate the right path and the right speed for selfdriving vehicles.

At the Virtual Vehicle R&D centre, work is being carried out on promising vehicle concepts for both road and track. The competence centre funded by the COMET programme of the Austrian Research Promotion Agency currently employs some 200 staff occupied primarily with developing affordable, safe and ecofriendly vehicles.

Daniel Watzenig is head of Electrics/ Electronics & Software at the competence centre and works at TU Graz’s Institute of Electrical Measurement and Measurement Signal Processing. Since 2014 he has been occupied with a project called “TECAHAD – Technology Concepts for Advanced Highly Automated Driving”. Last year, together with Martin Horn, head of the Institute of Automation and Control, he brought out the book “Automated driving – safer and more efficient future driving”, which is published by Springer.

Doctoral student Astrid Rupp from the Institute of Automation and Control is responsible for the sub-area of “path planning”. She writes control algorithms which independently calculate and implement the safest and fastest route roughly every 100 milliseconds in the vehicle. 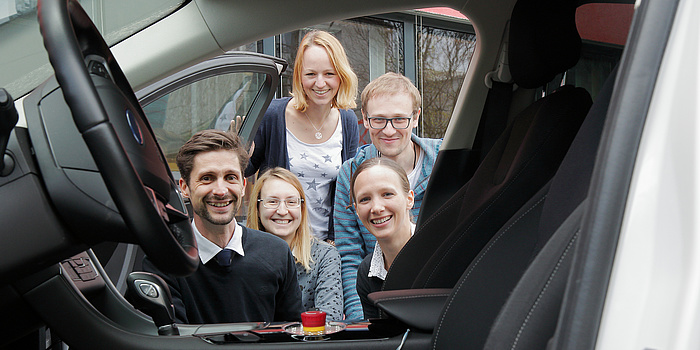 Astrid Rupp and the project team.

In practice it looks something like this: having joined the motorway, the driver sets the desired speed using the cruise control. The vehicle will attempt to keep to this speed for the duration of the drive and will calculate the most suitable path for it. Already in the run-up, the system would set a safe minimum distance between the vehicle and other road users and surrounding infrastructure. This will also be maintained for the required duration. By means of the installed sensor systems, the vehicle collects data about the environment, calculates the best path, checks the current route and speed, overtakes independently and adapts the speed to the actual conditions.

“If, for instance, a vehicle is driving in front of the autonomous vehicle more slowly, at some point the distance between the two cars will become less than the set minimum safety distance and the system could start overtaking. If the other lane is occupied, the safety distance would also be undercut if the autonomous vehicle changed lane. The vehicle will therefore decide to reduce speed first and possibly later overtake.“

“Parking sensors or lane assistants work in a similar way. They recognise independently in the same way when an obstacle is approaching and react with a warning signal. But we want the vehicle to calculate the right path by itself and take the right steps in real time in order to deal with the situation,” explains Daniel Watzenig. And Rupp adds: “In our system, different driving variations and safety corridors relating to the actual traffic situation are being continuously calculated anew. Of course, there is always a worst-case scenario when another vehicle behaves in an unexpected way.” This is an enormous challenge for control engineering. 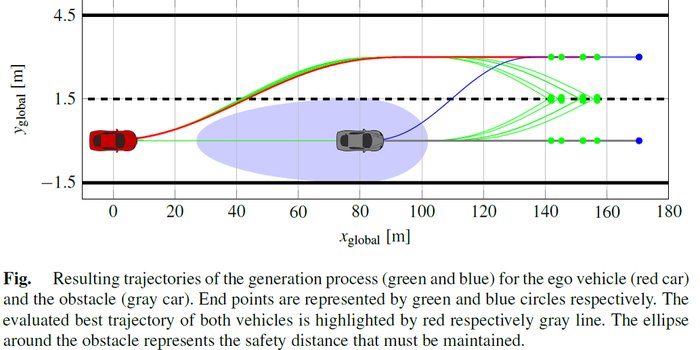 The planning inside the vehicle: a selfdriving vehicle overtakes another vehicle. The coloured region is the fixed safty corridor, the red and grey lines the ideal path.

The simulation on the computer has already been successfully completed. It is currently being tested using model HGVs in the lab and on the driving simulator. “Adapting the model vehicles in particular is a very popular student project,” relates Rupp. For the scientific world, the project would actually be completed with these results and the resulting publications. “But for our industrial partners in the competence centre we need to take it to a completely different level. The system has to be so far developed at the end of the project that it can go into series production in a few years,” explains Watzenig. What we now need are tests with real vehicles in real driving environments. We want to take this next step in the coming year. Parallel to the research and testing work, a Ford Mondeo has already been fitted out for tests on the test track and equipped with six radar sensors which are intended to replicate human sense perceptions. Following that, the control algorithms will be fed into the system and tested with specially trained test persons at the driving wheel. 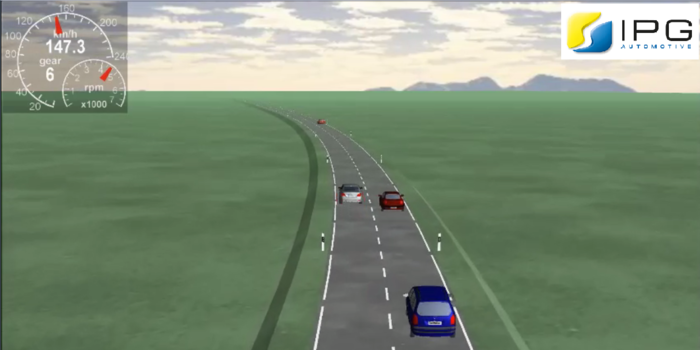 Simulation of the algorithm, which calculates the path for the selfdriving vehicle.

The research team hopes that the newly developed technology will then be taken up by companies and further developed. “We are not the right place to take this development onto the road. That will be done by the manufacturing companies,” says Watzenig. But he has managed it once. “Sometimes you find out when one of your own developments goes into series production. For my diploma thesis, for example, I developed a controller which was then taken up and a little while later could be found in every vehicle. That’s definitely a special feeling.”

This research project is attributed to the Fields of Expertise "Information, Communication & Computing" and "Mobility & Production", two of TU Graz' five strategic areas of research.