The research area of molecular electronics focuses on miniaturisation. It’s a further development of microelectronics and deals with circuits at the molecular level. 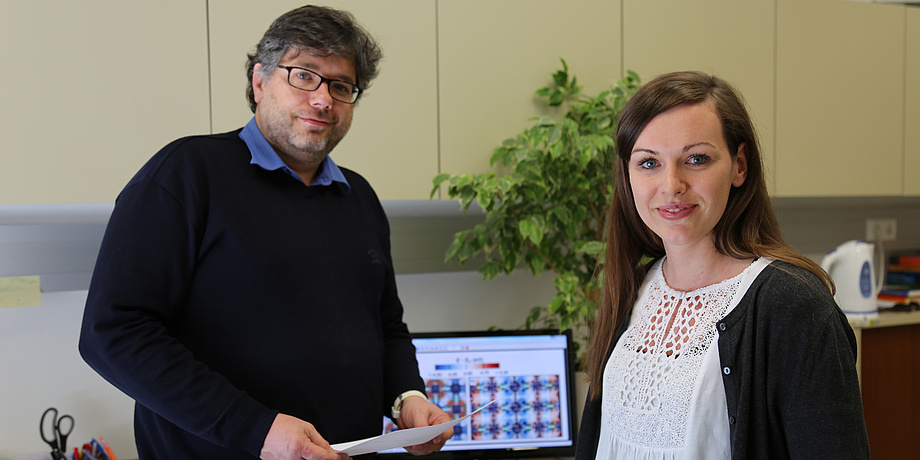 Electronic objects of daily life are becoming increasingly smaller – but at the same time more powerful and efficient. The research area of molecular electronics, a sub-area of microelectronics, aims at miniaturisation, and research in this field is being carried out at the Institute of Solid State Physics at TU Graz. At the centre of interest is how electricity can flow in individual molecules, molecular layers (i.e. in a layer of arranged molecules) and in molecular clusters. “Molecular electronics is the ultimate miniaturisation of electronics – single molecules suddenly become active elements and circuits become considerably smaller than they are, for instance, in microelectronics,” explains Egbert Zojer from TU Graz’s Institute of Solid State Physics.

But the international research community is currently not quite so far ahead: “We’re still miles away from an actual application. After a boom around the millennium, the community had to concede that it was all a lot more complicated than expected. Today, we’re concentrating on understanding the basics better,” says Zojer. At the moment, scientists want to understand how and under what conditions the processes work and applications would be possible. What is important is understanding exactly how electricity flows in molecular systems – for instance in applications in which components made of molecules are used. One example of this – something we hold in our hands every day – is the OLED display in a smartphone, which also consists of organic semiconductors.

As basic as it can be

The simplest components of molecular electronics are two electrodes connected by molecules. How the charge moves between the electrodes through a molecule is now being investigated. The role of so-called dipoles, which are partially negative on one side and partially positive on the other side, are increasingly being focused on in research. They are present, for example, on all interfaces between metal electrodes and molecules and develop a dominant influence as soon as molecules arrange themselves into more complex systems – in other words, into molecular clusters or monolayers. Here, they provide for strong shifts in the energy landscape and thus fundamentally modify transport characteristics.

This can be illustrated using an analogy. Imagine two beakers which are partly filled with water. In this illustration, the beakers stand for the electrodes, the water for electrical charges and the water level for the energies up to which the electronic states are occupied by electrons. There are pipe between both beakers, and – in order to conduct water from one beaker into the other – you now have to raise the water level in the first beaker to such a height that it can flow through the pipe. How high you have to raise the water level depends on the position of the pipes. The role of the pipes is assumed in the field of molecular electronics by the energy levels of the molecules and, as was demonstrated, their positions strongly depend on the size of the cluster, in other words on how many dipoles there are in the direct vicinity.

We have noticed that in the meantime there has been a large aha effect in the research community and people are starting to become more and more interested in these effects.

In the past simulations of transport monolayers have often been compared to experiments on individual molecules and vice versa. That these situations are, however, fundamentally different has often been overlooked by the research community, and was pointed out by Zojer and his team for the first time in 2012, and since then they have been drawing attention to it. “We have noticed that in the meantime there has been a large aha effect in the research community and people are starting to become more and more interested in these effects,” summarises Zojer. Veronika Obersteiner and Egbert Zojer, together with colleagues from Barcelona and Lyngby, discussed the situation concerning molecular clusters in a recently published work. They pointed out that in addition to the electrostatically caused shift of the energy levels depending on cluster size there are also distinct edge effects, in other words that the charge transport through molecules at the centre of the cluster differs strongly from the charge transport through molecules at the edge.

Of course, the influence of dipoles is not the only effect which has to be taken into account in molecular electronics. Its understanding, however, is a further important step in understanding the big picture of molecular components.

This research area is anchored in the Field of Expertise “Advanced Materials Science”, one of five research foci of TU Graz.

The paper"Unconventional Current Scaling and Edge Effects for Charge Transport through Molecular Clusters" has just been published in the journal Nano Letters, which is of central importance for the research community. This is one of four publications in renowned journals which came to be written in the framework of the doctoral thesis by Veronika Obersteiner and her supervisors Egbert Zojer and Oliver T. Hofmann.