Searching for traces: Recovering gold, copper and aluminium from waste.

In New Zealand he prospected for gold. In Graz Andreas Hauser and his colleague Markus Koch have developed a device which can recover non-ferrous metals from waste. 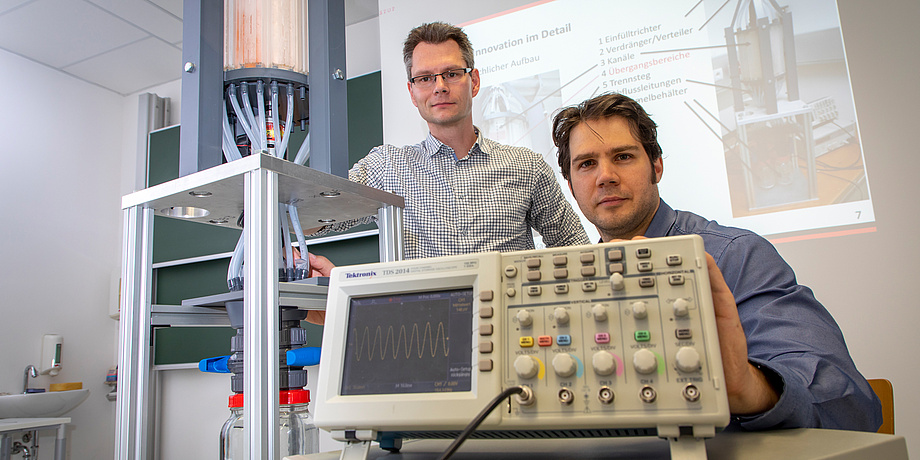 Markus Koch (left) and Andreas Hauser (right) present their prototype for the deposition of non-ferrous metals. © Lunghammer - TU Graz
Even today, searching for gold is still a common pastime in some areas of New Zealand. Andreas Hauser also tried out this hobby in his two-year work stay at Massey University, but as a scientist, he looked for a possibility to optimise the process straightaway. ‘The fact that there are still a few rivers carrying gold in New Zealand inspired me, and it was there that I built my first prototype even though it was extremely modest,’ explains Hauser. The challenge is to also screen extremely small particles successfully, and to do so in an extremely high material flow.

Via optimisation to precision

The industriy-oriented prototype which has meanwhile been developed by Hauser and Koch is the size of a fridge and is based on the principle of eddy currents. Strong magnets each with a 1 cm edge length are attached to rotating discs inside a cylinder. Their rotary motion results in a rotating magnetic field on the cylinder surface which produces an eddy current in non-ferrous metals which are trickling past. ‘We are aiming at particle sizes of about 1 mm or even less,’ explains Hauser; ‘Particles of such small size, however, react very weakly to a magnetic field. For this reason, the holding time of the particle in the reach of the field is very important.’ To raise this holding time, separation can also take place under water, the viscosity of which ensures that even the smallest particles are separated. To process river-borne gold, the material channels fastened to the outside of the cylinder are filled with water. A repulsion effect – conductive particles become themselves small magnets with reversed polarity for a short time – guide the non-ferrous particles along a different trajectory, and this enables separation from non-metals to be done. ‘Imagine it like this: when the conductive particle enters into the rotating magnetic field, it will be carried away by it,’ says Hauser, explaining the principle behind it. When separating aluminium, a pure separation from other particles is already possible.

The project of Andreas Hauser and Markus Koch was funded by PRIZE through Austria Wirtschaftsservice (aws) and was supported in terms of patent law and researches regarding exploitability and patentability. The Institute of Experimental Physics, headed by Wolfgang Ernst, participated in the project by granting materials and production services. 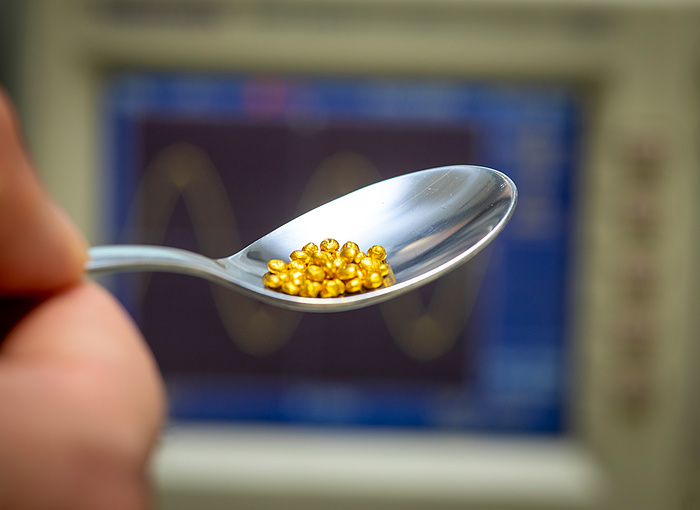 Gold nuggets with a size of about two millimeters can be separated very well with the prototype by Andreas Hauser and Markus Koch. © Lunghammer - TU Graz

Because today prospecting for gold is, apart from some exceptions, a rather exotic hobby, Hauser is looking for other possible applications of his technology – such as in the field of waste management. Together with his colleague Markus Koch, he is currently pursuing further development of the prototype with support from Institute head Wolfgang Ernst and TU Graz. ‘Many attempts were necessary before the prototype worked the way we wanted it to,’ says Hauser with a smile. The developed prototype could be used in particular for the recovery of residues from thermal waste recycling. Ashe left over from incineration is magnetically pretreated to remove ferrous metals. The non-ferrous metal parts can then be recovered by means of the traditional eddy current separator or by means of the new method depending on particle sizes.

At this year’s Phoenix prize awards ceremony, Hauser and Koch won second place with their submission ‘System for the recovery of non-ferrous metals from incineration residues in thermal waste recycling’. 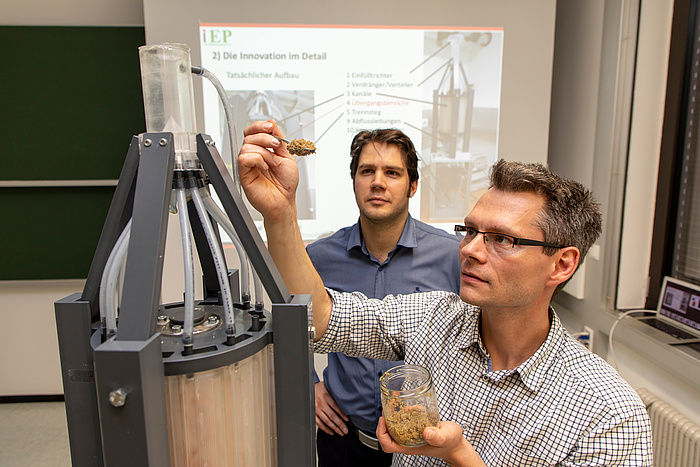 The possible fields of application for Hauser and Koch’s development are manifold and go beyond waste management since increasingly scarce raw materials are making the use of highly developed technologies necessary, for instance in mining. In waste management there is keen interest in the prototype developed at Graz, which was shown by this year’s Phoenix awards ceremony, where Hauser and Koch won second place. ‘Our aim was to produce a device that is built in an industrially oriented way and which can be taken up by an industrial research department in the field of waste recycling,’ says Andreas Hauser, detailing the original plans. Koch and Hauser are currently looking for international partners to license their invention.

The project of Andreas Hauser and Markus Koch was funded by PRIZE through Austria Wirtschaftsservice (aws). Through PRIZE, newly patented and patent-capable submissions are chosen by an expert jury from basic research carried out at universities and in cooperation with defined research institutes in the framework of a competition. The projects with the best chances of exploitation are financially supported so as to create a prototype from the invention. A prerequisite is need on behalf of small and medium-sized companies.
Andreas HAUSER
Ass.Prof. Mag.phil. Dipl.-Ing. Dr.phil. Dr.techn.
Institute of Experimental Physics
Tel.: +43 316 873 8157
andreas.hauser@tugraz.at Markus KOCH
Assoc.Prof. Dipl.-Ing. Dr.techn.
Institute of Experimental Physics
Tel.: +43 316 873 8161
markus.koch@tugraz.at