The Flight Simulation Research Platform at TU Graz makes it possible to scale the virtual heights with a wide-body aircraft and a light aircraft. 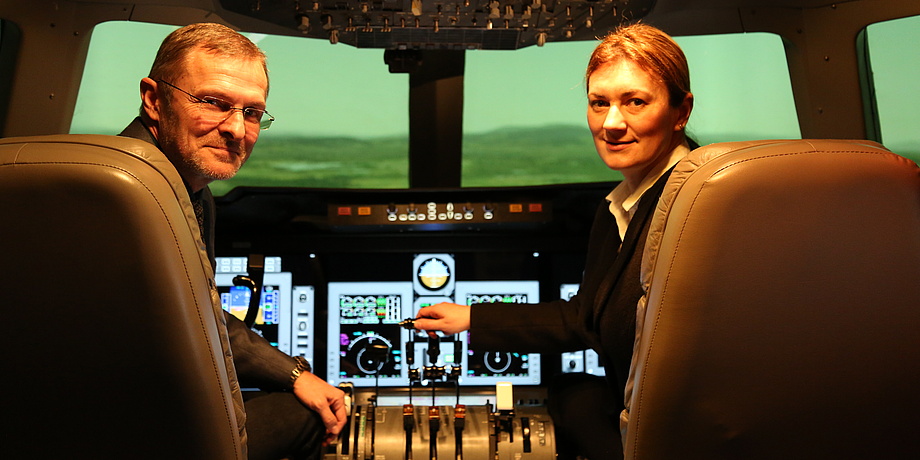 Reinhard Braunstingl and Iona Koglbauer in the cockpit of the wide-body aircraft simulator at TU Graz.

Modern wide-body aircraft are both safe and highly automated. Only in very rare cases do pilots have to fly manually, but they still have to be prepared for it. And the demands they have to meet are constantly rising due to increased air traffic – a fact which holds true for wide-body and light aircraft alike. “And this is precisely where the focus of our research activities comes in. With the help of our flight simulators, pilots can train for situations and manoeuvres that would be unthinkable in real life,” explains Reinhard Braunstingl from the Institute of Mechanical Engineering at TU Graz, and head of the Flight Simulation Research Platform. A highly experienced pilot and flight instructor himself, Reinhard Braunstingl has been working for over 20 years in the development of flight simulators. One of his areas of expertise is simulation algorithms.

The fleet of TU Graz comprises a simulator for wide-bodied aircraft and a simulator for light aircraft, and both facilitate a close-to-real flight training owing to the latest technology available. A wide-angle vision system projects virtual flight scenarios directly onto a curved screen right in front of the cockpit while mechanical control elements simulate a realistic application of force, and the sound system emulates detailed real-life sounds inside the cockpit. Here is the video, with Reinhard Braunstingl introducing the wide-body aircraft simulator. 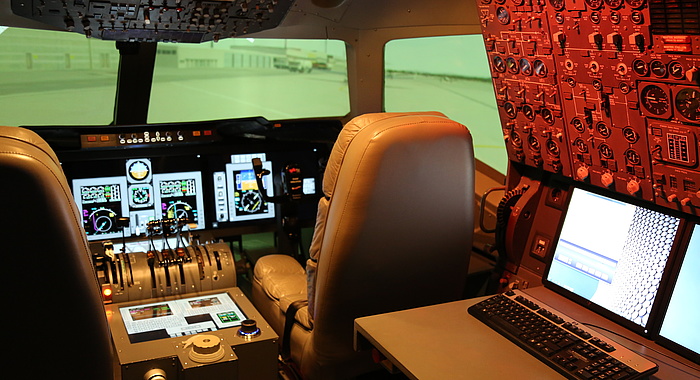 The cockpit of a wide-body aircraft simulator. The aviation cockpit of a DC 10 is equipped with a 3D sound system and highly sophisticated simulation cockpit including emulated flight systems with weather radar, ground proximity warning systems and flight management systems. The layout of the cockpit can be changed, thus enabling researchers at TU Graz to investigate and further develop cockpit systems. 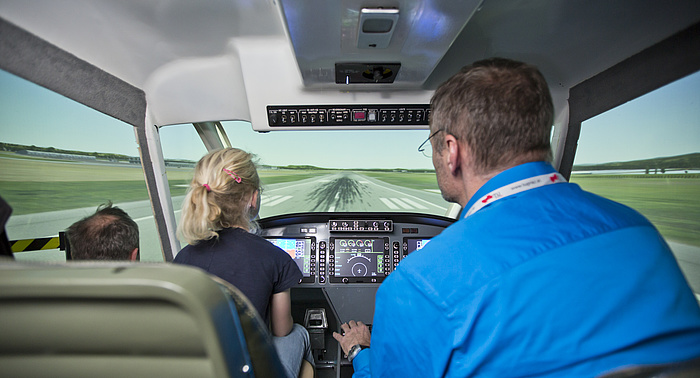 “The current training programme for would-be pilots of light aircraft does not aim at preparing them for specific traffic situations. Rather, the traffic rules are learned in theory, but are not trained for systematically,” explains the human factors expert, Ioana Koglbauer, from the Institute of Mechanical Engineering at TU Graz. In the course of the FFG Project ELFlight, the researchers at TU Graz have explored, among other things, the collision avoidance behaviour of flight trainees in uncontrolled airspace. This was done in the context of providing them with specific simulated scenarios of complex traffic situations with radio communication for training purposes. And the results? At first, the trainees mostly did not manage the situation adequately because they were not in a position to assess the situation appropriately. Having undergone additional training using the flight simulator, their capacity to grasp the training situation accordingly could be largely improved for implementation in real life scenarios.


The initial results of the ELFlight Project, which designed anew and explored the effectiveness of teaching methods and tools for improved flight training of future pilots, have been published in “Procedia Social and Behavioral Sciences” (1,2)and in “Cognition, Brain, Behavior”.

The “Human Factor” in new cockpit systems and displays

A further interdisciplinary research focus with the flight simulator as the main protagonist has been the development of new cockpit systems whose technologies are safe, efficient and easy to handle for pilots. “Today, when working on design concepts for new cockpit systems and displays, the aircraft manufacturers use virtual cockpits to start with, or they use hardware simulators in combination with virtual reality simulators. Through this approach, the user-friendliness of operating components and elements can be tested from an early stage on. This, in turn, allows for a significant reduction in development costs,” says Reinhard Braunstingl. As far as displays are concerned, a novel, “smart” collision warning system for visual flight was developed in the context of a doctoral thesis at the Institute of Mechanical Engineering at TU Graz.


During the Long Night of Research, often at least one of the flight simulators can be used by visitors!

The Flight Simulation Research Platform is operated by the Institute of Mechanical Engineering and the Institute of Engineering and Business Informatics at TU Graz. It comprises various national and international University institutes and companies. The simulators are the basis both for basic research and application-oriented projects. Students of TU Graz are thus in a position to attend and carry out courses and project activities.