Biotechnological production of chemicals using enzymes coupled with the photosynthesis of microalgae is the topic of the new EU project PhotoBioCat. TU Graz is the project coordinator. 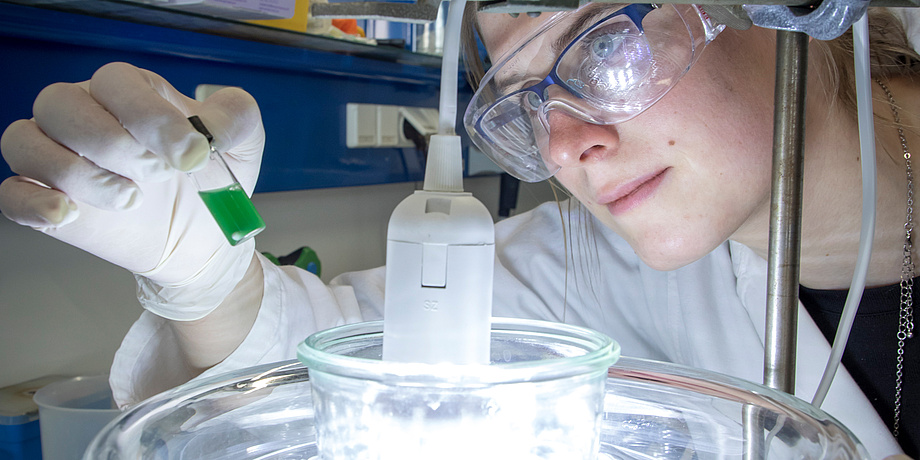 A carpet of blue-green algae can literally ‘cloud’ the summer’s swimming pleasure at the lake. This is caused by a few strains of photosynthetically active microalgae, also known as cyanobacteria. Other harmless strains of cyanobacteria have great potential for biotechnological applications and for this reason are much sought-after. In the EU project PhotoBioCat international doctoral students under expert guidance use light as a ‘fuel’ to accelerate enzymatic reactions by means of cyanobacteria. It is hoped that this will make the biocatalytic production of chemicals considerably more sustainable. The recently launched project is coordinated by a team led by Robert Kourist, head of TU Graz’s Institute of Molecular Biotechnology. The University of Graz’s Institute of Chemistry is also on board. The project is therefore part of the NAWI Graz network.

The project PhotoBioCat has two main areas of focus. In one area, the use of cyanobacteria as biocatalysts for light-driven biotechnological applications is being examined and tested in a range of industrially relevant model reactions. Chemicals for polymers, cosmetics and medicines are being increasingly technologically produced using enzymes to accelerate reactions. However, up to now the enzymes have had to be driven using reducing equivalents – very complex molecules which are very expensive to synthesise. Cyanobacteria carry out photosynthesis, in other words they transform low-energy materials into energy-rich substances purely with the help of light, water and CO2. If enzymes are genetically introduced into cyanobacteria, thanks to their catalytic function they will drive the chemical reaction, thus rendering the expensive reducing equivalent superfluous.

Project leader Robert Kourist explains: “If the enzymes are coupled to the photosynthesis of the cyanobacteria, expensive waste and by-products can be avoided and the biotechnological production of chemicals becomes easier, faster and cheaper.” Savings can be made on large quantities of NADPH (nicotinamide adenine dinucleotide phosphate), which at more than 1000 euros per gram is a very expensive reaction partner. But there is still a lot to do until then. “However, we know it works in the lab. The big challenge now is to transfer the process to an industrial scale,” says Kourist. The photosynthesis coupling will be tried out with several enzymes, thus expanding the future range of producible chemicals.

The second area of focus of the project will be on raising the efficiency by which light energy is harvested and can be passed on to enzymatic reactions (in vitro, in other words without living carrier organisms, such as cyanobacteria).

An algae lab at TU Graz

Microalgae have been growing and thriving in glass tubes and flasks in a controlled way at TU Graz for several weeks, and of course, not without reason. “A sub-area which we will look into very carefully in PhotoBioCat is growing algae for biotechnological use on an industrial scale. Cyanobacteria can be grown in special algae labs and irradiated with light. But after a certain degree of growth, the cells shade each other. The light has less effect, the algae cannot exploit their photosynthetic potential to the full and valuable reaction activity is lost,” explains project leader Robert Kourist.

PhotoBioCat as a doctoral students’ network

At the same time, the PhotoBioCat project is also an European network of doctoral students which will work on this light-driven reaction for biotechnological applications under the guidance of experts from 2018 to 2021. The 12 consortium members come from Austria, Germany, France, Portugal, Denmark and the Netherlands. Four doctoral students will work on the project at TU Graz’s Institute of Molecular Biotechnology and at the University of Graz’s Institute of Chemistry under Wolfgang Kroutil. Educational contents of the PhotoBioCat network will range from alteration of the energy metabolism of microalgae using modern tools of synthetic biology to driving biotechnological reactions through photosynthesis, the development of novel light-driven enzymatic processes and the development of photobioreactors.

This project is anchored in the Field of Expertise “Human & Biotechnology”, one of five research foci of TU Graz. At the University of Graz, it is part of the research core areas “Molecular Enzymology and Physiology” and “Environment and Global Change”. 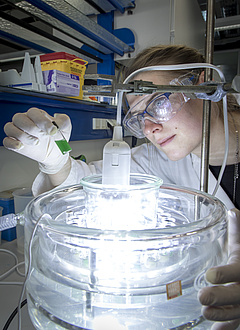 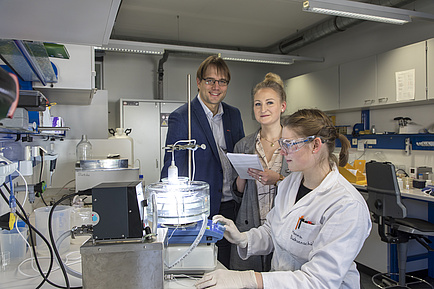 Project manager Robert Kourist with Sandy Schmidt and Hanna Büchsenschütz, both in the project team of "PhotoBioCat". © Lunghammer - TU Graz 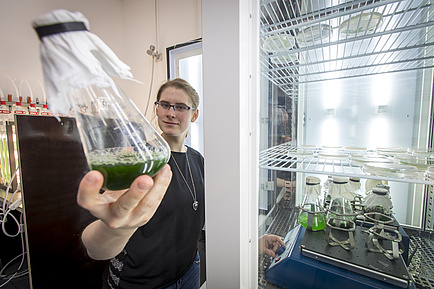 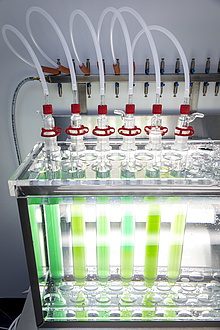