The pharma industry is in search of sustainable and cost-effective manufacturing processes for drugs. 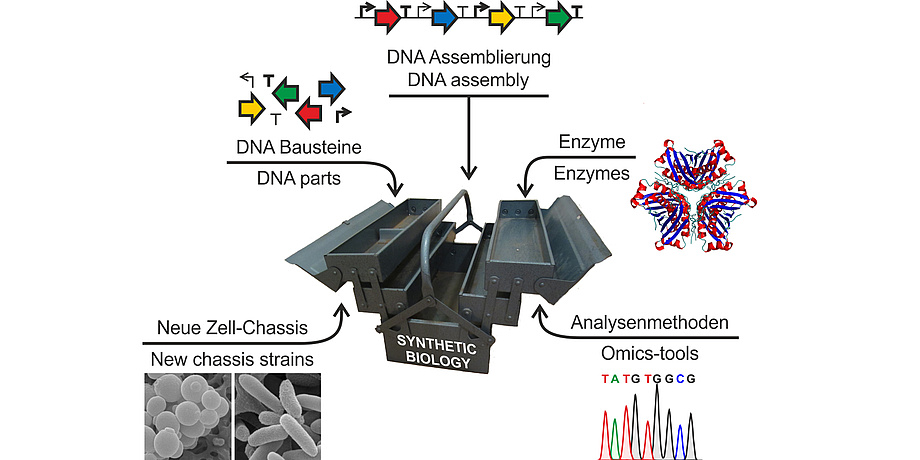 The toolbox of the synthetic biologist.

Classical drug production processes often require up to 100 kg of raw materials to manufacture 1 kg of the active ingredient of a drug. This inefficiency does not only constitute a problem for the environment, but is also responsible for the price of current medicines. In addition, the scarcity of precious metals such as platinum is an emerging issue in the pharma industry as they are frequently used as catalysts in many of the current synthesis routes. To solve these problems in a sustainable way, innovative alternative production methods are needed. The CHEM21 project funded by the EU and by the Innovative Medicines Initiative (IMI) is focused on the development of exactly such methods for the pharmaceutical industry of the 21st century.

In the CHEM21 project, research teams from the Institute of Molecular Biotechnology at TU Graz as well as from acib, the Austrian Center for Industrial Biotechnology, have been using concepts from synthetic biology in the production of drugs. Synthetic biology is a relatively young research area and aims to engineer and study non-natural biological systems for new applications, such as getting access to valuable compounds. One of the first realized applications and hence a prominent example for the power of synthetic biology approaches is the production of the anti-malaria drug artemisinin in the baker´s yeast Saccharomyces cerevisiae. However, the development of this yeast strain, which included the implementation of plantderived biosynthetic pathway steps in the yeast, took several years and required large amounts of research funds. For this reason, one goal of the CHEM21 project was to establish and evaluate methods to generate such tailored microorganisms in a more straight-forward way in less time. In this process, a “toolbox” with complementary elements was developed that can be used for the quick and simple construction of natural or synthetic pathways in bacteria and yeasts in the future.

The latest results are discussed in the lab.

Pathways for the biosynthesis of complex molecules usually consist of several reaction steps that are catalyzed by enzymes. These enzymes have to be produced in sufficient and balanced amounts in the host system. Therefore, promoters – genetic switches that regulate enzyme production – are important tools to increase the yields of the final product. For the biotechnologically relevant yeast Pichia pastoris, the CHEM21 team at the Institute of Molecular Biotechnology identified a set of promoters that vary in strength and regulatory profiles. Consequently, these promoters were used by acib scientists to successfully reconstruct pathways for the production of β-carotene (the orange pigment found e.g. in carrots) and violacein (an antibacterial purple pigment) in the yeast. The resulting colored yeast strains were not only great fun to work with in the lab, but the intensive coloration also indicated high product quantities.

For the simultaneous production of several enzymes, an alternative approach was tested. In higher organisms, each gene generally requires an individual promoter that drives its expression. This fact can cause problems particularly when large pathways consisting of 10 or more enzymes have to be reconstituted. In many cases, the sheer size of the DNA construct complicates all subsequent molecular biological steps. However, multiple genes can also be expressed using only one promoter. This polycistronic way of expression occurs naturally in bacteria while in yeasts specific DNA elements are required to realize it. It was shown in the CHEM21 project that self-processing 2A sequences constitute efficient tools for this purpose. For the first time, nine enzymes were produced polycistronically in Pichia pastoris, which resulted in functional biosynthesis pathways.

The implementation of biosynthetic pathways results in microorganisms with new features that can be exploited in the future production of drugs.

Some of the synthetic biology tools jointly developed in Graz, among them assembly techniques and modified platform strains with improved properties, have already been transferred to project partners from the pharmaceutical industry to evaluate their applicability on an industrial scale. It remains to be seen whether some of them will find their way into future manufacturing processes. Perhaps they will replace organic synthesis steps and advance the production of sustainable and cost-effective pharmaceuticals. The complementary expertise as well as the high degree of interactions between the Institute of Molecular Biotechnology and acib resulted not only in a successful completion of the project but also built the basis for tackling new challenges in the field of synthetic biology.

Martina Geier is a researcher at the Austrian Centre of Industrial Biotechnology (acib GmbH). Her current research focuses on the generation of engineered yeasts for novel synthetic applications.