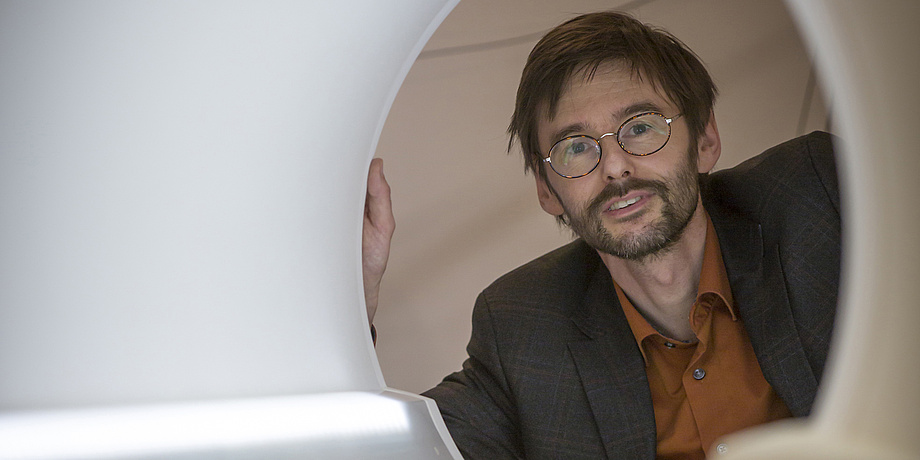 Magnetic resonance imaging (MRI) has become indispensable in modern medicine. It is an extremely powerful diagnostic tool with high spatial resolution, penetration depth and superb soft tissue contrast without the use of harmful ionizing radiation. Contrast in MRI is essentially obtained through differences in local proton density and relaxation times in the tissues of interest. Though extremely successful in morphological and functional imaging, MRI still suffers from low sensitivity when addressing molecular imaging. However, the development of molecular probes responsive to various pathologies and biological processes is opening up unique possibilities for medical diagnostics, and the development of corresponding non-toxic and biocompatible relaxation enhancers is thus highly desirable for MRI. The CONQUER project was motivated with this in mind, and involved a highly interdisciplinary and international team of experts in chemical engineering, material sciences, biomedical engineering, quantum physics and toxicology. CONQUER was coordinated at TU Graz at the Institute of Medical Engineering.

The basic idea is illustrated in Figure 1: Water molecules with protons in transversely magnetized state (blue) approach a quadrupolar nucleus (QN) close enough so that magnetic dipole-dipole coupling is established (1). In case of appropriately slow rotational motion of the complex, magnetization can be transferred to the QN (2) which then relaxes comparatively fast, passing the magnetization irreversibly to the environment (‘lattice’) (3). When there is a continuous exchange of water molecules, the effect leads to a significant drain of transverse magnetization from the bulk water which leads to image contrast enhancement in MRI (4). 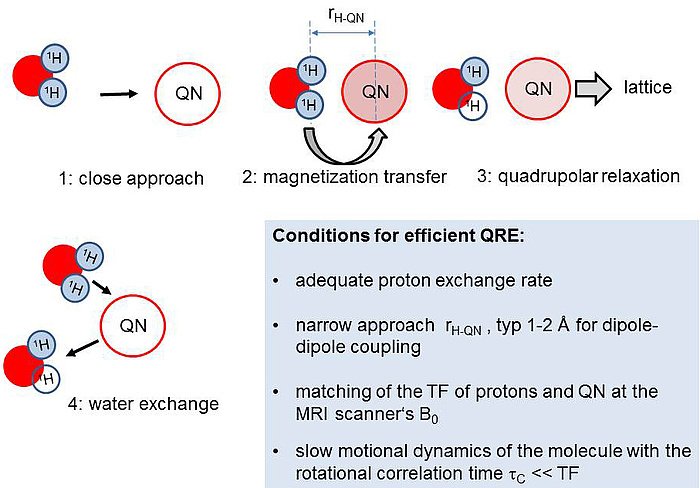 A quite similar process is known from established paramagnetic CAs where, however, it involves mainly the unpaired electrons rather than the nucleus and is not very selective with respect to the static magnetic field B0. In contrast QRE only occurs at distinct B0 where the proton transition frequency (TF) matches one of the TF of a QN. As shown in Figure 2 a QN has several TFs which depend on B0 and can lead to several matching points (red circles). Switching the scanner field from B0,1 (blue) to B0,2 (orange) activates the matching and thus QRE. In Figure 3 the TFs of the QN change due to a subtle change of the molecular structure of the CA, e.g. after binding to a certain tissue. Then one matching point may be shifted towards the scanner B0 and hence switch on the contrast, a key feature for molecular imaging. 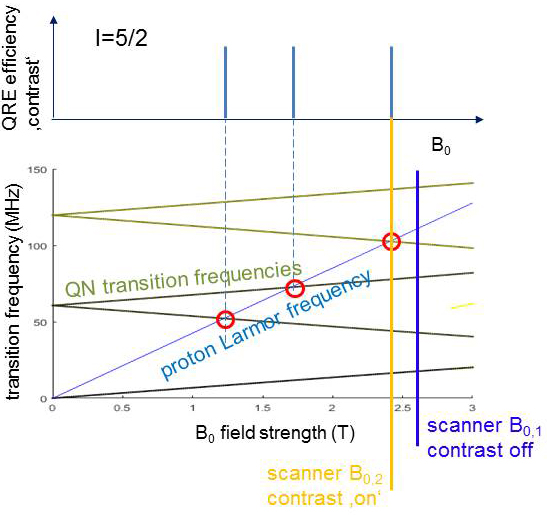 Figure 2: A QN (here spin 5/2) has several TFs (green) which depend on B0 and can lead to several matching points with the proton Larmor frequency (red), where QRE efficiency may be high and give contrast. Switching the scanner field from B0,1 (blue) to B0,2 (orange) activates the matching and thus QRE.

In order to rotate slowly enough in solution, the QN core compounds must be bonded onto nanoparticles with a diameter of >5 nm. Complex quantummechanical simulation programs developed in CONQUER predict a theoretical relaxivity enhancement of 5-10 compared to water for 10mM CA concentration after full optimization of several other parameters. These numbers make QRE indeed useful for practical applications. Thus a family of Bi-aryl compounds with several substituents was synthesised and an extremely versatile strategy for covalently bonding them onto different NPs was elaborated. Nuclear Quadrupole Spectroscopy (NQRS) revealed resonance frequencies close to target values for clinical scanners. A number of highly biocompatible functional NPs based on polysaccharide (PS), especially ethyl cellulose and Dextran, were synthesised. Then composite NPs with selected Bi compounds as well as polymercoated Bi-Aryl nanocrystallites were produced. 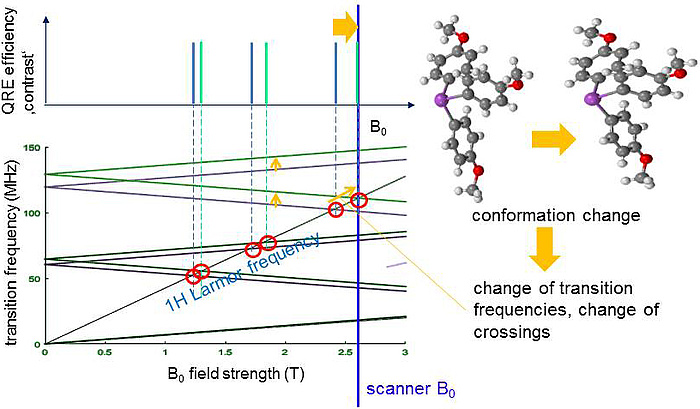 Figure 3: The TFs of the QN change due to a subtle change of the molecular structure of the CA, e.g. after binding to a certain tissue. The uppermost matching point is shifted towards the scanner B0 and hence switches on the contrast.

After comprehensive material characterisation, promising samples were investigated for QRE by Fast Field Cycling (FFC) NMR relaxometry. For testing QRE imaging, a clinical 3T MRI scanner located at TU Graz was equipped with an insert for FFC to shift B0 away from the nominal value. With this equipment the capability of generating contrast from B0-dependent relaxivity has been proven for the first time at 3T.

Finally QRE could indeed be proven in liquid dispersions of the Bi-Aryl nanocrystallites (see Figure 4). Though this effect was still too small for imaging, its observation is a remarkable breakthrough beyond state of the art and motivates further projects to optimize the NPs for size, water approach and exchange rate, structural order and quadrupolar parameters to push QRE towards a clinically applicable CA. To reach maximum contrast enhancement as predicted by theory, CONQUER has provided a unique and comprehensive knowledge-base, powerful numeric models, a generic synthetic concept for the Bi-compounds and the bonding strategy as well as unique experience in the preparation of the most promising NPs. 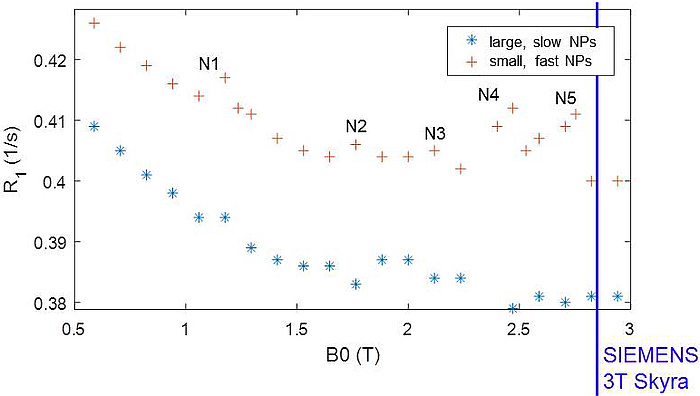 A patent has been submitted to the European Patent Office as an important step for the exploitation of the new technology and technology offers have been prepared to identify potential end-users, such as high-potential pharmaceutical companies. Generating and protecting the respective IP has created a unique European selling proposition. General information can be found on the Webpage www.conquer.at