“If I want to be cool, I mention Gyro Gearloose”

Dieter Schmalstieg is the most successful inventor at TU Graz. In the interview he reveals how he imagines the world to be in 100 years and how inventions can contribute to it. 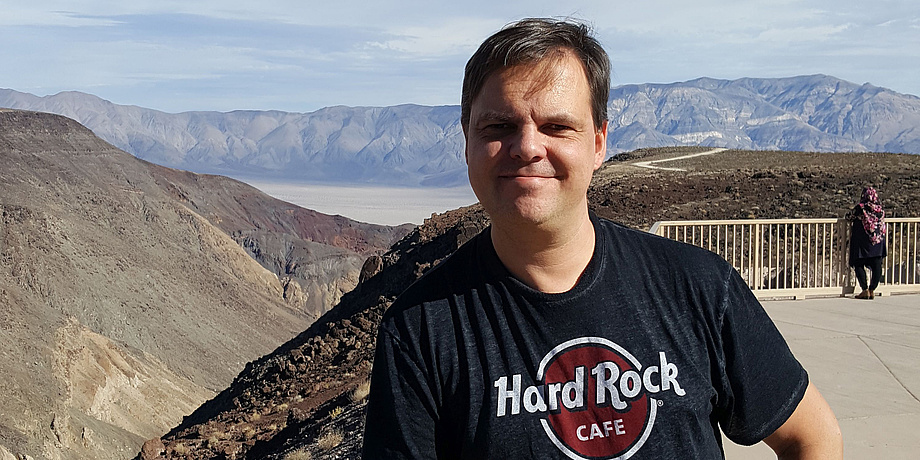 Seven patents in the last five years have made Dieter Schmalstieg, head of the Institute of Computer Graphics and Vision, the most successful inventor of TU Graz. He was honoured with the Nikola Tesla Medal for his work in mid November.

News+Stories: You were recently honoured as the most successful inventor of TU Graz. What does this prize mean to you?

Dieter Schmalstieg: I’m delighted to receive this accolade, but see it first and foremost as an achievement of the very successful cooperation with industry – in this case with Qualcomm – the partner company of the CD Lab, one of the world’s biggest semiconductor manufacturing companies – and only secondarily as an award for my research. Because for me patents and research are not the same thing.

So what are “inventions” in your view?

Dieter Schmalstieg: Regarding the Nicola Tesla Medal for being the most successful inventor, the number of patents which were granted to me was important. The legal basis for such patents, however, is not without its problems, and can lead in my view very easily to quantity over quality.

For me, inventions are new ideas for technical solutions which have a high potential for meaningful use.

For me, inventions are new ideas for technical solutions which have a high potential for meaningful use. In my view, what really counts primarily is “new” – patents are often not really so new – and “meaningful”. And if something is meaningful, that doesn’t mean at all that an idea manages to interpolate itself into everyday life. Someone has to take a certain entrepreneurial risk to make an exploitable product out of the idea.

How much does the classical romantic idea of an inventor like Gyro Gearloose conform to your actual workaday life?

Dieter Schmalstieg: I like mentioning Gyro Gearloose very much so I can look cool in front of my children, instead of being a boring professor. Actually my job is really exciting when I find time to just think, freely and informally, or to discuss with other researchers.

I like mentioning Gyro Gearloose very much so I can look cool in front of my children, instead of being a boring professor.

For this reason, I value academic basic research very much, where you can conduct research without any economic pressure. Inventing is a tedious process – but Gyro Gearloose always manages to get things done in the next comic picture! Of course, in reality it’s not like this at all.

At the moment you’re working in application-oriented research.

Dieter Schmalstieg: Yes I am. Right now, I’m talking to you from San Diego in California, where I’m doing a research stay at our partner company Qualcomm. We are working on wireless Virtual Reality goggles.

In Augmented Reality, I see a possibility of replacing the constant staring into a mobile phone display and nevertheless being able to use all the opportunities which technology offers us.

Augmented Reality is currently my main field of research. AR Is a symbiosis of computer graphics, computer vision and human-computer interaction. The visual field of the user is overlaid by computer-generated information, thus expanding reality with information. This information is not only related to the location or the respective situation, but rather depicted in such a realistic and tailor-made way that, in the ideal case, it is not possible to distinguish between real and virtual. In Augmented Reality, I see a possibility of replacing the constant staring into a mobile phone display and nevertheless being able to use all the opportunities which technology offers us. Areas of application will include navigation, repair and maintenance, learning and training, inspection and diagnosis in industry and medicine.

While we’re talking about the future, how can inventions change the world?

Dieter Schmalstieg: I’m currently the best example. I’m working in California, but you can see me from Graz in a video conference. By the way I am not a good futurologist and in 1993 I didn’t even believe that web browsers would be successful! So be a bit careful about my visions! (laughs). But I think that the constant availability of information and communication channels will influence us in areas in daily life which we simply can’t imagine today.

By the way I am not a good futurologist and in 1993 I didn’t even believe that web browsers would be successful!

I imagine in a couple of decades we won’t be steering cars any more and, in fact, we won’t even possess them. Children will be taken to school in autonomous e-cars. There won’t be any fuel stations anymore. Groceries will be delivered by drones. Such technical developments, in my opinion, will be very important for climate protection. We could all benefit if only politics would pay more attention to expert knowledge.

The big question for me is, through all these technical improvements, how will we use this preciously won time meaningfully?

Is there just one or are there several inventions which, in your view, crucially influenced the world in the last 100 years?

Dieter Schmalstieg: Obvious examples are the mobile phone (and subsequently the smartphone) and the computer. Of course, these achievements have not just had positive consequences. The information society itself hasn’t only unleashed a strong generational conflict, it has also produced many social developments. For example, just look at the new possibilities of surveillance – something we can’t properly deal with – neither politically nor legally.

Dieter Schmalstieg: The holodeck... Seriously! Telepresence systems, which would make business trips unnecessary, would be a wonderful thing.

What did you want to be as a child?

Dieter Schmalstieg: An engine driver – not quite the direction I work in today, but at least engineering in the broadest sense of the word.

The Knowledge Transfer Centre South (WTZ Süd) honours the most successful inventors of all the Graz universities in mid November – 86 of them come from TU Graz. In the framework of this event, Dieter Schmalstieg  was awarded the Nikola Tesla Medal from TU Graz for being the most successful inventor at the University with a total of seven granted patent applications in the last five years.

Schmalstieg studied at TU Wien, gained his doctoral degree in 1997, and habilitated in 2001. In 2004 he became a full professor at TU Graz, where he opened the Christian-Doppler Lab for Hand-Held Augmented Reality in 2008 together with corporate partners.