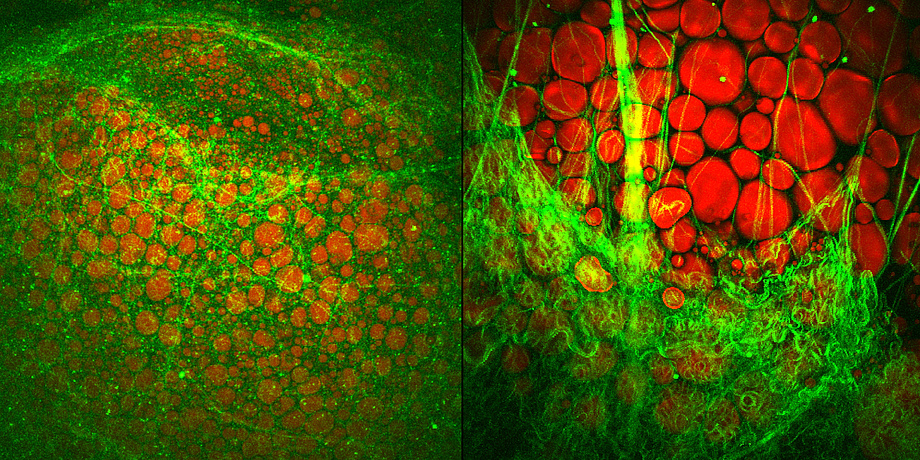 Fat cells are not all the same. We possess both white and brown fat cells, and they carry out different tasks in our body. Whereas white fat cells store fats ingested in our food and constantly grow in the case of excess caloric intake, brown fat cells are good "burners". This is because they possess a large number of mitochondria which make the fat cells appear brown. The purpose of these cellular power stations, among other things, is to obtain energy. Brown fat cells are also the place where a particular uncoupling protein is synthesised (uncoupling protein-1, UCP-1). This protein allows the energy produced from fatty acid oxidation to be converted directly into heat energy instead of being stored – as in white fat cells. 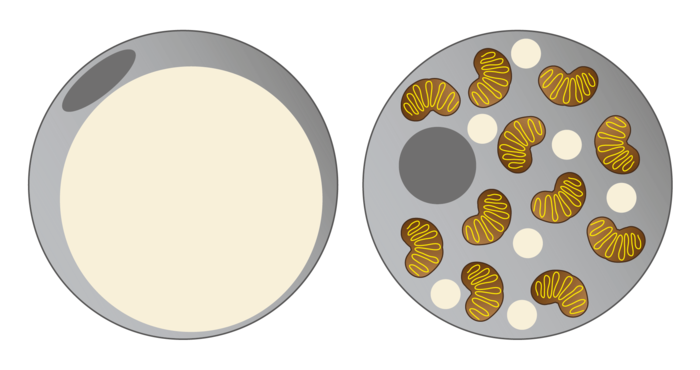 In a white fat cell (left) the lipid droplet in which fat is stored almost fills the entire cell. Brown fat cells (right) possess several lipid droplets, but store less fat and at the same time contain a high density of mitochondria, which are responsible for the metabolic activity and the colour of these cells.

Brown fat tissue ensures that the body temperature of newborns remains constant despite the large surface area of the body and the comparatively small muscle mass. Until recently it was accepted that the deposits of brown fat tissue regress and are no longer present in human adults. But in 2009 researchers were able to prove that adults also possess brown fat cells in the neck region. Since then much research has been carried out on how effective they are. Because in very overweight persons these brown fat deposits are only active to a small degree or are not present at all.

At the Institute of Biochemistry at TU Graz, the research group led by Juliane Bogner-Strauss are dedicating themselves to this subject at a molecular level. In a project funded by the Austrian Science Fund (FWF), the researchers want to discover what fundamental switching circuits and paths control the development of brown fat cells and their activity. As early as 2013 they were able to identify a protein – N-acetyltransferase 8-like (NAT8L) – in the mitochondria of brown fat cells which influences their activity.

N-acetyl-aspartate: a molecule with a double mission

NAT8L is the enzyme which enables production of a particular amino acid, N-acetyl-aspartate (NAA), in mitochondria. "NAA was only recently known to be an essential intermediate product of lipid and cholesterol synthesis in the brain. We were able to show that NAA doesn’t only play an important role in the brain, but also controls the activity of brown fat cells," explains Juliane Bogner-Strauss. In a recently published study, the Bogner-Strauss team were able to show that not only production, but also the breakdown of NAA is responsible for increasing activity in brown fat cells. Because if NAA accumulates in brown fat cells and cannot be broken down, this surprisingly has a negative effect. "We’ve established in our in vitro experiments that increasing concentrations of NAA in brown fat cells lowers their metabolic activity. The real key role is played by an enzyme which actuates the breakdown of NAA in the cytosol of the fat cell," says Juliane Bogner-Strauss.

If this enzyme which is called aspartoacylase is inhibited, less cytosolic acetyl-CoA is available to the cell, thus decreasing histone acetylation in the cell nucleus of the fat cell. Histones are proteins which are tightly "wrapped" around the DNA. Through acetylation they loosen themselves, and the DNA can then be transcribed by the transcription machinery. If histone acetylation is lowered, fewer genes are transcribed and accordingly fewer proteins synthesised, such as uncoupling protein UCP-1, which is essential for the activity of brown fat cells. 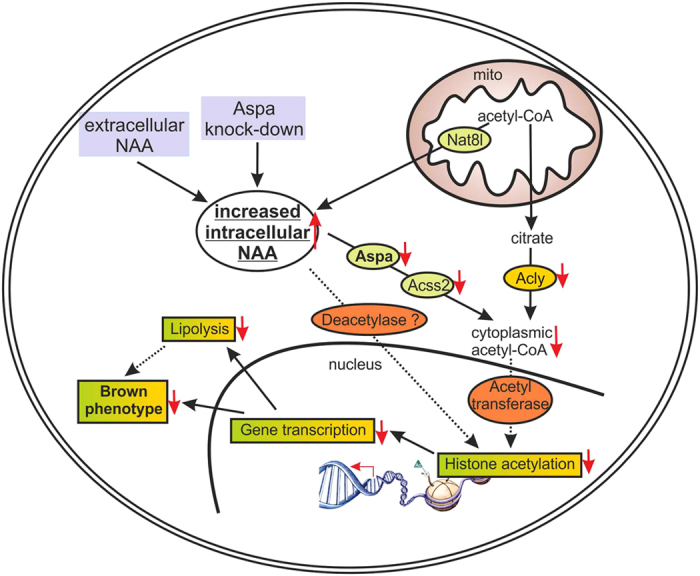 Scheme of the NAA signal path in a brown fat cell: If the enzyme activity of aspa in the cytosol of a brown fat cell is reduced, the concentration of NAA in the interior of the cell (cytosol) rises and consequently less acetyl-CoA becomes available to the cell nucleus. By means of the signal chain being triggered in this way, fewer proteins which are crucial for the metabolic activity of the brown fat cells are synthesised.

NAA signal path as a possible therapeutic point of attack

The results of the study are especially relevant for research into obesity and diabetes since altered NAA values have been measured in the urine of persons with obesity and type 2 diabetes. "What is particularly interesting here is that NAA occurs in foodstuffs and can enter the fat cells through food intake and could thus influence signal paths," explains Bogner-Strauss. In vivo studies in cooperation with colleagues at the Max Planck Institute for Immunology and Epigenetics in Freiburg could soon shed more light on the matter. "In any case, our current results highlight the signal path as a possible target for developing therapeutic interventions in obesity research," concludes Bogner-Strauss. 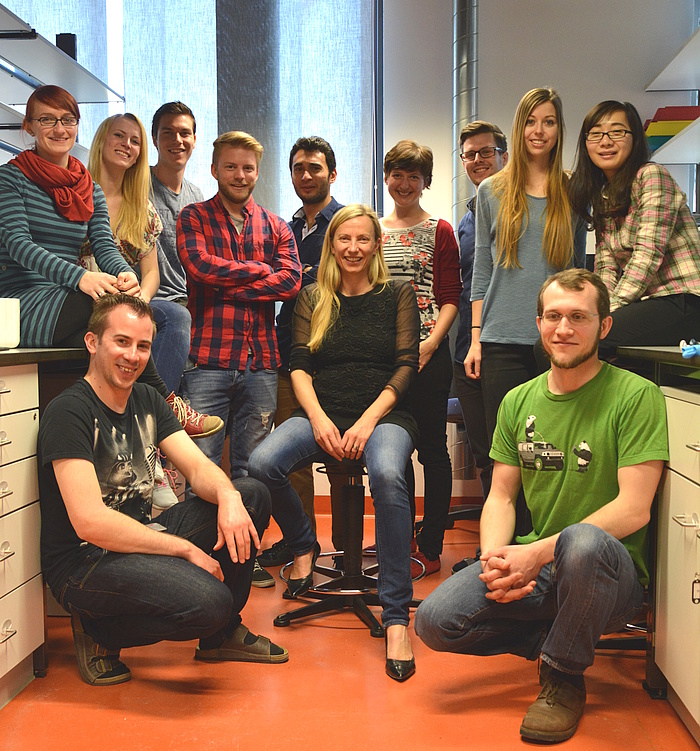 Juliane Bogner-Strauss and her team at the Institute of Biochemistry at TU Graz.

This research topic is attributed to the Field of Expertise "Human & Biotechnology", one of TU Graz' five strategic areas of research.

The current publication of the research group led by Juliane Bogner-Strauss has been published in the journal Scientific Reports.