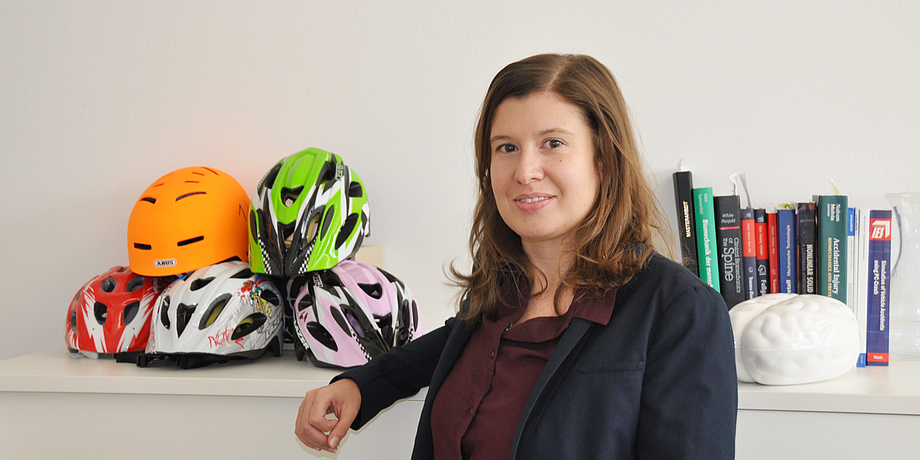 In 2015, more than 26,000 people died on the roads of the European Union and nearly every second traffic fatality is a so-called vulnerable road user (VRU), which are pedestrians, bicyclists ore motorcyclists. “For this reason, regulations are becoming stricter regarding the protection of VRUs. For example, pedestrian protection is a fixed component of Euro NCAP ratings, a consumer information organisation which carries out crash tests and evaluates the safety of vehicles,” explains Corina Klug. The 29-year-old PhD student at the Institute of Vehicle Safety at TU Graz is dedicated to accident research in this field. But more precisely, she’s dedicated to so-called human body models – in other words, highly complex finite element simulation models which model biomechanical properties of humans under high dynamic loads. “Using the simulations we can calculate stresses of individual body parts in the case of diverse collisions on the vehicle. This enables us subsequently to make a risk assessment as to whether a human would be injured in a particular situation,” says Corina Klug.

Crash test dummies, which have been implemented in the current legal regulations to test the passive safety of vehicles, have become technically more and more sophisticated in the last decades. But real crash tests are very costly and time consuming, and can only represent the wide variety of road users in a limited way. “When developing crash test dummies, you start with the ‘standard human’. The most often used dummy corresponds to the average measurements of a man – it weighs 78 kilograms and has a height of 1.75 meters. In other words, it doesn’t even cover the whole population. Computer simulations are becoming increasingly more relevant because they can undertake investigations for each height and age group,” explains Corina Klug. Furthermore, using human body models researchers can deduce injuries directly.

At the moment, along with her colleagues, the doctoral student at TU Graz’s Institute of Vehicle Safety is working meticulously on suitable methods so that independent organisations like Euro NCAP can evaluate pedestrian safety in the future using numerical models. “For the assessment of active bonnets, simulations using human body models are being used for the first time in safety ratings – a genuine milestone,” exclaims Corina Klug. In the case of a collision, active engine bonnets are deploying and thus are increasing the crumple zone between the person and the car, thus reducing the injury risk for pedestrians.

In the CoHerent project funded by Euro NCAP, Corina Klug and her colleagues at TU Graz developed a method which makes the results of different human body models comparable in various codes.

What agar-agar and crash tests have in common…

The mechanical engineering student developed a passion for the topic during her diploma thesis: “I was always interested in medicine, and as the “Modelling of cerebrospinal fluid” diploma thesis was advertised at the Institute of Vehicle Safety, I applied for it straight away,” she recounts. The fluid between the skull and the brain protects the brain in the event of a collision. “The objective was to validate a numerical model using experiments. One task was to find a suitable material most closely approximating to the mechanical properties of the brain.” The result: agar-agar. When dissolved in hot water, the plant-based powder forms into a gel which is very similar to animal gelatine and is often used as a gelling agent.

The subsequent project "Clever Helmet" project looked at how to test bicycle helmets for children more realistically. Consumer organisations regularly carry out such tests in which a head model protected by a bicycle helmet impacts with the ground vertically. But – just to single out one aspect – in reality the head usually impacts with the ground at an angle and the cyclist is likely to roll over his head. Corina Klug and her colleagues extrapolated recommendations for future tests from the results of the study and these have been underpinned by international research groups.

On the safe side – also in leisure time

Apart from simulations and crash tests, what effects does her passion for research have on her life? “I wear a reliable helmet when cycling. And because as an ardent traveller to Southeast Asia I often find myself in countries whose road safety standards are not like in Europe, the lack of safety tends to catch my eye.”

Corina Klug is currently a PhD student and project assistant at the Institute of Vehicle Safety at TU Graz. She won the Young Scientist Award at the international “Human Modeling and Simulation in Automotive Engineering” symposium in Heidelberg, Germany, in October 2016 for her presentation “Methodology for kinematic comparison of human body models for pedestrian simulations”.
Corina KLUG
Dipl.-Ing.
Institute of Vehicle Safety
Inffeldgasse 23/I
8010 Graz, Austria
Phone: +43 316 873 30329
corina.klug@tugraz.at
www.tugraz.at/institute/vsi