New types of vehicles have to prove their conformity to emission standards in thetype approval test. Previous procedures were criticized for insufficiently reflecting the real driving pattern. 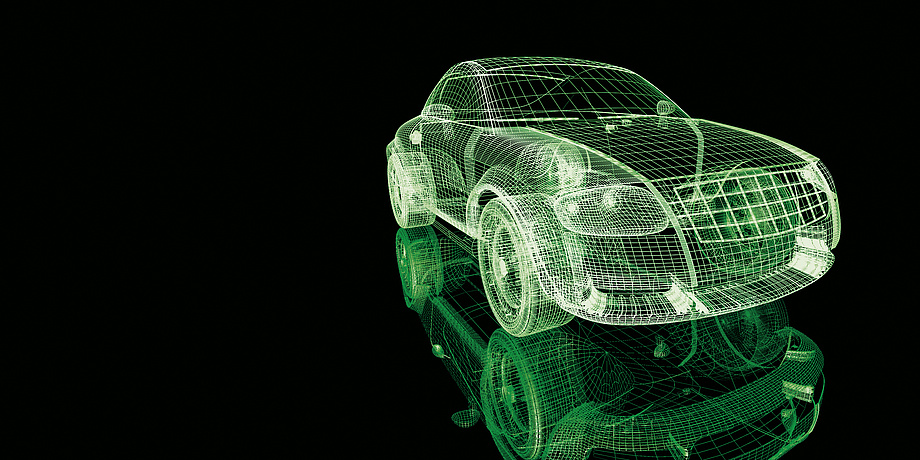 [Translate to Englisch:] Eberhard Schutting ist Teamleiter im Forschungsbereich Antriebssysteme des Instituts für Verbrennungskraftmaschinen und Thermodynamik.
Thus, end of 2017, the regulatory authorities (the EC) introduced a new test procedure that includes the measurement of emissions during real¬world driving, commonly known as RDE legislation (Real Driving Emissions). Continued tightening of emission limits will keep this legislation a major research target (Euro 6d comes into force in January 2020). At the Institute of Internal Combustion Engines and Thermodynamics, researchers are investigating strategies to fulfill the RDE legislation with passenger car diesel engines. The extensive experiments and simulations are covered by the international research project “ECO Powerdrive 2”. The RDE legislation demands the compliance with emission limits under widely varying conditions: urban and highway driving, summer and winter, aggressive and defensive driving. This is an enormous challenge for the exhaust gas after-treatment system. One of the biggest problems is to achieve and maintain the operating temperature of the catalysts.

The exhaust after-treatment catalysts need a certain temperature window to work properly. In Diesel engines, it is the lower threshold of ≈200 °C that poses a problem. Diesel engines have a comparably low exhaustgas temperature, making it difficult to reach this temperature fast, or, sometimes, at all. 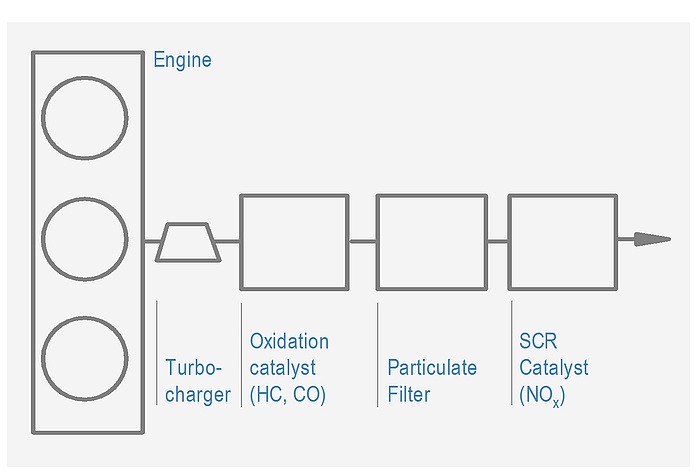 Typical arrangement of catalysts for current legislation.
The farther away a catalyst is mounted from the engine, the slower it becomes warm. A typical catalyst arrangement for the current legislation is shown in Figure 2. The conversion of carbon monoxides (CO), hydrocarbons (HC) and nitric oxides (NOx ) requires two catalysts. A particulate filter completes the system. It can happen that the threshold temperature is never reached, for example in a very slow urban driving cycle, see figure 3. It is not difficult to heat up an exhaust system in a very short time, but it is a challenge to do it as efficiently as possible. The team of the ECO Powerdrive 2 investigates various solutions to this problem, two of which are outlined below.

The application of an electric heater is an obvious and surprisingly efficient method. It will heat up the catalyst after, or even before, the engine is started using electrical energy from the battery. It works more or less like a seat heater but with twenty times more power. The so called “catalyst light-off” can in this case be reached after only 100 seconds. Without heating, it would take 11 minutes to reach the temperature of 200 °C (using the example of the more distantly mounted SCR catalyst). See figure 4. 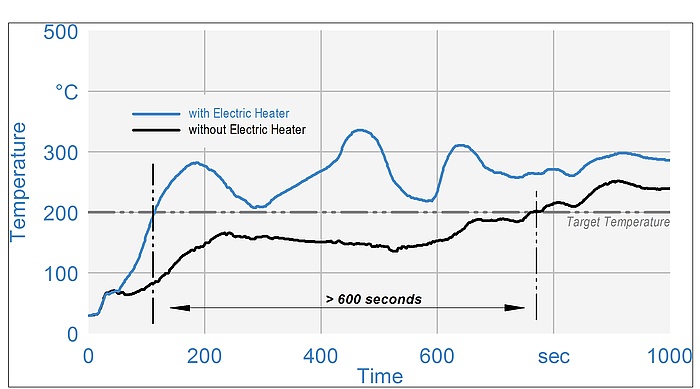 Faster catalyst light off by electrical heating.
However, the engine itself has to generate the electrical energy required for heating using the alternator. This increases the fuel consumption, but this method is still more efficient than others. With increasing fuel consumption, the emissions also increase, which is problematic only inasmuch as the catalysts are not yet warm enough. So, when using electrical heating, careful consideration has to be given to energy management to avoid a solution that backfires. In terms of light-off, it is advantageous to place a catalyst as near as possible to the engine, as the hot exhaust gases are the major heat source for warm¬up. Placing the catalyst immediately behind the engine would be an extreme solution because normally the turbocharger is positioned here. The solution is therefore called the pre¬turbine catalyst.
Figure 5 shows that a pre¬turbine¬catalyst reaches the light-off temperature after 30 seconds, while it takes more than 100 seconds for a standard catalyst to meet the threshold for the first time (using the example of the closed coupled oxidation catalyst). 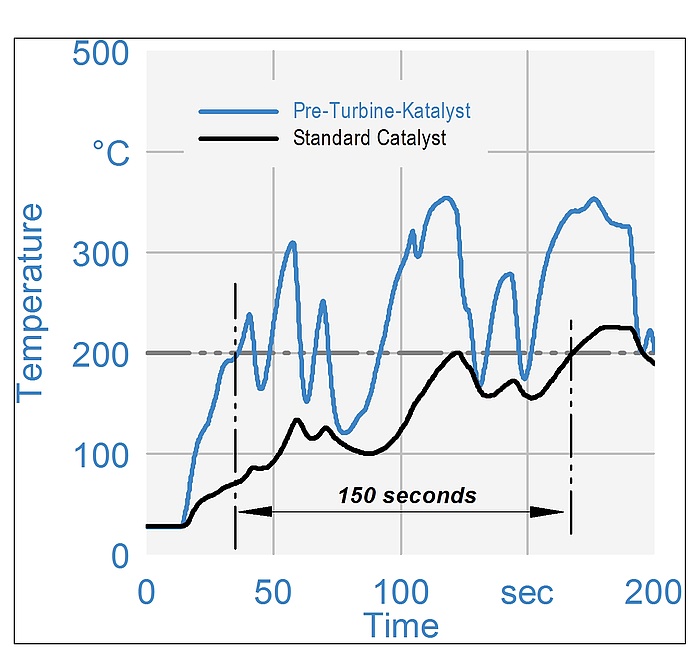 Faster light off of a pre-turbine catalyst.
The advantage of this method is that it requires no extra fuel energy. The disadvantage is that the catalyst also cools down easily during idle engine operation. Another drawback is that the catalyst consumes thermal energy that is otherwise used by the turbocharger. This increases the so called turbo-lag. Both technologies are promising and may be found in future series production vehicles. However, their strong interaction with the entire powertrain system makes research and development a difficult task.
Eberhard SCHUTTING
Institute of Internal Compustion Engines and Thermodynamics
Inffeldgasse 19/III
8010 Graz
Phone: +43 316 873 30050
schutting@ivt.tugraz.at