TU Graz researchers are getting a (nano) perspective

TU Graz operates two beamlines at the ‘Elettra Sincrotrone Trieste’ research facility in which structures and properties of materials can be investigated at the tiniest scale. 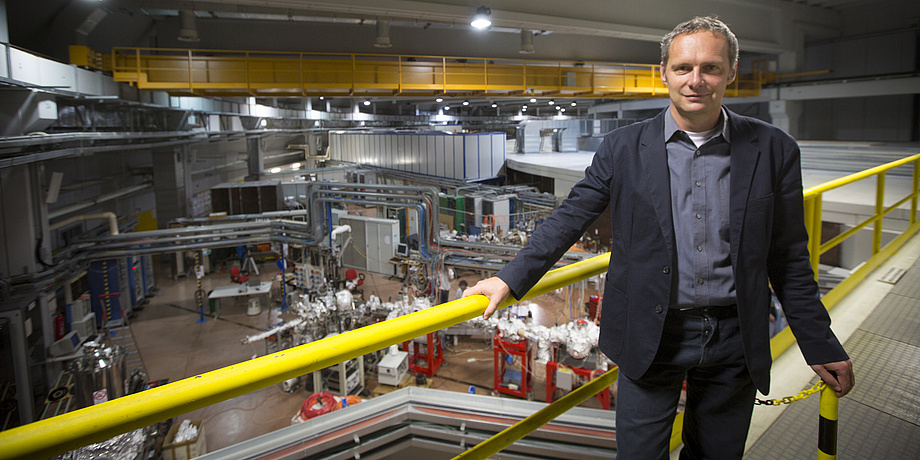 Heinz Amenitsch heads the TU Graz team in Trieste. The large storage ring and the individual beamlines are visible in the background. © Lunghammer - TU Graz

The circular route around the storage ring at the centre of the Elettra Sincrotrone Trieste research facility high in the mountains above the Italian harbour city of Trieste is 280 metres long. Here you can take your daily stroll along the 28 currently operational beamlines just as though you were on an endless running track. The walk past office containers and workplaces lasts a good ten minutes. In contrast to the unhurried pace of humans, inside the storage ring electrons manage to go round the whole circuit incessantly 1.1 million times per second. So definitely faster than you would on foot, by scooter or even by bike.

In the synchrotron – a ring-shaped particle accelerator – extremely bright light is produced with the help of which organic and inorganic materials are X-rayed and investigated. The light also serves to produce the material structures in nano-format in the first place. This research is essentially earmarked for many fields such as microelectronics, nanotechnology, medicine and environmental technology. 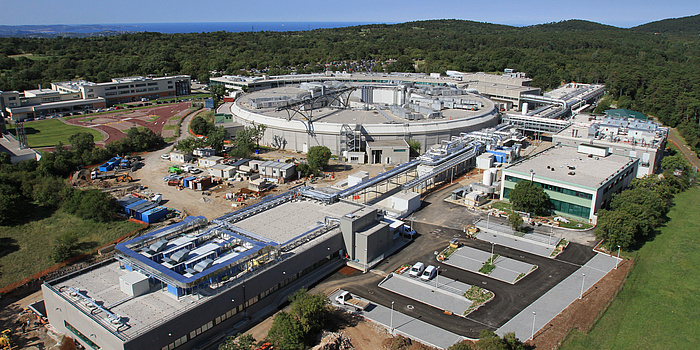 The research centre Elettra Sincrotrone Trieste is located on a hill above Trieste near Basovizza.

The intensive light is produced in several steps. First, a metallic electrode sends loaded electrons into a so-called booster – a steel tube under hyper vacuum, which is surrounded by a strong electromagnetic field. The electrons are accelerated almost to the speed of light and finally led into the large storage ring. Here, they go round in circles 1.1 million times per second.

The storage ring is not actually a ring in the true sense, but rather a sequence of straight sections and curves. Strong magnets outside the storage ring at the curved ring pieces make the electrons undulate and release surplus energy in the form of light waves. This light is many times stronger than the light sources in a traditional laboratory and allows extraordinary glimpses into the properties of materials.

The light beam is pooled at the curves of the ring and led off into the 28 beamlines at high intensity. The wavelengths can range from infrared to X-ray, depending on requirements. ‘You have to basically imagine it as a very intense laser pointer which you can use to look into matter directly. Only with the difference that you decide yourself what wavelength the light is and thus what insights are possible,’ explains Max Burian. He is part of the TU Graz team and works on the SAXS beamline – one of two beamlines operated by TU Graz. 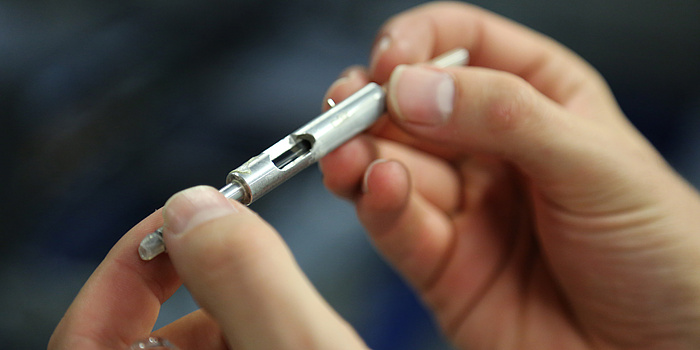 A sample of material is being prepared for experiment at the SAXS beamline at the Trieste synchrotron.

The TU Graz team looks deep into the material...

SAXS stands for ‘Small Angle X-ray Scattering’. The SAXS beamline was established by the Austrian Academy of Sciences in 1996 and has been operated by researchers from TU Graz’s Institute of Inorganic Chemistry led by Heinz Amenitsch since 2012. The team in Trieste is not conducting research alone. There are also visiting scientists who conduct special experiments.

In addition to the facility in Trieste, the Institute of Inorganic Chemistry operate several other research facilities in the laboratories in Graz where work can be carried out in a range of different fields: Elementary analysis, GC-MS, NMR, IR, UV, Raman scattering, light scattering, X-ray diffraction und lab SAXS.

In Trieste, material structures and structural changes of organic and inorganic samples in liquid, solid or gaseous form are investigated in particular. The samples are investigated by focusing a highly concentrated x-ray beam on them. Depending on the structure of the molecule, the light is scattered in different ways. A scatter diagram is created which allows inferences to be made about the sample. ‘This method is very abstract because we are not producing data in real space, but rather in mathematical space – in so-called reciprocal space. This means that we first have to interpret the data using models and then back calculate the data into real space in order to come to a meaningful result.’ explains Max Burian. ‘Our experiments often only last a few minutes. But the data analysis can take weeks.’ 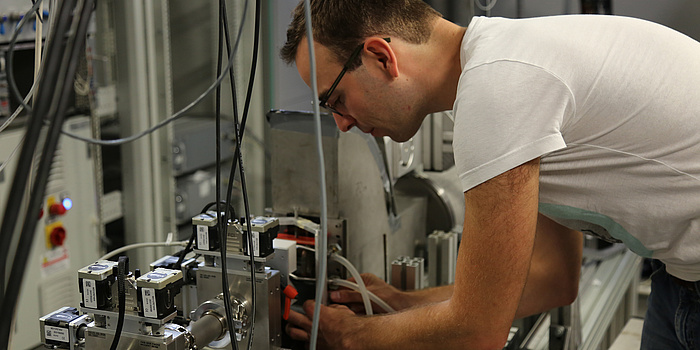 Max Burian prepares a new experiment on the beamline.

The special field of the Italian facility and the TU Graz research team is the observation of reaction processes in solutions and disordered systems. ‘Thanks to the light from the synchrotron, we are in the position to observe these comparatively fast processes in solutions and disordered systems at high time resolutions. This wouldn’t be possible with classical laboratory facilities because the light source is not intense enough,’ explained Max Burian. It works like this: when a reaction lasts for several seconds, the light beam is aimed at the sample every ten milliseconds and a total of 1000 X-ray images are taken. If you juxtapose all the images, a kind of film is made by which the reaction can be well understood.

A portrait of the researcher Max Burian can be found in the category Young talents on Planet research.

The TU Graz team has been working on refining this kind of observation for several years – successfully so, as the first experiment in November was able to prove. ‘Up to now our measurements have taken place in the millisecond range – in other words at around one thousandth of a second. With our new method, we are now in a position to work at the nano and pico-second ranges,’ enthuses Burian. This was made possible by a new X-ray detector and the addition of an ultra-fast laser. Along with the new equipment, a new method was also introduced. Whereas with normal SAXS measurements – similar to the continuous shooting mode of a camera – approximately one thousand images are taken very quickly one after the other, with the new set up a pump-and-probe measurement is made. This involves a laser transmitting an impulse just before the measurement is taken in order to initiate the reaction. Directly afterwards a single image is taken. This process is repeated on each rotation of the electrons in the storage ring 1.1 million times per second. Parallel to this, the duration between the laser impulse and capturing the image is continually increased so as to always visualise the reaction at a different point in time. This allows a much more precise film of the observed reaction to be produced.

In the future, the Graz team in Trieste wants to explore the possibilities of using laser measurements much more intensively and is planning to set up its own laser laboratory parallel to the SAXS beamline. 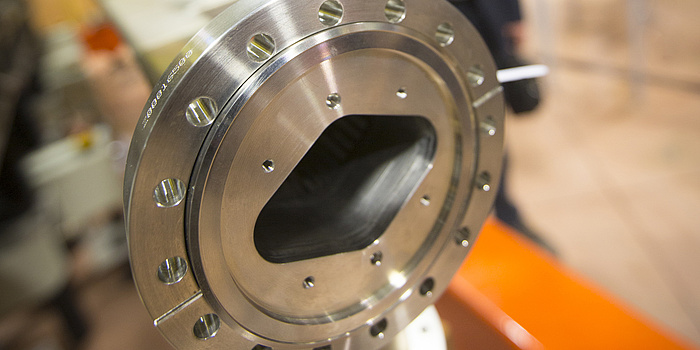 Inside the research facility: The light is cast through this tube onto the material sample.

... and builds structures on the nanoscale

The second beamline operated by TU Graz is one metre next to the SAXS beamline and works using deep X-ray lithography (DXRL). This technology allows objects made of polymers at the micro and nano scales to be constructed, such as toothed cogs in mini format, drug delivery systems, miniature needles, sensor systems and microchips.

The polymer material is bombarded in a liquid solution with high-energy X-rays through a mask and in this way deformed as required. The form produced can in turn be used as a template to produce metal parts, such as sensors or microelectronic components in miniature in mass production.

How to research at the synchrotron

Researchers at TU Graz as well as external researchers can use the two Austrian beamlines at the Trieste synchrotron and the laboratory instruments in Graz for their own research projects. Through the international research infrastructure network CERIC (Central European Research Infrastructure Consortium) www.ceric-eric.eu, interested parties can submit project applications twice per year at the consortium and make use of the Europe-wide infrastructure network of CERIC with approval. Visit the Institute of Inorganic Chemistries website or the CERIC website for more information.

Under the title Hierarchical organization of perylene bisimides and polyoxometalates for photo-assisted water oxidation, the renowned journal Nature Chemistry has just published a paper on the joint work of researchers from Graz University of Technology, Padua and Trieste on the SAXS beamline.