Eichlseder: “Hydrogen is the Key to Green Energy”

Helmut Eichlseder works on sustainable propulsion systems. One important factor is hydrogen – in pure form or as a feedstock for fuels. 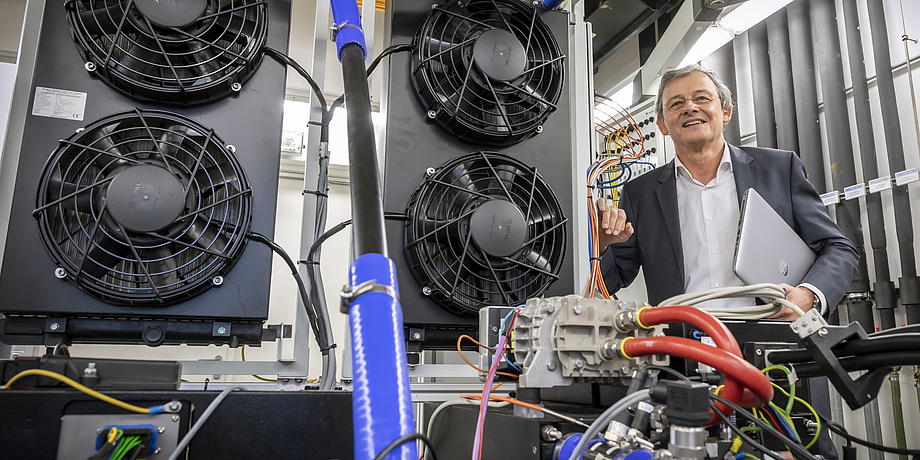 News+Stories: If your neighbour asks you whether hydrogen can already be used for driving or heating, what do you say?

Helmut Eichlseder: Heating houses is theoretically feasible, but not the most sensible way to use it. Cars can already run on hydrogen. There are vehicles – we have one ourselves as a company car at the institute – but the infrastructure is not yet sufficiently developed in Austria. There are presently five hydrogen filling stations. And vehicle prices are currently still higher than for conventional vehicles. It will play a role above all in public transport, but it will take a while before it becomes mainstream.

Can hydrogen offer solutions in the current energy shortage?

Eichlseder: In the medium term, yes, it will play a key role. We want to have sustainable energy. But Europe alone does not have the capacity to meet current demand. Therefore, we will have to import energy from countries that have much better conditions. And we have to transport and store this energy. This is exactly where hydrogen can help us, because it is a very good energy carrier. But it’s not a good primary energy, such as oil.

Europe alone does not have the capacity to meet current demand.

The production of hydrogen will therefore happen in countries that either have high solar radiation, strong wind or suitable geographical conditions for hydropower. In favourable regions, we are talking about more than double the energy yield than is possible in Europe. And it is noticeable that these efforts are becoming stronger and stronger. I myself have just been on two research trips to particularly favourable areas. Bhutan is a very small state, but because of its geography it has an enormous amount of hydropower, but it itself wouldn’t need even 20 per cent of the energy generated. At present, however, the appropriate infrastructure is lacking and the country has to buy expensive fossil energy. And I was in Saudi Arabia, where there is a lot of unused land with very strong solar radiation. The country is aware that it cannot rely on fossil fuels and is currently investing enormously in sustainable technologies. For example, there are ideas for a model city based on hydrogen.

This interview is part of the dossier "Green hydrogen - hype or hope?", in which experts from hydrogen and energy industry research at TU Graz answer the big, burning questions about the future of (green) hydrogen.

Where do we currently stand in research?

Eichlseder: Our focus in this regard at the Institute of Thermodynamics and Sustainable Propulsion Systems is on energy converters. There are fuel cells, which are seen as the main technology, but also the hydrogen combustion engine. This is just gaining momentum because the major car manufacturers have discovered it for themselves as an alternative to fuel cells. The topic of e-fuels, i.e. fuels based on hydrogen that can be used with conventional combustion engines, is also important. They play a role above all in aviation, shipping and transport. Hydrogen will thus not only be an issue in its pure form, but also as a starting product for substances, such as methanol or ammonia, which have a higher storage density and can be transported even better. Of course, the argument is true that conversion makes it less efficient than direct use, but if we want renewable energy, we have to import it and have no alternative.

For me, however, the topic of saving energy is never given the importance it deserves in discussions. It is certainly the most effective lever.

What role could hydrogen play in the energy mix in five years’ time?

Eichlseder: Quite an essential one, even if not yet a dominant one. The processes are very slow – the infrastructure in particular takes a long time to develop. In five years, there will be many demo projects and specific applications, but hydrogen will still not be the main player in overall energy consumption.

For me, however, the topic of saving energy is never given the importance it deserves in discussions. It is certainly the most effective lever.

Where does the use of hydrogen really make sense?

Eichlseder: You have to see this in a differentiated way. It is not perfect for every application. For example, in shipping I see methanol and ammonia as much more likely because they have a higher energy density. The same applies to air traffic. Classic e-mobility will also play a greater role in private transport by car. It is different for heavy transport. In heavy transport and in industry, pure hydrogen will play a very big role.

What is missing for green hydrogen to make a breakthrough?

Eichlseder: Production is an important point. It is often forgotten that hydrogen today comes largely from fossil sources, because it’s less expensive. But the goal must be to source it from sustainable sources and make it cheaper. We have to further develop electrolysers – also in terms of costs. And in our business – the development of propulsion systems – it’s not just about cost, but also about robustness. There is still a lot of work to be done. At present, fossil energy is still unrivalled, despite all the current price increases.

What are the biggest misconceptions at the moment?

Eichlseder: That hydrogen requires an extremely large amount of energy to produce. It is “only” an energy carrier and thus associated with efficiencies. Of course, it requires energy to produce and doesn’t just bubble up out of the ground like crude oil.

What do you find so persuasive about hydrogen?

Eichlseder: Its universal applicability – both in direct form, but also as a feedstock for other fuels. That’s why I’m convinced it will be the key to a renewable energy economy. TU Graz has a very positive attitude towards this topic and promotes research in this area.