State-of-the-art platinum catalysts are combined with other transition metals in order to decrease material costs. This approach enhances the catalytic activity and thus increases the output of electrical energy based on the amount of platinum used.

Limited availability of fossil fuels and binding environmental requirements for the reduction of pollutants and greenhouse gases are key issues in today´s energy supplying industries. To ensure a continuous power supply in the future, it is necessary to increase the efficiency of energy conversion, distribution and usage. The polymer electrolyte fuel cell enables the emission-free, efficient and sustainable production of electrical power for mobile, portable and stationary applications. For the widespread uptake of fuel cell technology and the conservation of resources at the same time, major efforts are devoted to the development of novel and cost-efficient catalyst systems.

Fuel cells are galvanic cells and in their principle comparable to batteries: two electrodes (anode, cathode) are separated by an electrolyte. The electrolyte conducts ions but is an electric insulator. Within a polymer electrolyte fuel cell, the fuel e.g. hydrogen (H2) is supplied to the cell on the anode, where it forms oxonium cations (H3O+, usually denoted as H+) and electrons in the catalyst layer. The electrons are transported through an external circuit and utilized to power an external load. The oxonium ions migrate through the electrolyte and react at the cathode with electrons from the external circuit and oxygen (O2) from ambient air. The only reaction product is water (H2O).

The principle of the polymer electrolyte fuel cell.

At the anode, hydrogen is oxidized at very high rates when state-of-the-art platinum-based nanoparticle catalysts are used. However, at the cathode, the slow reaction kinetics of the oxygen reduction limits the power density of fuel cells and their conversion efficiency. Thus, currently up to 10-fold higher platinum loadings are used on he cathode in order to enable a reasonable performance, leaving the cathode catalyst to be the dominant factor to determine the costs of polymer-electrolyte fuel cell systems.

For the development of novel fuel-cell catalyst systems, it is necessary to consider the abundance of possible materials as well as their activity and stability under the corrosive and oxidizing environment of the fuel-cell cathode. The identification of eligible materials demands an understanding of the structure of nanoparticle catalysts nd of all fundamental processes, which occur on their surfaces during oxygen reduction. Furthermore, the facile scale-up for producing innovative fuel cell catalyst systems is anticipated, thus requiring a broad knowledge of manufacturing methods.

The range of possible materials is limited. Apart from platinum, only gold and iridium are thermodynamically stable in their bulk form at potentials greater than 0.9 V. Therefore, many research activities are focused on enhancing the activity of platinum towards oxygen reduction. Studies showed that a 2- to 4-fold increase in mass activity, i.e. the catalytic activity based on the amount of platinum used, would be sufficient to make the fuel cell economically viable. However, a higher worldwide consumption of latinum due to increasing fuel-cell production will affect the price of platinum. Today’s assumptions suggest that ultimately a 4- to 10-fold increase in mass activity will be necessary to enable the widespread commercial success of fuel cell technology.

The targeted enhancement of the oxygen-reduction mass activity is achieved by synthesizing catalysts with so-called core-shell nanostructures. Typically, the shell is a platinum layer on the surface of platinum alloyed with a less noble 3d metal, such as iron, cobalt, nickel or copper. The platinum shell protects the alloys kinetically against the dissolution of the less noble metal components. The alloy core alters the electronic properties of the shell, resulting in an enhanced oxygen reduction activity of the alloycatalysts in comparison to pure platinum. Before introducing these new catalysts in a real application, they are characterized ex situ, i.e. outside of the fuel cell, in half-cell measurements, only investigating the cathode. For this, a few micrograms of the synthesized catalysts are deployed on rotating disk electrodes and subjected to activity and stability testing. After confirming the required properties, the catalysts are implemented in gas-diffusion electrodes and tested in fuel-cell set-ups.

Electrodes containing the catalyst systems developed by the team of the Fuel Cell Systems Laboratory were successfully used in fuel-cell stacks of industrial partners. Through this, a reduction of the platinum loading by 20% in comparison to state-of-theart fuel cell electrodes was achieved, while maintaining high performance and durability at the same time. 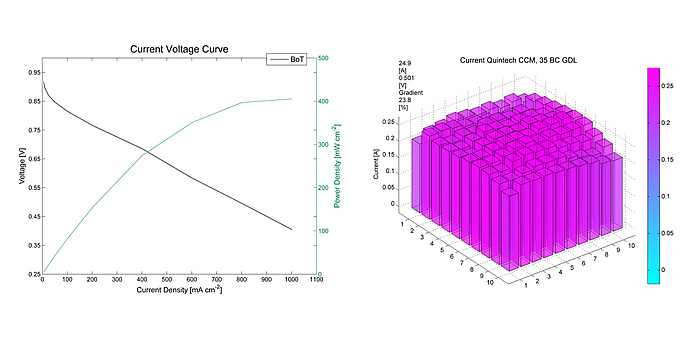 The current-voltage characteristics of a polymer electrolyte fuel cell and the corresponding spatial current distribution at a current density of 1 A cm-2.

Aside from catalyst development, the Fuel Cell Systems Group of Viktor Hacker investigates influences on the lifetime of polymer-electrolyte fuel cells (SecondAct, FC-Diamond, PEMREX S), the utilization of liquid fuels (e!polycat, H2-Speicher) as well as the production and purification of hydrogen (HyStorm, Mestrex, OSOD), based on a recently patented proce

Alexander Schenk is post-doctoral researcher and member of the Fuel Cell Systems Laboratory at the Institute of Chemical Engineering and Environmental Technology. Since 2015, he has directed the FFG-funded project MEA Power to reduce the platinum loading in fuel-cell based combined heat and power production.