Nikolaus Schwaiger co-developed the BioCRACK process. High-grade and eco-friendly diesel fuel is produced from biomass such as wooden waste, straw and reeds. 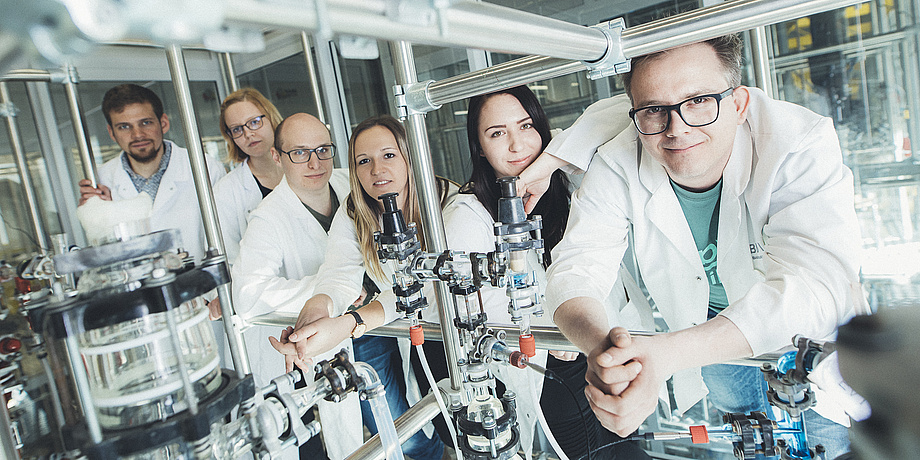 Nikolaus Schwaiger (right) with his research team at the Institute of Chemical Engineering and Environmental Technology at TU Graz. © Marija Kanizaj
The findings are impressive. “In comparison with fossil fuels, the fuel generated in the bioCRACK plant saves 85 per cent of greenhouse gases,” explains chemical engineer Nikolaus Schwaiger. The bioCRACK process developed by the Institute of Chemical Engineering and Environmental Technology, together with the Styrian biogas and biodiesel plant builder BDI BioEnergy International AG, produces hydrocarbons from lignocellulose, the main constituent of plants, directly and more simply than any other biomass-to-liquid strategy.

Nikolaus Schwaiger has been involved in the development of the process since the beginning: from small-scale experiments, one of which was his doctoral thesis, to the OMV pilot plant in Schwechat, which tested the innovative biogenous diesel production at a large scale.

The research group led by Nikolaus Schwaiger at TU Graz is the only one in Austria working on the direct biomass-to-liquid generation of second-generation biofuels – in other words, into biofuels which are not produced from food plants, such as palm oil or rapeseed oil. The process is an important contribution towards climate-friendly transportation and compliance with the EU regulation which stipulates that by 2020, 10 per cent of the energy used in transport in Europe has to come from renewable sources. On top of this, it would lower Austria’s dependence on crude oil imports. The value added from the production of biogenic fuels will remain in Austria and not be handed over to the oil-exporting countries.

Biofuels are obtained by using the infrastructure already available in the oil industry. “Simply put: in the bioCRACK process solid, oxygen-rich, non-edible biomass – for instance wooden waste, wheat straw or reeds – is heated in a liquid heat carrier without oxygen and broken down,” says Nikolaus Schwaiger. The liquid heat carrier is vacuum gas oil, an intermediate product of mineral oil refining. The vacuum gas oil and biomass are “cracked” at temperatures between 350 and 400 degrees Celsius – in other words, the macromolecules are broken down into smaller fragments. First and foremost, bioCRACK oil is produced from cracked vacuum gas oil and decomposition products of biomass. From this, a fuel of which 10 per cent has been biogenically produced can be obtained and directly further processed in a refinery. 15 per cent of the biogenic carbon dissolves in the non-cracked carrier oil. This can be upgraded into fuel in the refinery in a further process step.

Carbon balance at 375 degrees Celsius, spruce wood.
Furthermore, liquid-phase pyrolysis oil is produced in the bioCRACK process – a mixture of oxygen-rich, water-soluble compounds of biomass and reaction water. These liquid components must be freed of oxygen and hydrogen (hydrodeoxygenation) in order to be utilisable as fuel. “Currently we can transform about 23 per cent of the used biomass into fuel,” explains Nikolaus Schwaiger. “Our aim now is to produce a fuel with up to a 100 per cent biogenic carbon share on an industrial scale by means of hydrodeoxygenation of the liquid-phase pyrolysis oil.” The researchers at TU Graz have already been able to achieve this on a small scale. They want to make this technology practicable in the current FFG-funded bioBOOSt plus project.

This research area is anchored in the Field of Expertise “Mobility & Production”, one of five research foci of TU Graz.

Nikolaus Schwaiger studied technical chemistry, was awarded his doctorate in chemical and process engineering, and habilitated in environmental technology at TU Graz in 2017. He is employed at BDI – BioEnergy International AG, and has been connected to them since his diploma thesis. He is an adjunct professor at TU Graz with his own research group. In 2017 his research project at TU Graz won a recognition award in the context of the HOUSKA Prize 2017.
Nikolaus SCHWAIGER
Priv.-Doz. Dipl.-Ing. Dr.techn.
Institute of Chemical Engineering and Environmental Technology
Inffeldgasse 25/C
8010 Graz, Austria
Phone: +43 316 873 7965
nikolaus.schwaiger@tugraz.at
www.ceet.tugraz.at