The China Seismo-Electromagnetic satellite will be launched into near-Earth space in the early hours of 2nd February 2018. The Austrian Academy of Sciences (ÖAW) and TU Graz are contributing a scalar magnetometer. 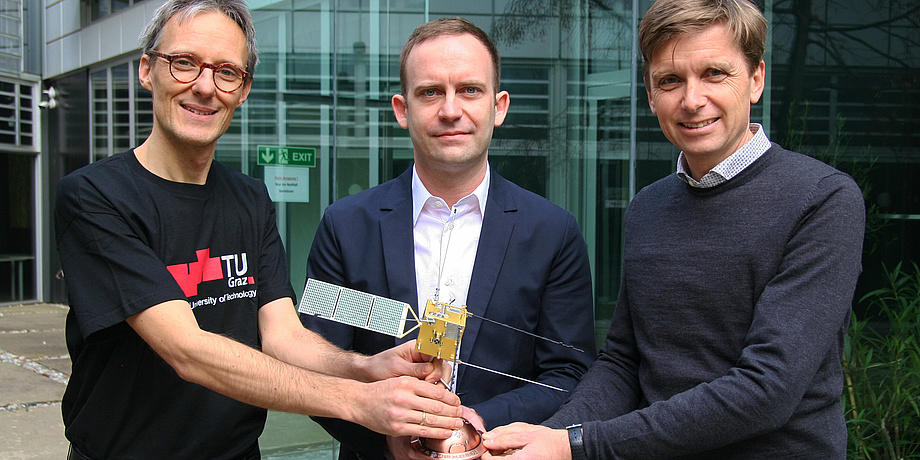 Roland Lammegger from TU Graz and Andreas Pollinger as well as Werner Magnes from the IWF (from left to right) represent the Graz CDSM team in China. © IMF/ÖAW - Valavanoglou

CSES (China Seismo-Electromagnetic Satellite) is a Chinese satellite designed to investigate electromagnetic phenomena connected with seismic activity on Earth. The satellite will be launched from the Jiuquan Satellite Launch Center in the Gobi desert and placed in a sun-synchronous circular polar orbit at an altitude of about 500 km.

The instrument for measuring magnetic fields in a bandwidth between DC and approx. 60 Hz consists of three sensors and was built in a cooperation project between the National Space Science Center (NSSC) of the Chinese Academy of Sciences, the Space Research Institute of the Austrian Academy of Sciences (IWF) and the Institute of Experimental Physics at TU Graz. Although the NSSC is responsible for the two fluxgate magnetometers, the IWF together with TU Graz have developed a completely novel scalar magnetometer (CDSM). “Using this new technology, we can improve the accuracy of magnetic field measurements by a factor of ten,” explains Werner Magnes, head of the Magnetometer Group and Deputy Director of the IWF.

Maiden flight of a magnetometer

Together with Andreas Pollinger and Roland Lammegger from TU Graz, Magnes will follow the launch live on-location and put the Graz magnetometer into operation. The CDSM will experience its maiden flight on board the CSES, during which the instrument will be technically and scientifically tested for space-worthiness, so that it can also be used in long-term missions. The researchers want to deploy their new development in the outer solar system in the near future. In 2022 the CDSM will accompany the ESA space probe JUICE on its journey to Jupiter, and in 2030 will carry out detailed observations of the biggest planet of our solar system and its moons for three years. “By measuring the magnetic field we will be able to proverbially look into the icy moons of the giant gas planet and carry out research on the deep oceans of these potential areas of life,” says Lammegger. Work on this new technology is supported by the FFG and ESA.