“Climate research” with a difference

As regards pioneering vehicle technologies, the focus is on more energy-efficient air-conditioning systems. New developments can be tested in the climatic chambers of the Institute of Thermal Engineering.

System test rig for the “GreenHVAC4Rail” project at the Institute of Thermal Engineering of TU Graz. © VIRTUAL VEHICLE Research Center
No traveller wants to be without a well air-conditioned train compartment. But did you know that up to 20 per cent of the total energy consumption of a train is expended on heating and air conditioning? “This area has enormous savings potential,” explains René Rieberer at TU Graz’s Institute of Thermal Engineering, which is already conducting research on concrete solutions: “Currently, direct electric heating systems are primarily used in trains, in other words – resistance heating. In the near future, these could be replaced by cooling systems using heat pump function which are not only more energy efficient, but also more eco-friendly,” says René Rieberer.

The cooling system of an air conditioner works like a refrigerator. A coolant in the evaporator first absorbs heat – for instance from the passenger compartment of a train, the interior of a passenger car or from a building – by evaporation, thus bringing about cooling. Then it is compressed again in the cycle, thus raising the temperature. The heat obtained from cooling is released outwardly together with the operating energy of the compressor as waste heat. In principle this works in the same way as a heat pump, but the other way round. Heat is taken up from the environment and subsequently together with the operating energy of the compressor given off as useful heat, for instance, in a compartment or in the heating cycle of a building. The thus achievable efficiency is much higher than with direct electrical heat supply.

In the “GreenHVAC4Rail” FFG project, TU Graz and VIRTUAL VEHICLE Research Center (ViF) researchers together with corporate partners Obrist Engineering, Liebherr-Transportation Systems and Rupert Fertinger have developed a cooling and heating air-conditioning system specially for railed vehicles which works using the eco-friendly coolant CO2. In comparison to the currently used hydrofluorocarbons (HFCs), CO2 has a negligible greenhouse-gas potential. “A huge challenge in the project,” says Alois Steiner, project leader at VIRTUAL VEHICLE Research Center in Graz, “was to find a way of switching between three operating modes: cooling, heating and thawing operation of the external heat exchanger – which is necessary in winter due to the formation of ice – which is installed on the roof and has to withstand all weather conditions.”

System test rig at the Institute of Thermal Engineering

To test the efficiency and functioning of the cooling and heating performance of the eco-friendly prototype system, the researchers set up a system test rig in one of the climatic chambers at TU Graz. “The test programme comprised tests at ambient temperatures of -10 degrees Celsius to +50 degrees Celsius. Measuring results have shown that the heat pump can save up to 40 per cent electricity compared to purely electrical heating systems in the cold season,” says René Rieberer.

More detailed information about the FFG-funded “GreenHVAC4Rail” project can be found in the VIRTUAL VEHICLE magazine No. 23 on page 14. To improve the project results and make the components compatible for a series launch, the “ECO2JET” project was launched in early 2017. 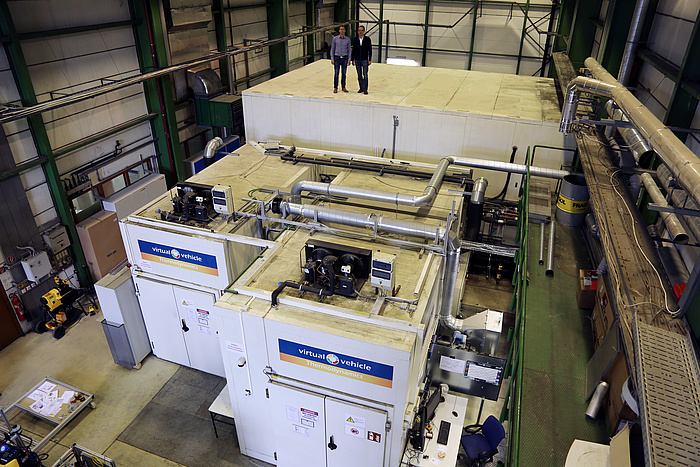 The three climatic chambers of TU Graz’s Institute of Thermal Engineering. The two smaller climatic chambers (owner: VIRTUAL VEHICLE Research Center, ViF) are in use for passenger vehicle applications. In the background (from left to right) Alois Steiner (ViF) and René Rieberer stand on the roof of the large climatic chamber in which the system test rig for “GreenHVAC4Rail” was accommodated and which is also used for stationary applications – e.g. for measuring supermarket cooling appliances and heat pumps.

The “GreenHVAC4Rail” project partners have already gathered experience of CO2 air-conditioning systems with heat pump function in another project. In 2013 a prototype of a CO2 air-conditioning system with heat pump function was developed for hybrid and electric cars. The efficiency of the air-conditioning system plays a much more important role in these kinds of drive systems than with petrol engines. This is because the waste heat produced by the combustion engine which is used for heating is not produced by electric or hybrid cars. For this reason the interior is usually heated using direct heating, thus making demands on the vehicle’s battery and drastically reducing its range.

The aim of the project was to design a heat pump system which is as efficient as possible. At the same time, the aim was to minimise the build-up of ice, which occurs on the external heat exchanger and which restricts the performance of the heat pump. To optimise the heat pump system with the de-icing system, measurements were carried out on the prototype of a CO2 air-conditioning system with heat pump function at the Institute of Thermal Engineering. The researchers were able to show that the annual total energy consumption can be reduced by up to 40 per cent using the new heat pump system. 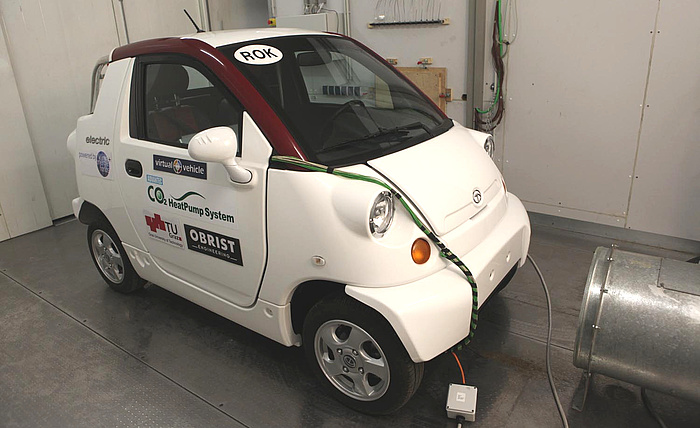 Measurements were carried out on the prototype of a CO2 air-conditioning system in an electric vehicle in the large climatic chamber of TU Graz’s Institute of Thermal Engineering to optimise the complete cycle (recognition of ice – switching to de-icing operation – switching back to heat pump operation after completed de-icing.