TU Graz researchers develop new brain-computer interface application which allows music to be composed by the power of thought. How this works is shown in the current issue of the journal PLOS ONE. 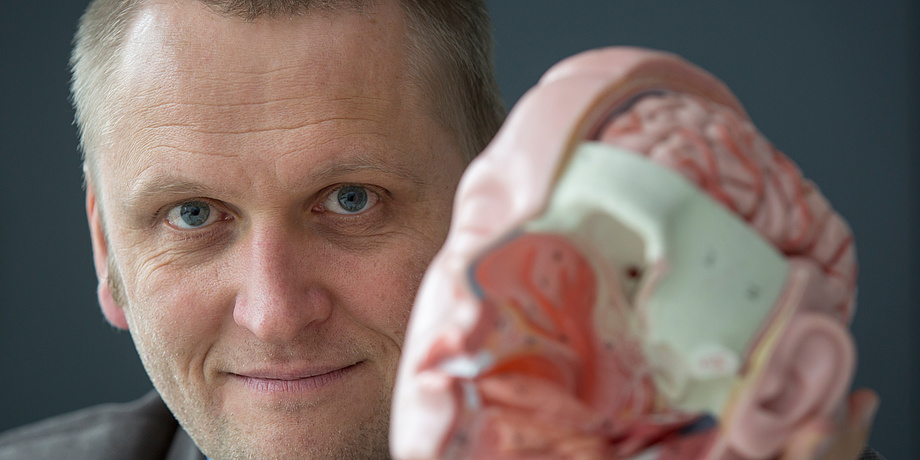 Brain-computer interfaces, known as BCI, can replace bodily functions to a certain degree. Thanks to BCI, physically impaired persons can control special prostheses through the power of their minds, surf in internet and write emails.

Under the title of “Brain Composer”, a group led by BCI expert Gernot Müller-Putz from TU Graz’s Institute of Neural Engineering shows that experiences of quite a different tone can be sounded from the keys of brain-computer interfaces. Derived from an established BCI method which mainly serves to spell – more accurately – write by means of BCI, the team has developed a new application by which music can be composed and transferred onto a musical score – just through the power of thought. All you need is a special cap which measures brain waves, the adapted BCI, a software for composing music, and of course a bit of musical knowledge.

The basic principle of the BCI method used, which is called P300, can be briefly described: various options, such as letters or notes, pauses, chords, etc. flash by one after the other in a table. If you’re trained and can focus on the desired option while it lights up, you cause a minute change in your brain waves. The BCI recognises this change and draws conclusions about the chosen option.

18 test persons chosen for the study by Gernot Müller-Putz, Andreas Pinegger and Selina C. Wriessnegger from TU Graz’s Institute of Neural Engineering as well as Hannah Hiebel, meanwhile at the Institute of Cognitive Psychology & Neuroscience at the University of Graz, had to “think” melodies onto a musical score. All test subjects were of sound bodily health during the study and had a certain degree of basic musical and compositional knowledge since they all played musical instruments to some degree. Among the test persons was the late Graz composer and clarinettist, Franz Cibulka. “The results of the BCI compositions can really be heard. And what is more important: the test persons enjoyed it. After a short training session, all of them could start composing and seeing their melodies on the score and then play them. The very positive results of the study with bodily healthy test persons are the first step in a possible expansion of the BCI composition to patients,” stresses Müller-Putz.

This little-noticed sideshow of the lively BCI research at TU Graz, with its distinct focus on disabled persons, shows us which other avenues may yet be worth exploring. Meanwhile there are some initial attempts at BCI systems on smart phones. This makes it easier for people to use BCI applications, since the smart phone as powerful computer is becoming part of the BCI system. It is thus conceivable, for instance, to have BCI apps which can analyse brain signals for various applications. “20 years ago, the idea of composing a piece of music using the power of the mind was unimaginable. Now we can do it, and at the same time have tens of new, different ideas which are in part, once again, a long way from becoming reality. We still need a bit more time before it is mature enough for daily applications. The BCI community is working in many directions at high pressure.

Graz as centre of BCI research

The international community for brain-computer interfaces is meeting at the Graz BCI Conference 2017 from 18th to 22nd September. It will end with a special event open to the public: a  BCI Science Slam on Friday, 22nd September. Five researchers will stage their current topics using “mini-shows” lasting six minutes in a creative and easy-to-understand way, and the audience will vote for the winner of the Slam at the end. Entry is free of charge. You can find  information about the conference and the Science Slam here.

This work is anchored in the Field of Expertise “Information, Communication and Computing”, one of five research foci of TU Graz. The research leading to these results has received funding from the European Union Seventh Framework Programme FP7/2007-2013 under grant agreement n°  28-8566 FP7-ICT-2011-7.