After only a few months at Graz University of Technology, Birgitta Schultze-Bernhardt has already brought two renowned research grants to Graz: an ERC Starting Grant and the FWF START Prize. 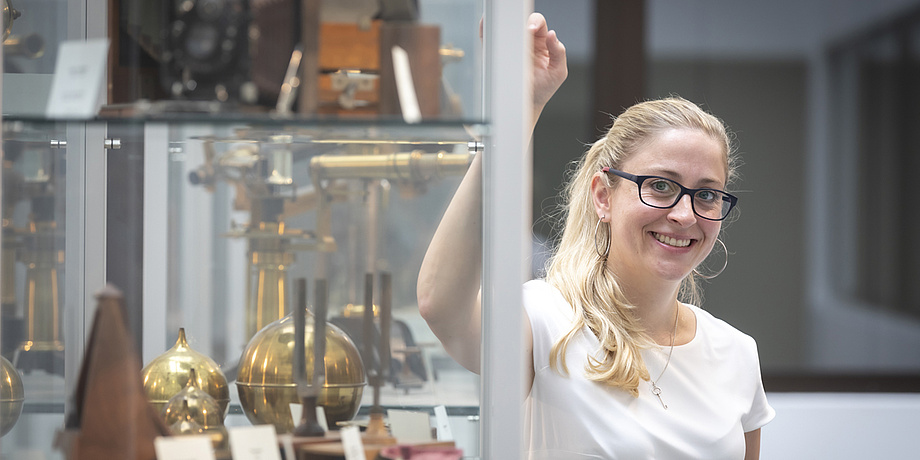 The sky in front of the wall-sized window is the colour of fresh concrete. Today, sunrays find no gap in the cloud cover. It is more pleasant inside, in Birgitta Schultze-Bernhardt’s office. There is water from coffee cups and warm ceiling light. The fact that the cloudy sky swallows the ultraviolet sunrays does not bother the physicist. After all, in future she wants to make her own UV rays.

UV radiation is very high-energy radiation. When it encounters matter or gases, the interactions are very frequent and very strong and, because it is also emitted by the sun, this makes it particularly relevant for research. Yet it is also difficult because there is currently no laser source that can emit such high-energy light directly. “I was already working on creating a frequency comb for the UV range during my doctorate,” says the researcher. “A frequency comb is a laser ruler, so to speak, by which I can measure radiation with great precision and broad band,” explains Schultze-Bernhardt. For her research she uses a method of converting infrared light into UV light – an unfortunately very inefficient method: a lot of laser power is lost, so it has to be started at a very high level in the first place.

In two projects, rooted like a tree in the same thematic ground and branching upwards, she wants to create a new approach to UV spectroscopy. The Electronic Fingerprint Spectroscopy (ELFIS) project was awarded the FWF’s START prize in spring and focuses on the lower UV range. In the summer, the researcher was awarded an ERC Starting Grant from the European Research Council, which now allows her to devote additional attention to the high-energy UV range. “With these funds I can establish a special laser source and two high-power amplifiers in Graz,” she says, looking forward to the years of research ahead of her.

The results of her work are intended, on the one hand, to improve precision spectroscopy and, on the other, to be used in applied research, for example in atmospheric research: “We could use them to investigate how the sun’s UV light affects the gases in the Earth’s atmosphere and thus, for example, find out the exact conditions under which these gas molecules react to form new molecules or simply decompose,” she explains, adding, “We physicists always want to know everything down to the last detail.”

Rainbows in the Bedroom

And this is what the now 39-year-old has wanted since her childhood days. Light has fascinated the researcher ever since the framed picture of her grandparents first threw a rainbow onto the ceiling of her bedroom. “I used to arrange the photo so that the rainbow looked particularly beautiful,” she says. “I was fascinated by simple things like a rainbow, a convex mirror in a driveway or the upside-down reflection in a spoon.” She was already enthusiastic about mathematics when she went to school, and a little later physics was added, too – “because this subject is closer to reality for me.” During her studies, she then decided to study physics, and while working on her diploma thesis with Nobel Prize winner Theodor Hänsch at the Max Planck Institute for Quantum Optics, she began working with frequency combs.

“Many have turned their Backs on Science”

“There were only a few women in this course of study. But what did bother me was that during my doctorate, the number of women around me dwindled,” says the mother of two. “Many turned their backs on science because they thought that family and science could not be combined. Whenever possible, she wants to give young women researchers confidence: “Solutions are often found more easily than you think. In my case, it was possible because I combined a passion for my job and my family. A lot has happened in recent years and childcare is now even offered at some conferences.”