Knowing decisions before they are taken? Preventing stress before it occurs? Interesting new applications in the field of neuro-information systems are explored at TU Graz. 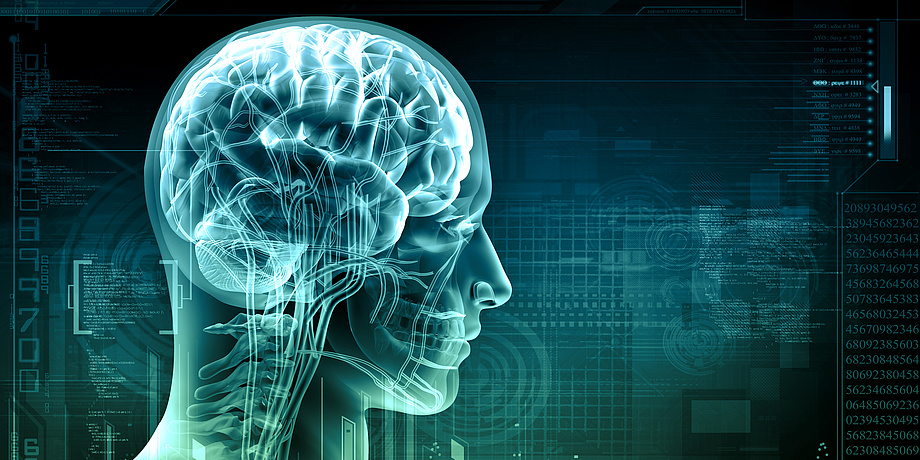 New applications for Brain-Computer Interfaces.
Neuro-information systems (NeuroIS) investigates the neuro-physiological foundations related to the design, use and impact of information and communication technology (ICT). A major advantage of NeuroIS research is its ability to examine human behaviour at the underlying neuro-physiological level reducing self-reporting biases in survey research. It specifically deals with designing and deploying IT tools, technology adoption and use, human-computer-interaction and decision-making. For this purpose EEG-based BCI technology is a very promising tool since it enables the use of brain signals related to human behaviour without relying on indirect measures based on observation or other physiological signals. A research focus at the Institute of Neural Engineering is dedicated to the applicability of brain-computer interfaces and especially constructs of NeuroIS research, such as (un)conscious decision-making and technostress.

A brain-computer interface (BCI) translates physiological brain signals into an output that reflects the user’s intent, providing users with a new, non-muscular channel for communication and control. In the last ten years BCI technology has become more interesting for a broader community of researchers, especially the passive BCIs. A passive BCI is a system that derives its outputs from arbitrary brain activity arising without the purpose of voluntary control, for enriching a human–machine interaction with implicit information on the actual user state. Additionally, in recent years marketing researchers have also been interested in using brain imaging tools instead of simply asking persons about their preferences. This arises from the assumption that people often cannot fully explain their preference when explicitly asked, and for this reason neuroimaging tools are used to assess information about the consumer’s brain. EEG in particular may provide hidden information about the consumer experience and decision-making which is mediated by thought processes that occur “below the surface”. From several neuroscience studies we know that like/dislike decisions are made seconds before we are really aware of them. That is, milliseconds before we make a conscious choice about a product, we have already made it unconsciously. 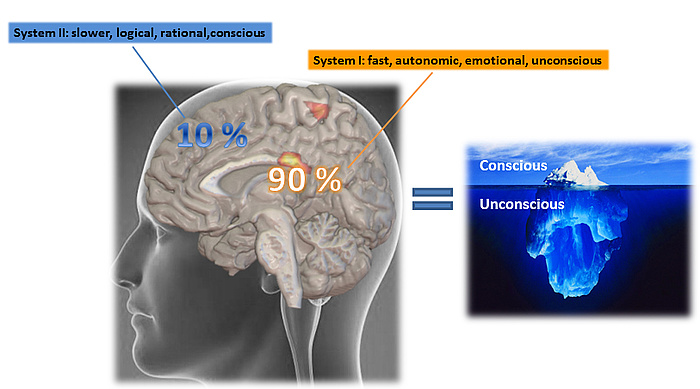 Decision making systems and the Iceberg Concept.
In our studies we investigated the decisions of people regarding the design of different cars . A sample of different cars was presented for just 100 ms on a computer screen. The task of the participants was to carefully watch them and count silently whenever their previously selected favourite car was presented. After pre-processing and analysis of the data we were able to isolate a specific waveform in the EEG which only reflects the neural response to the favourite car. That is, without asking the participants about their favourite choice we already know it milliseconds after its presentation just by analysing their brain activity. This application could be very interesting in the field of neuromarketing identifying consumer´s unconscious needs and could thus create more attractive packaging, pricing decisions and product designs. 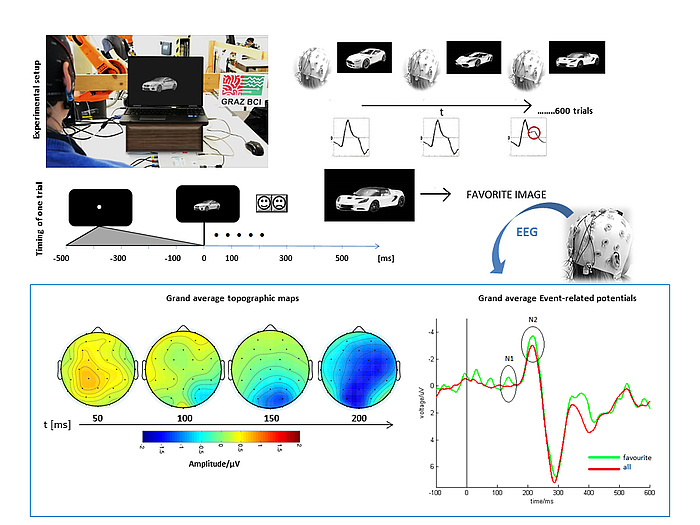 Another novel application of BCI technology is related to “technostress”. Technostress is a phenomenon that can for example arise from direct human interaction with malfunctioning information and communication technology (ICT). Most of the studies investigating the effects of technostress have used biological measures namely electromyogram (EMG), heart rate variability (HRV) and electrodermal activity (EDA). In a future project of our lab we will additionally use electroencephalography (EEG) and functional magnetic resonance imaging (fMRI) to investigate the neural correlates of technostress. We will develop an online EEG-based BCI system which will be applied to reduce technostress. The BCI system continuously records the user’s EEG and if the stress level of the person is high, the system detects this and starts with a certain coping strategy (e.g. favourite music, mental imagery). The reduction of stress by self-regulating mechanisms due to neurofeedback may increase human wellbeing in working situations. Statistics on work stress show that the costs to the health care system are immense and that “work-related stress” is among the most commonly reported causes of illness by workers. Against this background, it is essential that future studies seek to specify the costs and underlying cortical mechanisms of technostress to find solutions to cope with it. 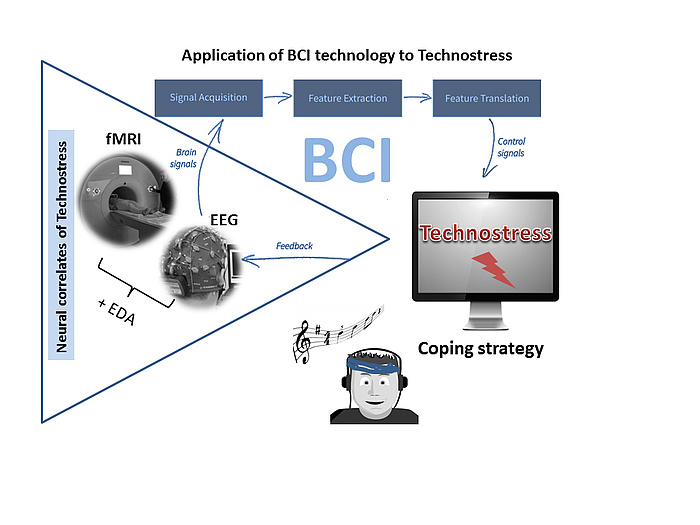