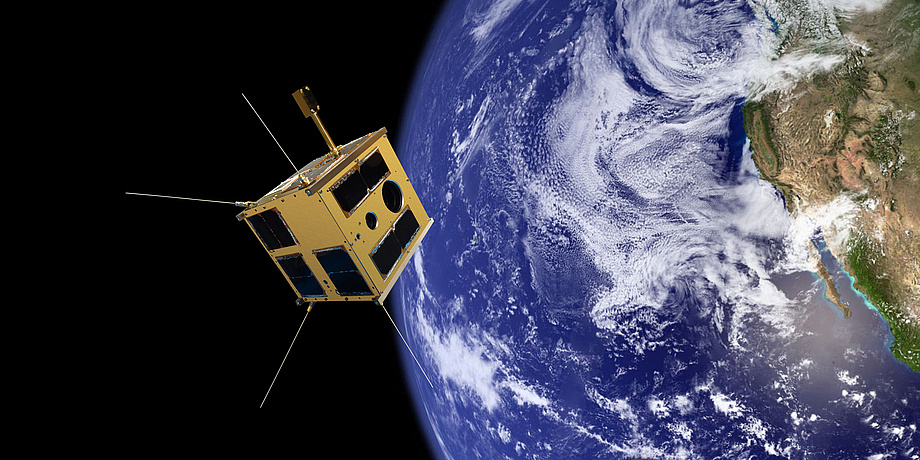 As part of the international BRITE Mission the two Austrian satellite shave been transmitting valuable data on very bright stars for three years. In the picture: TUGSAT-1, built and testet at TU Graz. © TU Graz

Photographic material available for download at the end of the text..

“BRITE stands for BRIght Target Explorer. These cube-shaped nanosatellites are 20 cm long and 8 kg heavy and carry small space telescopes,” explains Werner W. Weiss, UniBRITE project leader from the Institute of Astronomy at the University of Vienna. In the meantime a total of five nanosats are orbiting the Earth at the height of about 800 kilometres. Apart from the two Austrian satellites UniBRITE for the University of Vienna and TUGSAT-1/BRITE-Austria for TU Graz, there are also two Polish satellites and a Canadian one. BRITE Constellation has developed into an international showcase project because they are the first nanosatellites to be involved in an astrophysical research mission. All observations are dealt with in the international team.

The project has the aim of measuring the brightness variability of stars in two colour ranges – red and blue – continually over a long period of time with great precision. From this scientific data, astronomers can infer important conclusions about the physical characteristics of these stars which are important for their development. “These measurements can only be taken from space since their photometric precision is severely limited by the turbulence of the Earth’s atmosphere even when the sky is clear,” says Weiss. Furthermore, extremely disturbing interruptions due to the day-night rhythm or bad weather during observations no longer apply. Also, the observational periods of whole nights which are restricted to two months a year due to the Earth’s seasons are extended through BRITE up to six months.

The BRITE data records are indispensable for the examination of the structure of stars and their development using the methods of asteroseismology. These are based on the fact that stars vibrate, something which is provable through the slight changes in brightness. An “X-ray picture” of a star can be developed from its various pulsations, so to speak. Target areas of the first measurements included the Circinus and Centaurus constellations in the southern sky. This region of the sky is especially interesting for astronomers regarding the origin and development of stars because it contains many massive stars. Though such stars lead only a short life, they are responsible for the production of chemical elements which are also necessary for our lives.

One of the research objects of the nanosatellite was α Circini. This is a so-called “chemically peculiar magnetic star” in which the strength of the magnetic field, which is always present in stars, is sufficiently big for a detailed spectroscopic, interferometric and polarimetric investigation. What’s more, α Circini pulsates, and for this reason the interior of this star can also be examined. BRITE Constellation was able to observe the light change in two colours due to rotation, and also clear up the question of an unobserved pulsation period in the past.

Another star is β Centauri. This is a complex structure of a massive binary star which is orbited by a third more distant star. A binary star is significant for astronomers in that the stellar masses can be very well estimated using the laws of classical mechanics. The internal structure of these objects can be determined by their pulsation characteristics and tested with great accuracy. The BRITE Constellation astronomers observed β Centauri for 146 days. The challenge was to allocate the recorded 17 pulsation frequencies to one of the two binary star components and to determine their vibration pattern individually. The task was made even more difficult by the fact that both stars rotate on their axis in only a few days, something that influenced the pulsation characteristics.

Without the long, precise and uninterrupted data records of BRITE Constellation, it would not have been possible to model this massive, pulsating binary star. This modelling now serves as a prototype of the class of massive, so-called B-type stars, according to Andrzej Pigulski from the University of Wroclaw, also a member of the BRITE Constellation team.

In the case of the η and μ Centauri stars, the first data from BRITE Constellation has been able to explain the interactions between the pulsation of massive stars and their immediate vicinity. A research team at the European Southern Observatory headed by Dietrich Baade was able to separate the stellar pulsations from the circumstellar hydrodynamic processes in the variability of these two stars.

“With BRITE Constellation, Austrian astronomers and technologists have achieved a milestone in the use of nanosatellites in astrophysical research,” sums up Werner Weiss. For Austria the collaboration between the universities in Vienna and Innsbruck and Graz University of Technology is exemplary. The management of the whole BRITE Constellation project and the astrophysical research is carried out at the University of Vienna in cooperation with the University of Innsbruck. The satellite TUGSAT-1/BRITE-Austria, implemented by TU Graz, is operated from a specially developed ground station in Graz which will also take over the operation of UniBRITE.

“The two Austrian satellites were originally designed for a two-year mission. Meanwhile they’ve been in orbit successfully for more than three years. The analysis of the measurements show that the BRITE satellites can remain operational for a further two years,” says Otto Koudelka, project leader of BRITE-AUSTRIA at TU Graz. Without funding from the University of Vienna (UniBRITE) and the Austrian Research Promotion Agency (BRITE-Austria), the great success achieved by BRITE Constellation would not have been possible, nor would the work of both satellites have been embedded in a broad international cooperation.

Link to the publication on α Circini

Link to the publication on β Centauri

Link to the publication on η and μ Centauri

Link to further informationen on BRITE-Mission 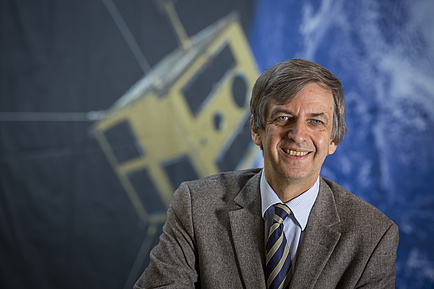 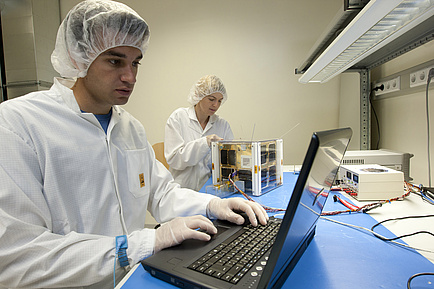 Launched in 2013, the nanosatellite TUGSAT-1 is the first austrian satellite in space. © Lunghammer - TU Graz 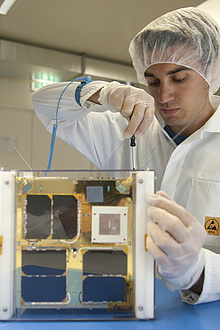