Above the clouds: turbomachinery of the future

Aircraft are becoming increasingly efficient, lower in emissions and quieter. The technology behind this is being co-developed and tested at TU Graz.

Engine components of the Airbus A380 were co-developed and tested at TU Graz.

The Wright brothers would have been impressed. The first aircraft engine of the aviation pioneers achieved a power of approx. 10 Kilowatt – today's engines for modern passenger airliners are around 40 Megawatt, and the Eurofighter with two jet engines has a thermal power of 500 Megawatts during sea level high speed flight at almost the speed of sound. This is equal to the total output of the Mellach power station near Graz. Performance optimisation is not limited to the military sector. Civil jet engines for passenger planes, apart from being more reliable, are becoming lower in emissions, more efficient and quieter to protect residents in the vicinity of airports against noise and to lower CO2 emissions and thus reduce fuel costs. "If you want to increase aircraft efficiency, optimisation of aerodynamic characteristics is an important point – both for the fuselage and wings as well as for the aero engine which effects the shape, operating cycle and weight of these machines. And this is where our research comes in," says Franz Heitmeir, head of TU Graz’s Institute of Thermal Turbomachinery and Machine Dynamics.

Thermal turbomachines are indispensable in modern life. They help cars to achieve more power, they propel aircraft, helicopters and ships, and they are present in almost every power plant. There they convert the thermal energy of the fuel into mechanical energy, from which generators ultimately produce electricity. Thermal turbomachines are therefore not only jet engines but also gas and steam turbines in power plants, compressors in process engineering and in the chemical industry as well as turbo chargers in cars. 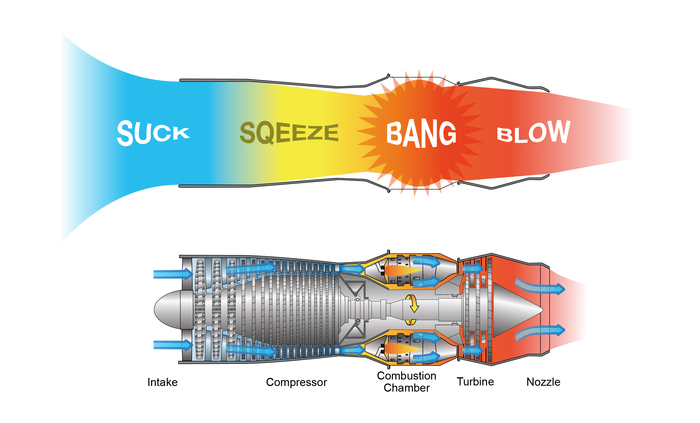 Simplified illustration of the working principle of a jet engine. Jet engines have four sectors. In the compressor, the sucked-in air is compressed and temperature and pressure are rising. This air is then mixed with fuel in the combustion chamber and ignited. The pressurised exhaust gas is guided at first through the turbine and expands. The energy taken from the flow is passed to the compressor. The remaining energy-rich flow is released in the nozzle, thus producing thrust to propel the aircraft.

At TU Graz’s Institute of Thermal Turbomachinery and Machine Dynamics, extensive experimental research is being conducted in the field of aero engines. This includes the flow analysis through the various engine components and the interaction of various engine parts, e.g. the interaction between high-pressure and low-pressure turbines. Not only is flow behaviour analysed, but also the mutual influence of the different components, which can excite dangerous levels of vibration. Another extremely important research area is the noise produced by the engine and its reduction. Additionally, the optimisation of the combustion is analysed in depth. The machine dynamic studies include the entire rotor dynamics. For these investigations, the Institute of Thermal Turbomachinery and Machine Dynamics at TU Graz is provided with an extensive research laboratory. On more than 1000 m2, some unique test rigs are in operation. The large scale test rigs are unusual for a university institute – there are, for instance, two compressor stations with a total power of more than 4.5 Megawatt. Owing to these unique test facility, the institute is an attractive research partner for the experimental investigation of gas-turbine components. “We have cooperation projects with all European engine manufacturers. We are particularly pleased about our recently built-up cooperation with General Electric, the world’s biggest aero engine manufacturer with headquarters in the United States,” continues Franz Heitmeir.

Recently, the Austrian Research Promotion Agency (FFG) has submitted a call for proposal with the name "Beyond Europe". It aims to increase and strengthen the international research activities and collaborations of Austrian companies and research institutions with partners outside of Europe. TU Graz’s Institute of Thermal Turbomachinery and Machine Dynamics together with the Austrian company "bionic surface technologies" as consortium leaders as well as GE US (Cincinnati, USA) and GE BEC (Bangalore, India) filed a proposal called "TURANDOT". It has recently been approved and it is expected that the research work on novel turbine elements for more efficient aircraft engines will start at the beginning of 2017.

In the "Beyond Europe" programme, the Federal Ministry of Science, Research and Economy is promoting closer integration of top Austrian research companies with companies, institutes and universities in leading global innovation countries. In the framework of eight supported cooperation projects, several partners are working together in approved projects and are being funded to the amount of 500,000 euros for a period of three years.

"In the TURANDOT project we are focusing on an important key component of future engines: the turbine interduct between high and low-pressure turbines. In a new integral solution, we want to minimize the length of the engine and the number of components, thus saving weight, and in turn saving fuel," explains Franz Heitmeir. In concrete terms, the researchers are pursuing three main topics in the project. Firstly, they want to study and finally reduce turbulence in the turbine interducts. For this, tests in a high-speed experimental turbine have been planned. Secondly, the measuring techniques including non intrusive optical laser measurement technique will be improved. Thirdly – and here the project partner "bionic surface technologies" comes into play – the surfaces in the interducts and thus aerodynamic characteristics are to be perfected.

"bionic surface technologies" was founded by two TU Graz graduates, Peter Leitl and Andreas Flanschger, and specialises in the application of nanostructured grooves based on sharks’ skin.

By means of these novel surfaces, friction can be minimized and flow resistance within the interduct reduced. The experiments will also be accompanied by acoustic tests to analyse and reduce the noise. The whole research work is supported by CFD simulations. The results of the research will be implemented in a new generation of aircraft engines by the national and international partner companies.