A mini solar power station for the balcony

Christoph Grimmer, together with TU Graz colleagues, developed a Plug&Play household storage system. This could cover a quarter of private energy requirement in the future. 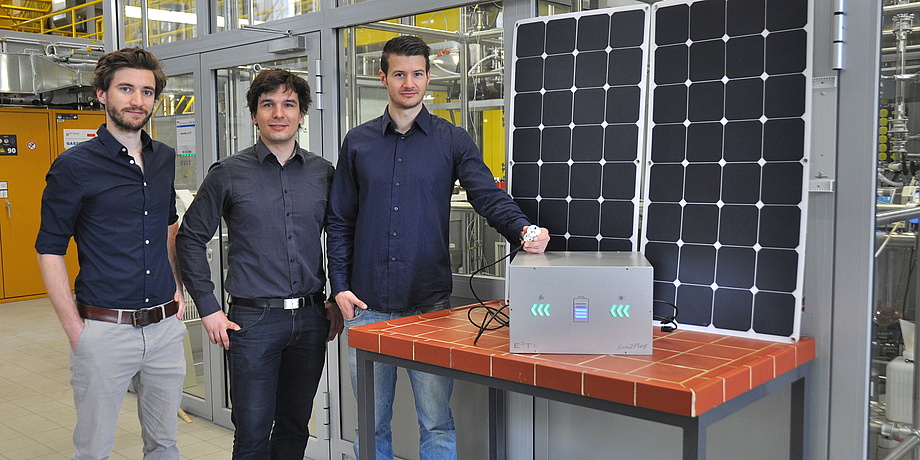 In the land of “Balconia”, a beer-crate sized photovoltaic system by which urban gardeners could harvest their own electricity could soon be joining other denizens, such as basil and vegetables. And if you don’t have a balcony, you can install the system on the roof or on a sun-exposed wall. The idea behind it is easy to explain: “A photovoltaic system feeds a small storage battery which is simply plugged into a mains socket in the household. This plug&play system which goes by the name of Sun2Plug stores energy during the day and releases it completely automatically at the time it is needed, usually in the evening,” explains Christoph Grimmer. Together with TU Graz colleagues Stephan Weinberger and Florian Gebetsroither, he’s behind the start-up “E2T – Efficient Energy Technology”, which developed the mini solar power station and is leading it to market readiness.

Green energy for everyone

“Currently, photovoltaic systems and combined storage systems are only offered at considerably larger scales. The reason for this is the pricey individual planning and installation,” says Christoph Grimmer. “In contrast to this, our product is standardised for the whole of Europe and thus from the point of view of manufacturing easily scalable.“
Sun2Plug has a capacity of 2 kilowatt hours, which covers about 25 per cent of the daily power consumption of the average household, and will cost around 2,000 euros. 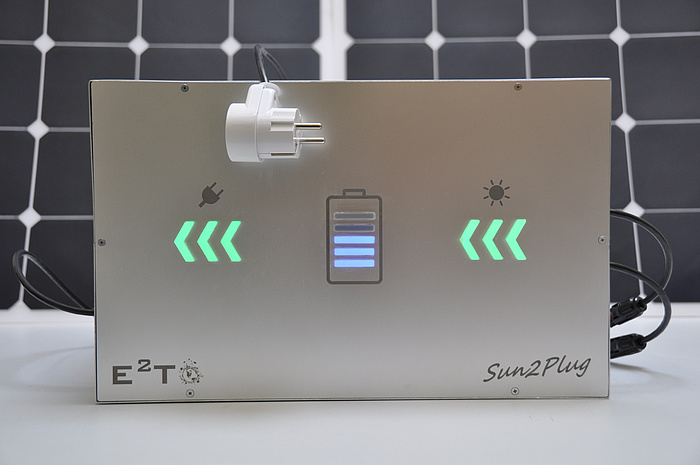 EU patent for the measuring technology applied for

The unique selling proposition of the invention is the measuring technology of the plug&play storage system called NetDetection. It tracks how much power in the household is needed by means of impedance measurement in real time. Exactly this amount of energy is then fed in by means of the power socket. An EU patent is currently pending. The young start-up founders are already in contact with several Austrian electricity providers. Their visions is as follows: “Electricity providers could make the system available to customers, which could then be set off against the electricity bill. How much energy was fed in by E2T Sun2Plug would then be seen in the itemized list of the monthly electricity consumption,“ says Christoph Grimmer. As soon as the system is indirectly paid for, electricity costs are then reduced for customers.
The first field tests using prototypes are due to start in the middle of the year along with a market analysis carried out by the young entrepreneurs. “We absolutely want to make sure that our product is consumer friendly, and we want to move away from ‘What is technically possible?’ to ‘What features do consumers want?’,” says Christoph Grimmer. The system is planned to be market ready by 2018.

Christoph Grimmer has already set a milestone in his doctoral thesis at TU Graz: He developed a new fuel system which he implemented in a prototype that can convert stored energy into direct current at high efficiency. At the same time he managed to do without platinum, thus considerably reducing the costs of the fuel cell. This development lays a foundation stone for future fuel cells, which can also directly convert alcohol into electrical energy using a simple system configuration. “In the future, ethanol from biowaste could be converted into electricity cheaply and without emissions at high efficiency,” explains Christoph Grimmer.

For his doctoral thesis, Christoph Grimmer, 30 years old and from Upper Austria, won the Award of Excellence from the Federal Ministry of Science, Research and Economy and the Sponsorship Prize of the Technology and Society Forum in 2016. For his master’s thesis, he came second in the Johann Puch Innovation Award 2014. In addition to his start-up, he works at the Institute of Chemical Engineering and Environmental Technology at TU Graz, where he completed his master’s and doctoral studies. On top of this, he will finish a master’s degree in economic sciences at the University of Hagen.