Photographic material available for download at the end of the report.

Scientific top performances for practical applications: that’s the challenge for the teams at the RoboCup – the world championships of intelligent robots. 3,500 participants from 45 countries and regions competed against each other at the RoboCup2016 in Leipzig from 30 June to 4 July. Two teams from TU Graz were also there and gained top positions in their respective disciplines. Team TESUDAR won in the RoboCup Rescue league in the Autonomous Exploration competition and became world champion. Team GRIPS, which was only founded in autumn 2015, entered the RoboCup Logistics league and won third place straight away. The team also won Rookie of the Year. Gerald Steinbauer, assistant professor at the Institute of Software Engineering at TU Graz and scientific advisor to both teams is proud. “The commitment, knowledge and abilities of the students are amazing and enable us to be successful at international competitions.”

Team TEDUSAR – Technology and EDucation for Urban Search And Rescue robots – is one of the most successful student teams of TU Graz and has been working on developing autonomous search-and-rescue robots to support rescue teams in disaster operations for five years. The special challenge of this research discipline is to achieve the best possible representation of the environment using sensors to navigate to the target safely in an unmanageable situation and unknown environment. Team TEDUSAR consists of the four master’s students Konstantin Lassnig, Stefan Loigge, Peter Kohut and Alexander Buchegger and doctoral student Clemens Mühlbacher from the subjects of telematics and computer science. The team has participated in the RoboCup since 2012 and in 2016 was able to win through against 18 international rescue robot teams in the Autonomous Exploration discipline. TEDUSAR distinguished itself by a stable environmental perception and robust motion planning. Even in 2014 the team was victorious at the Brazilian world championships in the discipline “Innovative user interface”.
The Rescue league was introduced into the RoboCup in 2001 due to experiences of the huge earthquake in Kobe, Japan. The league deals with basic research in the field of rescue robotics. In this league, the robots developed by international research teams operate in a simulated disaster scenario, such as for instance created by an earthquake or tsunami. Aided by a multitude of sensors, video cameras, infra-red sensors, 3D cameras, laser scanners, ultra-sound sensors, gas sensors and microphones, the robots have to find hidden, simulated victims in the rescue arena as autonomously as possible.

Team GRIPS – Graz Robust Intelligent Production System – is a very recent robotics team and was put together in the framework of the research core area Smart Production at TU Graz. The team came together in Autumn 2015 during a robotics practical in the master’s programmes in computer science, telematics and software development and is composed of the four master’s students Marco Wallner, Jakob Ludwiger, Sarah Haas and Thomas Ulz as well as doctoral student Clemens Mühlbacher. Much time and research spirit was invested in perfecting the robot in just half a year so that it could participate in the Logistics league of the RoboCup – successfully, as it turned out. The team gained third place in its discipline behind the teams Carologistics (RWTH Aachen, Germany) and Solidus (Höhere Fachschule Mittelland, Switzerland) and on top of this became Rookie of the Year. In the Logistics league of the RoboCup, three robots have to make individualised products flexibly together. The robots plan, realise and optimise the material flow and supply products according to dynamic orders in the modern manufacturing landscape. However, in the run-up neither are the production plants available nor is the product or supply team known, and the production must be planned online by the robots. The Logistics league is a sub-discipline of the RoboCup Industrial league, which represents a shared framework for the industry-oriented application leagues of the RoboCup.

Robotics is anchored in the Field of Expertise "Information, Communication and Computing", one of five strategic FoE of Graz University of Technology.

The international RoboCup Community has the objective of promoting the development of intelligent robots through competitions that serve researchers, scientists and students from around the world as an attractive testing ground to demonstrate their robots. 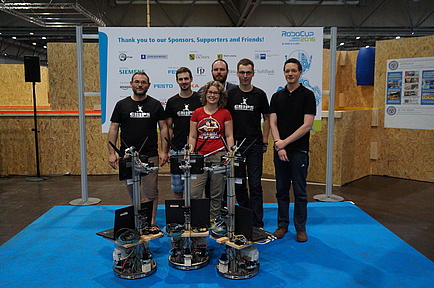 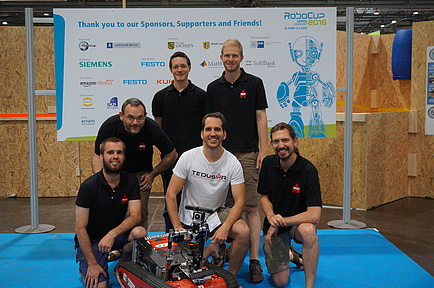 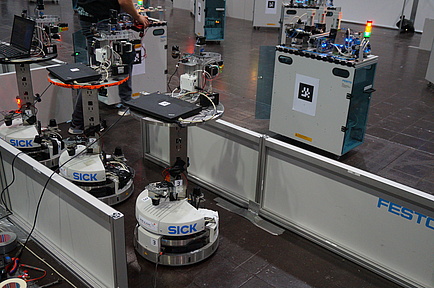 In der RoboCup Logistics league three robots have to make individualised products flexibly together. The robots plan, realise and optimise the material flow and supply products according to dynamic orders in the modern manufacturing landscape. 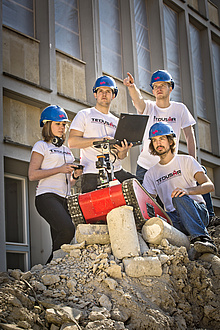 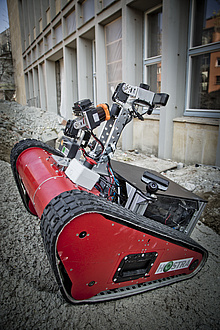