DAVE, a real gate of TU Graz to simulated 3D worlds, will be 10 years old this year. This will be celebrated with the 1st Graz Virtual Reality Night which will give insights into current research questions and applications. 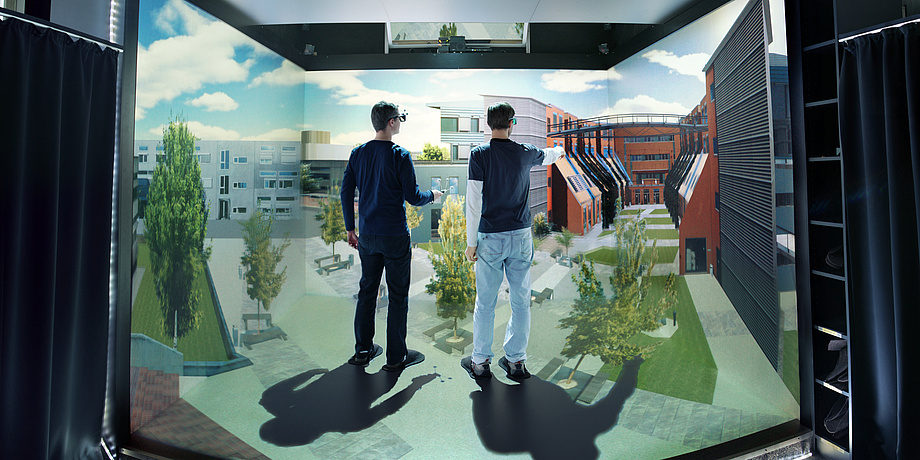 DAVE is a real door to simulated worlds with which TU Graz researches into and develops virtual reality technologies. © DAVE - TU Graz

Walking through the Vienna Rail Station before construction work had even begun. Visiting unfamiliar sitting rooms which don’t actually exist. Or exercising life-threatening drills without actually being in danger. What makes this possible is DAVE – a real door to simulated worlds with which TU Graz researches into and develops virtual reality technologies. DAVE is a big box measuring 330 x 270 x 330 cm consisting of four projection areas  – front, left, right and on the floor. For entry into the 3D simulated worlds you need to wear thick felt overshoes to keep the projection surfaces free of dirt, and a par of special shutter glasses – known jokingly as antler glasses.

On the occasion of the 10th anniversary of DAVE, four institutes of TU Graz along with Fraunhofer Austria are staging the 1st Graz Virtual Reality Night. On Tuesday 28 June, there will be live demonstrations at 5pm and an opportunity for people to immerse themselves in virtual worlds. Besides DAVE, researchers will also be presenting the TILED display project, in which many single displays are integrated into one extremely large display for ultra-high definition immersive visualisation. On top of this, there will be demonstrations of current research results and applications for virtual learning environments for interested visitors.

DAVE stands for Definitely Affordable Virtual Environment and in the current set-up costs considerably less than comparable installations. The fundamental idea of the design was to work as cheaply as possible with traditional hardware with replaceable parts. In DAVE, which was inspired by a similar construction at TU Braunschweig, eight typical commercial computers with 3D-capable graphics cards produce images which are projected onto the different projection surfaces by four projectors. The main computing power is provided by another computer on which the actual simulation runs. The experimental subjects wear so-called shutter glasses – glasses which only allow images to be viewed through one eye at a time in rapid succession, thus providing the “right-in-the-middle effect”. The glasses are synchronised with the projectors over a radio connection and only show the image which the left or right eye is meant to see in alternation. Synchronisation is independent of the PCs so that, for example, new cost-intensive graphics cards do not have to be made. 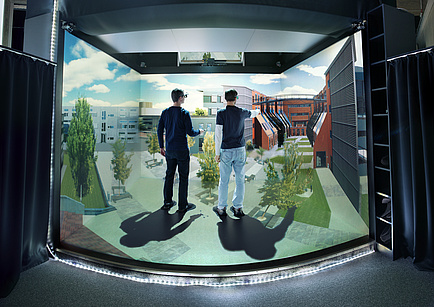 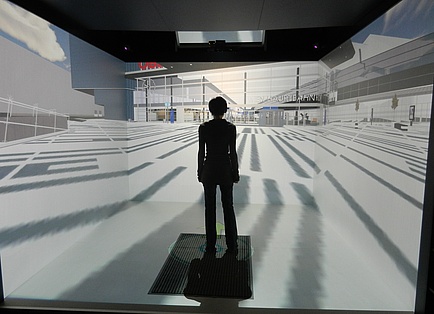 With DAVE, guidance systems and signaging, for example of the new Vienna Railway Station, can be virtually testet for its suitability for daily use. © DAVE - TU Graz 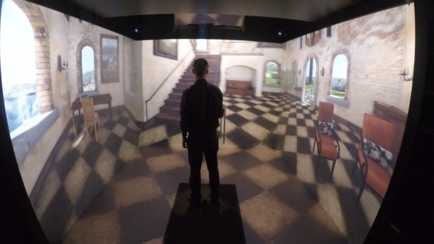 Another possible application of DAVE lies in architecture and interior design: You can virtually tour buildings and housing spaces. © DAVE - TU Graz 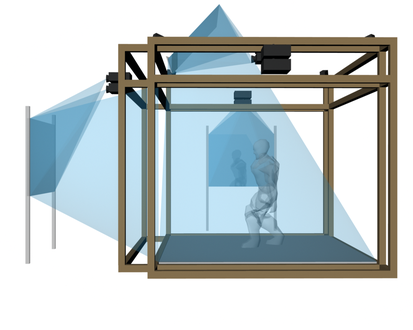