Stefan Freunberger, beneficiary of an ERC grant at TU Graz, shows in Nature Energy the influence of the reactive singlet oxygen on ageing processes in non-aqueous oxygen batteries. 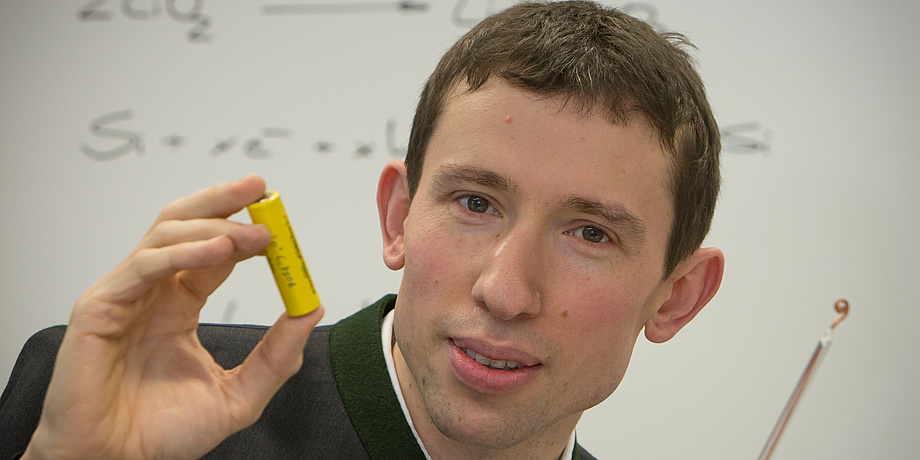 Stefan Freunberger, beneficiary of an ERC Grant at TU Graz, investigates ageing processes in non-aqueous batteries. © Lunghammer - TU Graz
It has been known in biology for a long time that the excited oxygen molecule singlet oxygen is the main cause of ageing in cells. To counter this, nature uses an enzyme called superoxide dismutase to eliminate superoxide as a free radical. Superoxide also occurs in cell respiration for energy production and is the preliminary stage and thus source of singlet oxygen. TU Graz’s Stefan Freunberger has now stumbled upon astonishing parallels of oxygen chemistry in battery systems.

He investigates ageing processes in non-aqueous batteries, such as oxygen batteries – in other words, battery systems in which oxygen reacts with lithium, sodium magnesium, for example, thus releasing energy. The energy density of these next-generation batteries is considerably higher than in today’s lithium-ion batteries, but their fast ageing still makes them currently unusable. “I’ve realised for a long time that superoxide cannot be the single cause of ageing, as previously assumed. Singlet oxygen is quite well known because it’s so reactive. But nobody had checked to see if it occurs in batteries. Not least because there weren’t any methods to detect it there,” describes Freunberger. In the current issue of Nature Energy, Freunberger describes the detection methods which have been developed and shows that singlet oxygen really is mainly responsible for ageing in non-aqueous oxygen batteries.

“From the point of view of research, this is a gold mine. It shows that in all electrochemical activities in which oxygen is involved – and this is usually the case in battery chemistry – singlet oxygen can be of importance. The methods used to detect singlet oxygen can also be applied in other areas,” says Stefan Freunberger.

On top of the problem recognition and methodology development, the article in Nature Energy also provides an initial approach to how the storage cell can protect itself from the reactive oxygen species. “In essence, the battery needs the function of the enzyme superoxide dismutase. We were able to identify a class of molecules which can fulfil this function. There has to be a suitable way of getting the “enzyme” into the battery system – either through the electrolyte itself or by means of an additive which dissolves in the electrolyte. This is an initial approach that works but it is definitely not the optimum way. Behind this big door which we pushed open, there is a lot of work to do,” says Freunberger.
This project is anchored in the Field of Expertise “Advanced Materials Science”, one of five research foci of TU Graz.

The work was produced with the help of colleagues from several institutes of TU Graz, acib competence centre, Université Montpellier, the University of Southampton and the French research network RS2E.
Stefan FREUNBERGER
Dipl.-Ing. Dr.sc.ETH
Institute for Chemistry and Technology of Materials
Phone: +43 316 873 32284
Mobile: +43 680 2040 594
Email: freunberger@tugraz.at