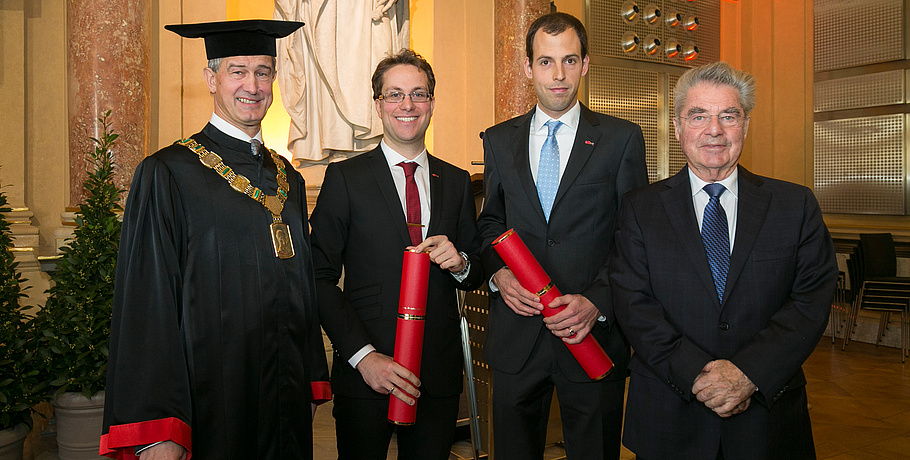 In the persons of Andreas Eitzlmayr and Carlo Alberto Boano, TU Graz has two excellent graduates and researchers of whom we are proud.

They obtained only the very best grades – from upper school to bachelor’s degree to doctorate. Andreas Eitzlmayr and Carlo Alberto Boano were awarded their doctorates “sub auspiciis praesidentis” – under the eyes of the president – in the Great Hall of Graz University of Technology on Monday, 8 February 2016. An honour for all those who have followed the path of achieving top possible results. In the course of the ceremony, the two engineers received the Ring of Honour bearing the federal eagle directly from Federal President Heinz Fischer. “In the persons of Andreas Eitzlmayr and Carlo Alberto Boano, TU Graz has two excellent graduates and researchers of whom we are proud. I’m delighted that we could accompany them a short distance on their path and I wish them the very best for the future – both professionally and privately,” said Harald Kainz, Rector of TU Graz.

Born in Wels in 1985, after gaining his university entrance qualification at HTL Vöcklabruck, Andreas Eitzlmayr decided to read process engineering at TU Graz in 2005. He concluded his diploma studies in 2010 and then his doctoral degree in process engineering with distinction at TU Graz in 2015. Professionally, he continued at Graz University of Technology for a few years – both at the Research Center Pharmaceutical Engineering (RCPE) and at the Institute for Process and Particle Engineering. Only a few days ago Andreas Eitzlmayr returned from a few months break, and has been employed by SML Maschinengesellschaft in his Upper Styrian homeland since February 2016.

In his doctoral thesis “Modeling of high-viscous flow and mixing in co-rotating twin-screw extruders” Eitzlmayr crucially further develops the so-called Smoothed Particle Hydrodynamics (SPH) method, which enables the fluid dynamics and mixing in complex-shaped mixing apparatus, such as e.g. extruders, to be simulated. In doing this Eitzlmayr carried out fundamental pioneering work to optimise the design of screw extruders. These findings are very relevant for pharmaceutical processes when it comes to mixing materials in suitable carriers using this technique in order to increase their solubility and thus bio-availability in the human body. In his leisure time Andreas Eitzlmayr is an enthusiastic cyclist, equally at home on racing or mountain bikes. He also counts high Alpine mountaineering, ski touring and hiking among his favourite hobbies.

Born in Alba, Italy, in 1985, Carlo Alberto Boano complete his school education at Instituto Tecnico Industriale “Giancarlo Vallauri” in Fossano and earned a Bachelor of Sciences in computer engineering at the Politecnico di Torino in 2006. In 2009 he concluded his master’s studies in computer engineering cum laude in the framework of an ERASMUS double-degree programme at the Royal Institute of Technology (KTH) in Stockholm and the Politecnico di Torino. After holding professional positions in Stockholm and at the University of Lübeck, Carlo Alberto Boano has been at TU Graz since 2013, first as a university assistant and since 2015 as assistant professor at the Institut for Technical Informatics, where he is writing his doctoral thesis.

In his doctoral thesis "Dependable Wireless Sensor Networks“ Boano analyses the disturbing influence of the environment on the performance of the internet of Things. The Internet of Things is the name for miniaturised computers which communicate with each other wirelessly and are integrated as tiny systems in any possible object. By means of a new methodology whose efficiency Boano has been able to prove, disturbing environmental influences on IoT systems can be predicted and compensated for. In this way disturbances in the Internet of Things can be prevented and their reliability increased. Besides technical informatics, Carlo Alberto Boano enjoys sports – from cycling and kayaking to swimming, and he speaks five languages, which benefit him not only professionally but also in his hobby – travelling. 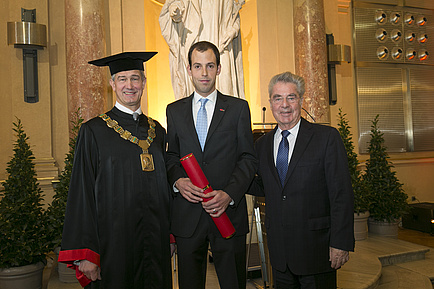 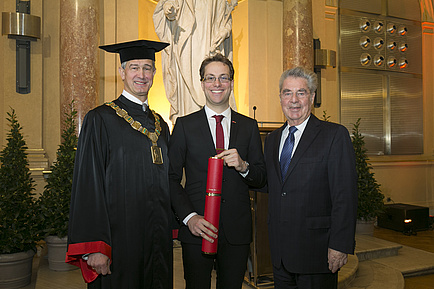