Styria is the number one research region in Europe

With a research and development share of 5.16 per cent in 2015, Styria comes out on top among European research regions for the first time. 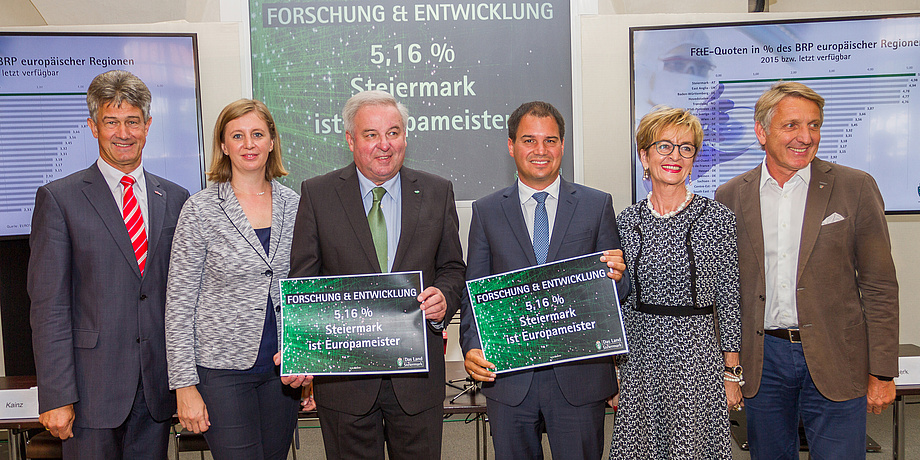 Investment in research and development is a key prerequisite for Styria for economic growth and new jobs. For this reason, the Styrian state government has anchored R&D as an important focus in a governmental agreement of future partnerships. Domestic companies, universities, universities of applied sciences and extramural research institutions have been redoubling their efforts in this area for many years. And successfully so. According to the latest findings of Statistik Austria for 2015, Styria has increased its R&D share to 5.16 per cent of its gross regional product and thus expanded its position as research region number one in Austria.  And in comparison with 276 EU regions, Styria also lies at the top. Just behind Styria is the British region East Anglia with 4.98 per cent and Baden-Württemberg with 4.94 per cent.

In this context, State Governor Hermann Schützenhöfer points out the consistent work of the state government in implementing this governmental agreement: “The set goal of 5% for the year 2020 has already been achieved. This is a great success but we still have lots of work to do because more innovation means more prosperity for Styria. The current results confirm our policy in continuing to position Styria as THE innovation region of Europe and strong business location.” Schützenhöfer highlights the great importance of the topic and emphasises: “If you invest in research and development, you put your foot in the door for future jobs. Research secures and creates work.”

“We are fighting to strengthen research and development in Styria even more. The world’s most modern tunnel research centre on mount Erzberg, the extremely sophisticated steelworks in Kapfenberg, the test environment for self-driving cars in the Styrian automotive cluster, and the most innovative wind turbines in the wind farms of Energie Steiermark – to name a few examples. On top of this, this year we’ve brought a world-class microelectronics research centre in the form of Silicon Austria to Styria. Together with many partners in business and the combined forces of our universities, we’ve succeeded in massively reducing unemployment for months in all the Styrian regions and have raised the research and development share to a sensational 5.16%. Styria is at the top of Europe,” exults deputy state governor Michael Schickhofer.

Cooperation as recipe to success

One important reason for Styria’s top position is the cooperation between business and science, says state minister of science and economy Barbara Eibinger-Miedl: “The cooperation of companies with universities, universities of applied sciences and extramural research institutions is outstanding in Styria and one of our big secrets of success.” Here, the state minister is referring to the Styrian research company Joanneum Research and the COMET competence centres. Styria is involved in 25 of 44 Austrian centres, and 19 of them have head offices in Styria. “The competence centres contribute essentially to the top position of Styria in R&D and provide with their projects important results for the further development of products and services in domestic enterprises,” says Eibinger-Miedl. Competence centres are also valuable employers in the area of research. Of the approximately 1,100 employees who work in Styrian centres, 867 are researchers.

Also in the course of the last call for K2 centres – these are the biggest competence centres – Styria has impressively proved its number-one position in Austria. There centres were approved. And two of them, the IC-MPPE in Leoben and the K2 Digital Mobility in Graz, are based in Styria.

Styria as a microelectronics hotspot

In order to be able to safeguard existing jobs and create new ones in the future, the state government together with companies and research facilities are vigorously backing sunrise industries. For instance, microelectronics, a key sector for digitalising the economy, in which Styria has showpiece companies, such as ams, AT&S, EPCOS, Infineon or NXP. The microelectronics cluster Silicon Alps, established together with Carinthia last year, already has 72 members. The Silicon Austria Lab will take up work later this year at locations in Graz, Linz and Villach. The research centre will make an important contribution to positioning Styria as an internationally leading region in the field of microelectronics. Joanneum Research and TU Graz are responsible for the overall coordination of Silicon Austria, and the executive management of the centre will also be based in Graz. This will lead to the creation of 200 highly qualified new jobs in Styria. Federal government, the states of Styria, Carinthia and Upper Austria and the companies will invest a total of 280 million euros in Silicon Austria in the next five years.

“I congratulate industry, politics and our science partners in Styria on the outstanding cooperation which has made all this possible,” says TU Graz Rector Harald Kainz. And he goes on to predict: “The research share will be further boosted by Silicon Austria, the new world-class research centre for microelectronics with its headquarters in Graz. So-called electronics-based systems dominate all areas of our lives today – from mobile phones and cars to home-control systems – and are turning microelectronics into a significant growth segment. In the form of Silicon Austria, Austria is combining its forces in this field, creating hundreds of new jobs and preparing itself for international competition.”

“The new record R&D share shows that the intensive efforts to broaden R&D at the state level have been crowned with success. In addition to our leading companies, innovative small and medium-sized enterprises are contributing more and more to strengthening Styria as a R&D stronghold – not only in Austria but also in the whole of Europe,” stresses Josef Herk, president of the Economic Chamber.

“Research and industry is a symbiosis which is making Styrian companies ready for the world market and equipping them with a competitive edge. In all branches of industry, work is being done on innovative products and services. With particular intensity in the car industry and in electronics and electrical engineering, but also in engineering and plastics. With an annual amount of 1.69 billion euros – more than three quarters of all R&D expenditure – industry is the most important driver of the Styrian research sector,” says Angelika Kresch, Styrian management board member of the Federation of Austrian Industries and chair of the platform “Die Industrie”.