Scientists at the University of Graz and TU Graz have developed an active ingredient that reduces obesity and can prevent type II diabetes as well as non-alcoholic fatty liver disease. 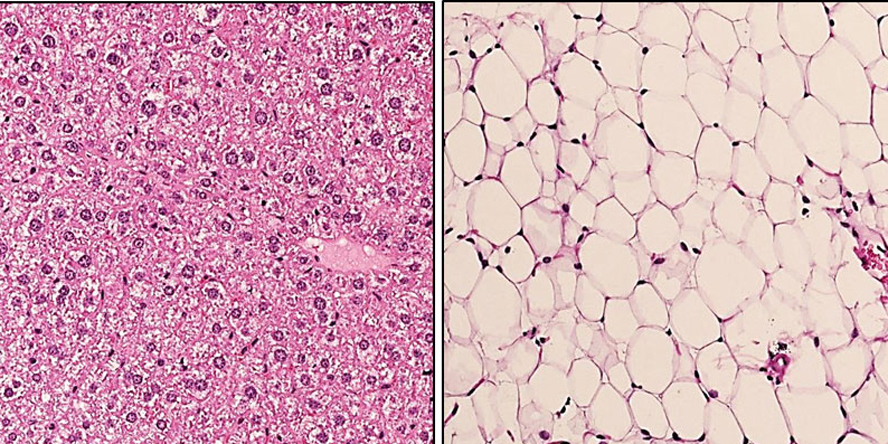 The temporary inhibition of the enzyme ATGL prevents insulin resistance and the development of non-alcoholic fatty liver disease. In the picture: liver- and fat cells in detail.

According to the World Health Organisation (WHO), around 1.9 billion people are overweight worldwide. 75 per cent suffer from non-alcoholic fatty liver disease and 400 million have type II diabetes. In addition to the psychosocial consequences of obesity, related diseases lead to a decrease in quality and length of life. Scientists at the University of Graz and Graz University of Technology have now developed an active ingredient that reduces obesity and can prevent type II diabetes as well as non-alcoholic fatty liver disease. The research results of the working groups of Rudolf Zechner, Robert Zimmermann (both University of Graz) and Rolf Breinbauer from Graz University of Technology were published in renowned scientific journal Nature Communications.

One of the main reasons for the development of metabolic diseases connected with adiposity is a higher level of fatty acids in the blood. These lipids are released from the adipose tissue by the activity of an enzyme called Adipose Triglyceride Lipase (ATGL). “If a person is overweight, an excess of liberated fatty acids released into the blood prevents the absorption of glucose into the muscle and fat tissue. Insulin resistance then develops, a precursor of type II diabetes,” explains Martina Schweiger, first and corresponding author of the publication. Furthermore, there is an increased influx of fatty acids into tissue that does not have the primary function of storing lipids – for example, into the liver. A build-up of triglyceride in this organ prevents it from functioning, resulting in non-alcoholic fatty liver disease.

No ATGL, no insulin resistance

“As the ATGL determines the amount of liberated fatty acids entering the blood, we wanted to inhibit this enzyme in order to treat the metabolic consequences of being overweight,” says Schweiger. In 2013, the working groups of Zimmermann and Breinbauer had already succeeded in synthesising a molecule called atglistatin, which prevents ATGL activity. In their new study, the researchers have investigated the effect of the atglistatin inhibitor using an animal model. “By turning off the ATGL, we were able to completely prevent insulin resistance and the development of non-alcoholic fatty liver disease. Furthermore, there was a reduction in weight, despite a rich diet,” explains Schweiger.

A crucial discovery was that ATGL must not be completely blocked. “If ATGL is inhibited completely, this does also lead to an improvement in obesity and insulin resistance, but causes a fatty heart, which can be fatal,” says the researcher. However, short-term inhibition does not have any dangerous side effects. “The absorption of the active ingredient atglistatin blocks the enzyme for six hours. After that, the body breaks down the inhibitor naturally. Then ATGL continues to work,” explains Schweiger.

The publication is another example of the successful cooperation of the University of Graz and the Graz University of Technology in natural sciences, NAWI Graz.