Karin Schaupp, chair of the University Council of TU Graz, handed over a cheque worth 1,000 euros to Team ‘kepler robotics’ of the Kepler Secondary School. The patron of the sponsoring partnership is state councillor Christopher Drexler. 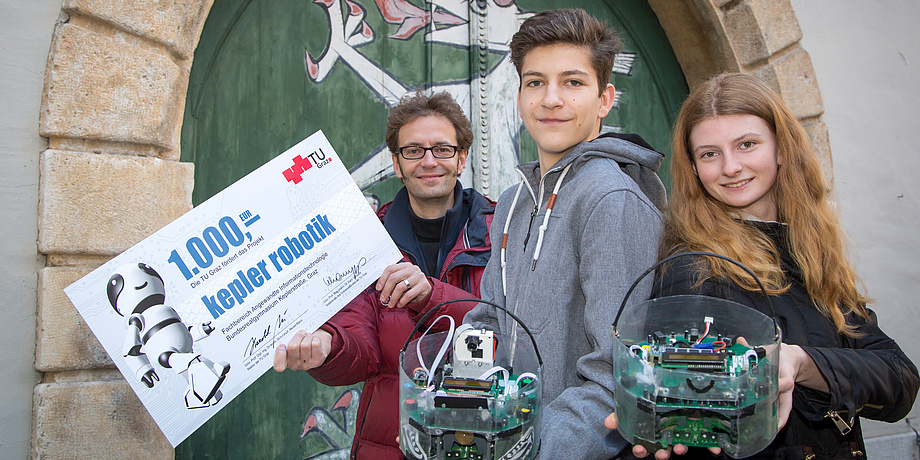 
BRG (Bundesrealgymnasium – a type of secondary school) Kepler in Graz ‘lives and breathes’ robotics and wants to bring as many pupils as possible into contact with robotics in the project ‘kepler robotics’. When, at an event state, councillor for science Christopher Drexler enthusiastically revealed the achievements of the school team – podium places at this year’s Robotics World Championship in Leipzig – TU Graz decided to financially support the ‘kepler robotics’ project. Karin Schaupp, chair of TU Graz’s University Council, handed over a cheque worth 1,000 euros to Kepler principal Franz Riegler as well as Nicole Bizjak and Leander Brandl from the ‘kepler robotics’ project in the presence of state councillor Christopher Drexler and TU Graz Rector Harald Kainz.

Karin Schaupp and Harald Kainz, Rector of TU Graz, made a joint statement: ‘The outstanding achievements and commitment of ‘kepler robotics’ have impressed us so much that we wish to contribute some financial assistance. We’re very grateful to BRG Kepler for inspiring their pupils with the topic of robotics and technology, and thus making them curious about studying at the TU.’

‘We’re very proud of our robotics-inspired pupils and we’re endeavouring to make this enthusiasm sustainable. Many team members start a course of studies at TU Graz after their school leaving exams, continue to be active in the robotics team at the TU, and end up working in companies relevant in the field. The interest in ‘kepler robotics’ is huge in any case. This year alone there were almost 180 registrations from the first to the eight class – that’s almost a third of all the pupils at BRG Kepler,’ says Franz Riegler, principal of BRG Kepler.

‘The enthusiasm and fervent commitment – accompanied by the highest professionalism – impressed me while talking with the team members. This urged me to make a spontaneous appeal for donations on the occasion of this year’s Science Prize Gala,’ explained state councillor for science Drexler – himself an graduate of BRG Kepler. ‘I hope that others will follow the model example of TU Graz.’

In the ‘kepler robotics’ project, pupils have built and programmed robots and participated in international competitions, such as the RoboCup since 2008. With tremendous success. The team has won Austrian championship titles in various RoboCup disciplines, such as football and rescue robotics more than 30 times. The best Austrian RoboCup Junior Austrian Open team gets a ticket to participate at the World Championship, which in the last years was held in Germany, China and Brazil, and this represents and enormous financial and organisational burden for the school team. ‘We see it as our duty to make it possible for our qualified pupils to have this international experience. Unfortunately even after eight successful years there has been no official financial support for ‘kepler robotics’. This makes us so much the more grateful for each donation, such as that from TU Graz,’ says Kepler computer scientist Leander Brandl.

At TU Graz there are two student teams – TEDUSAR and GRIPS – which specialise in the fields of rescue robotics and logistics. Both teams picked up top positions in their respective disciplines at the 2016 World Championship. Team TESUDAR won in the RoboCup Rescue league in the Autonomous Exploration competition and became world champion. Team GRIPS, which was only founded in autumn 2015, entered the RoboCup Logistics league and won third place straight away to become rookie of the year. An important driving force behind Austrian RoboCup activities at all levels is Gerald Steinbauer, researcher at the Institute of Software Engineering of TU Graz. It was thanks to his dedication that the 2009 RoboCup World Championship took place in Graz. Apart from the robotics teams, TU Graz students in the English master’s programmes Computer Science, and Information and Computer Engineering have the possibility to specialise in robotics. 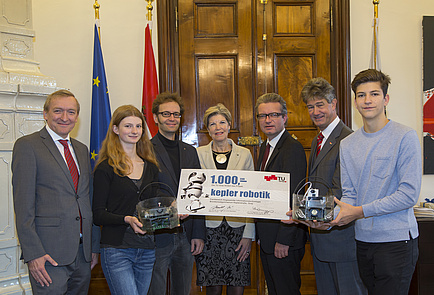 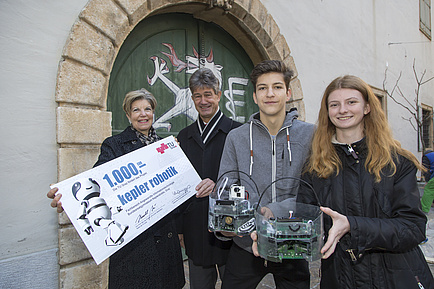 Impressed by the outstanding performance of the students and teachers engaged in "kepler robotik": Karin Schaupp, chair of the University Council of TU Graz, and Harald Kainz, Rector of TU Graz, support the project "kepler robotik". In the picture with Konstantin Andritsch and Désirée Rentz, both students at BRG Kepler. © Lunghammer - TU Graz