"Green Hydrogen Only with the Expansion of Renewable Sources"

Alexander Trattner heads HyCentA at the TU Graz campus and is convinced that hydrogen is part of the solution for a climate-neutral energy system. What is needed is speed and investment. 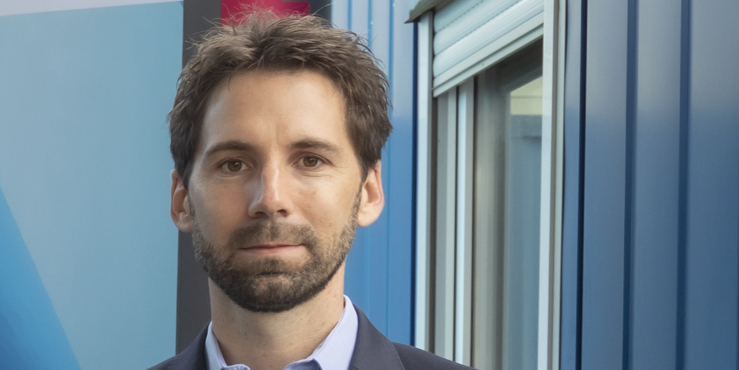 News+Stories: If your neighbour asks you if they can drive their car or run their central heating now on hydrogen? What do you say?

Alexander Trattner: I like to start with the status quo of hydrogen. It is already an established energy source today. Consumption is currently around two per cent of total global energy consumption, for example in fertilizer production, petrochemicals and the chemical industry. But all this is fossil-produced hydrogen from natural gas. Green hydrogen, on the other hand, is part of the solution to get our energy system on a climate-neutral path. Hydrogen will enable the expansion of renewable electricity sources and their temporal and local integration into the energy system. And yes, you can already drive your car on hydrogen. Fuel cell vehicles are already being mass-produced today in the second generation. And the vehicles run with a service life and reliability that are perfectly adequate for a passenger car.

Why are you so convinced about hydrogen?

Trattner: I see hydrogen as an important building block in the energy transition. We need to reduce greenhouse gases, and for that we need three strategies: 1. the expansion of renewable energy sources and their integration and storage in our energy system. Hydrogen is a key to this. 2. the switch to more efficient technologies, that’s where fuel cells immediately comes into play. And 3. a look at our consumption of and recycling of resources – here, too, electrochemical energy converters offer many advantages.

What are the misconceptions about hydrogen?

Trattner: This is a very long list. “Hydrogen is dangerous, hydrogen is harmful to the climate, it is far too expensive, it can’t be transported, it can’t be stored, it goes through all materials” and so on. There is a ludicrous lack of information about hydrogen as an energy carrier and its technologies. And that is understandable because the maturity of the individual technologies is very different. You can’t lump everything together, and this often leads to misunderstandings.  Green hydrogen in particular is still significantly more expensive to produce than fossil hydrogen. This requires research and development for more efficiency, the expansion of renewables, the industrialization of electrolysis technologies and also measures to make the politics of hydrogen more attractive. All these things are ongoing, and I’m very optimistic that green hydrogen will become equally cheap or even cheaper than fossil hydrogen in the long run.

Where does it really make sense to use hydrogen?

Trattner: First of all, we have to replace the fossil hydrogen that is already being used with hydrogen produced from renewable energy. In addition, there are many other industrial processes that can be decarbonized with the use of hydrogen: pig iron production, production of copper or tungsten, all high-temperature processes, such as brick production. Moreover, with hydrogen as a secondary energy carrier, the energy surplus from wind, water and photovoltaics can be shifted from summer to winter. Then there is mobility. Hydrogen in combination with fuel cells is particularly well suited for vehicles that need long ranges, have high payloads and must be used very flexibly. This relates to heavy goods transport, public transport, larger passenger cars, shipping and even hydrogen-powered aircraft. These applications are all already emerging, and that’s where we’ll see hydrogen in the next few years.

What are its major outstanding issues?

Trattner: This is about the local and temporal integration of renewables into our energy system. We also have to be able to distribute this generated energy. In Austria today, one third is renewable and two thirds fossil. And of the two fossil thirds, we import over 90 per cent via a few pipelines. We have to try to expand renewables as locally as possible, i.e. to produce hydrogen in smaller plants and consume it locally. Large-scale electrolysis plants can produce renewable hydrogen in regions with a lot of wind and sun – the North Sea, northern Great Britain, the coast of Portugal, central Spain, southern Europe all the way to North Africa – and transport it by pipeline. To develop this at the same time would, of course, be ideal. At HyCentA, we deal with the entire chain of the hydrogen economy, from electrolysis to infrastructure technologies and mobility to measurement technologies, for example to determine the gas quality in the pipelines. This range helps us to identify problems and to go into them with research questions.

What is missing for green hydrogen to make a breakthrough?

Trattner: If we don’t start expanding renewable sources of electricity, there will be no renewable hydrogen either. And conversely, we cannot expand and manage renewables if we do not also expand power-to-gas technology, i.e. electrolysis. Both are proceeding too falteringly at the moment. It takes eight to nine years to see a new wind turbine in Austria – one year for construction, the rest for planning and approval. This is absolutely a matter for politics. We need to develop wind, solar and hydropower with maximum effort for the next 30 years.

What place can hydrogen take in the energy mix?

Trattner: What is needed is investment. 120 billion euros in renewable power plants, and 120 billion euros in the distribution grid. That is 2 to 3 per cent of GDP annually. Not doing this is not an option. Of course, we can’t shut down fossil fuels overnight. This has to be done gradually and with continual investment. Whether hydrogen will then have a share of 10, 30 or 50 per cent is something no one can seriously answer today. Today it’s two per cent, and it won’t ever be less. In the near future, policy-makers should concentrate more on getting the first concrete steps on the ground and not on constantly setting themselves even higher goals every few years. Who, if not us, can afford to really transform the energy system?

Can hydrogen offer solutions in the current energy shortage?

Trattner: Oh yes, of course. One example is a project by Energie Steiermark in Gabersdorf. There, green hydrogen is produced at an existing biogas plant in combination with photovoltaics via electrolysis, is bottled and transported to the Wolfram company’s plant 30 kilometres away, where it replaces fossil natural gas. Natural gas can be substituted locally in this way. Of course, this doesn’t happen overnight either. At the moment, the only solution is to save energy. The war in Ukraine started in February. The politicians could have said two or three weeks later, we have just under a third of our natural gas in the system in Austria, 90 per cent of it is from Russia, from now on energy saving is the order of the day. Right now there are still reserves in the gas storage facilities, but there is little or nothing more to come. I’m afraid the real problem will come next autumn.

This interview is part of the dossier "Green hydrogen - hype or hope?", in which experts from hydrogen and energy industry research at TU Graz answer the big, burning questions about the future of (green) hydrogen.

This research project is anchored in the Field of Expertise "Sustainable Systems", one of five strategic focus areas of TU Graz. Monthly updates from the world of science at TU Graz are available via the research newsletter TU Graz research monthly.