The Mobile Robot that Charges the E-Car

The fully autonomous, mobile charging robot finds its way independently to the parked electric vehicle (EV) and supplies it with energy. The prototype developed by TU Graz and the Austrian companies ALVERI and ARTI Robots is intended to contribute to the widespread use of e-mobility. 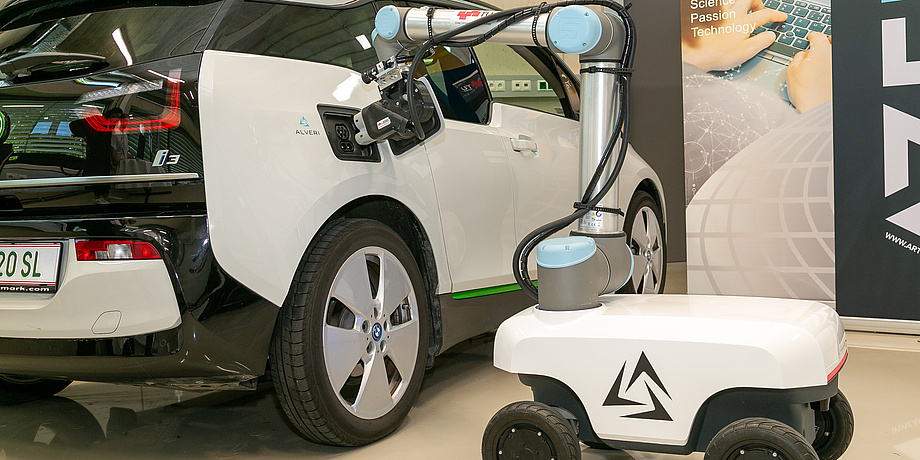 Picture material for download at the end of the text

It sounds convenient. The EV reports the need for charging and a mobile robot sets out to supply the parked car with energy – completely independently and without human intervention. The search for a charging station and any worry about the remaining range are thus a thing of the past. The prototype of such a charging robot developed by TU Graz and ALVERI and ARTI Robots is not quite so advanced yet – but the first demonstration worldwide comes very close to this vision (as can be seen here in the video).

Convenient charging as a boost for e-mobility

"The process of refuelling or charging a vehicle is not a major challenge for humans. But for an automated system, on the other hand, it is a very complex, millimetre-precise matter," reports Bernhard Walzel from the Institute of Automotive Engineering at Graz University of Technology (TU Graz). Walzel and his institute colleague, Helmut Brunner, already attracted attention in 2018 with a stationary charging robot. Now the two engineers have been working intensively with the two partner companies ALVERI and ARTI Robots on the demonstrator of an autonomous, mobile version. The motivation behind their endeavour is to help e-mobility gain more ground: "Across Austria, there are currently around 8,000 publicly available charging stations. This is a real stumbling block for the spread of e-mobility. Constantly thinking about how far away the next charging station is doesn't make for a relaxing drive. For this reason, we have to catch up on the charging infrastructure. A mobile charging robot, for example in multi-storey car parks, on Park&Ride lots or larger business parking areas, can make a significant contribution to this and take away concern about range and charging options."

A robot responsible for a defined area

The goal of the Upper Austrian start-up ALVERI, which is overall dedicated to sustainable mobility services and has launched and financed this specific project, involves the series production of e-charging robots. Ehsan Zadmard, CEO of ALVERI comments: "With the ALVERI CHARbO charging robot, we have not only shown what can sensibly be done with existing know-how in Austria, but have also given the starting signal for more cooperation around infrastructure, mobility services, vehicle concepts and much more in this country. Only in this way will we be in a position to help shape the future of mobility in Europe, and worldwide, and Austria can make a significant contribution here."

Before the charging robot is ready for series production, a number of optimizations still need to be made. At present, the robot is still connected to a power cable; the integration of a drive battery does not make sense for reasons of weight and cost, but above all from an ecological point of view. The project partners are therefore tinkering with the idea of a power supply via ground contacts. The software for controlling the robot is also to be integrated. At the moment it still runs on a separate PC. There is also potential for savings with the robotic arm, says Helmut Brunner: "There is currently no robotic arm on the market for this application specifically. We therefore used a conventional collaborative industrial robot arm, which allows movement capabilities in a very large radius. However, we don't need that much freedom of movement for the charging process. So there is still potential here for less weight and lower costs. The use of such a system only really pays off when a single robot is responsible for several cars and covers a defined area in a parking garage, for example."

In multi-storey car parks, semi-public parking areas at universities or customer car parks, for example, there could in future be a designated parking area for e-vehicles in which charging robots manoeuvre and supply the vehicles parked there. Adaptations in parking architecture might be necessary for this. Legal and safety issues also need to be clarified. Because one way or another, the robot will move in an area where people are on the move. Confidence in system safety is therefore a basic prerequisite. Konstantin Mautner-Lassnig from ARTI Robots adds: "Several safety mechanisms have been implemented in the whole charging robot. The mobile platform uses laser scanners to permanently scan the surroundings for possible obstacles and detects when an object gets too close. Then the platform immediately stops moving." A safety stop has also been provided for the very hypothetical case of someone holding their hand between the charging plug and charging port.

An open topic in e-mobility as a whole is interfaces, for example between autonomous systems, digital technologies and innovative drive concepts, as Bernhard Walzel attests: "There has been an incredible amount of movement in recent years in the development of e-vehicles, the necessary infrastructure, charging options and automated systems. It is now important that the individual systems also communicate with each other. At the moment, we still have to signal to the robot which car it should charge by opening the charging flap. The goal must be for the vehicle to signal its need for charging to the robot independently. Or that the driver activates a robot via an app. A lot will happen in the near future."

The ACstyria mobility cluster is also enthusiastic: "The concept of ALVERI and TU Graz is an important impulse in several future fields of mobility. Initiatives in the areas of digitalization, autonomous systems and also innovative drive concepts are important to further expanding our pioneering role," says Christa Zengerer, managing director of ACstyria.

The Institute of Automotive Engineering at TU Graz is now very experienced in the development of automated charging robots, but up to now they have not been mobile. ARTI Robots has now ensured this mobility with the universally applicable mobile autonomous platform CHASI. ALVERI brings experience in usability and application scenarios to the project and is also responsible for the design. Funding for the demonstrator was provided by ALVERI. Preliminary work comes from various public funding pots, mainly from those of the Wissenschaftsfonds FFG. An application for funding for further work is currently being evaluated by the Austrian Research Promotion Agency (FFG); the charging system is to be installed and tested in public spaces for the first time. 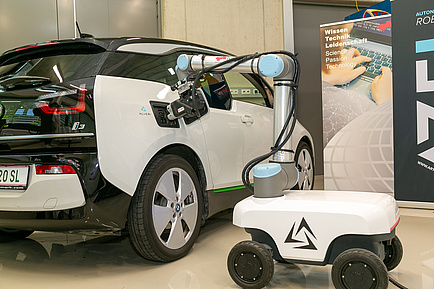 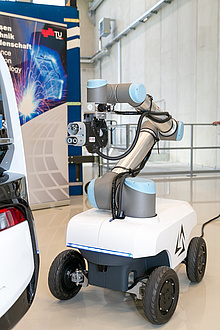 The automated robot arm guides the charging cable to the vehicle's charging socket with millimetre precision and is mounted on an autonomously navigating mobile platform. © Frankl - TU Graz 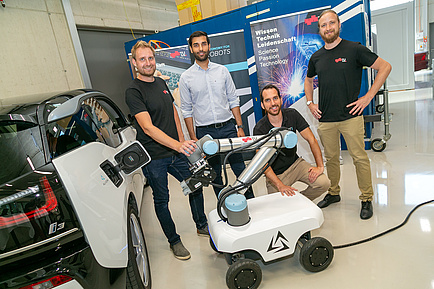