Ballroom instead of lecture hall: the TU Graz Ball 2017

Under the slogan “Living technology”, the TU Graz Ball 2017 was dedicated to the topic of Human & Biotechnology. The highlight for guests of the ball at Congress Graz was a virtual thought race. 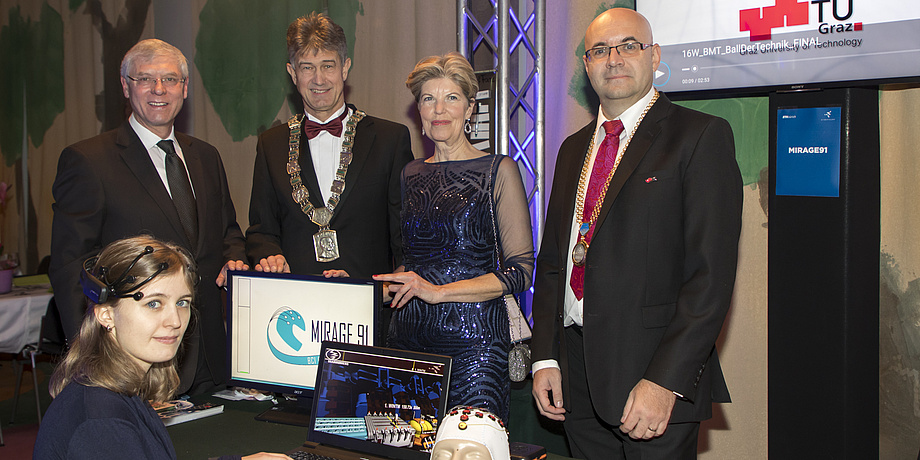 Johann Harer, CEO of Human. technology Styria, Rector Harald Kainz, Chairwoman of the University Council Karin Schaupp and Frank Kappe, Dean of the Faculty of Computer Science and Biomedical Engineering, together with a student at the virtual thought race at TU Graz Ball (from left). © Lunghammer - TU Graz

Photographic material available for Download at the end of the text.

Students, fans and members of TU Graz as well as well-known names from Styrian politics, industry and academia – altogether some 2,000 guests – came together yesterday at the 159th TU Graz Ball at Congress Graz on Friday 27th January. The focus of the traditional ball night this time was on the research area Human & Biotechnology. With many top-class partners, including the human technology cluster and Roche in Austria, TU Graz transformed the dance floor under the slogan “Living technology”.

Besides music, dance and cuisine, there were also several highlights. Ball guests could also pluck up courage and do an experiment on themselves by taking part in a thought-controlled virtual race. The principle behind such brain-computer interfaces was demonstrated by the Mirage 91 student team. Supported by TU Graz’s Institute of Neural Engineering, Mirage 91 took part at the world’s 1st Cybathlon in Zurich in the discipline “virtual race using thought control”. The Institute of Health Care Engineering presented a specially developed children’s locomotion device by which mobility-impaired small children are able to learn to walk. There was also a video presentation of the whole field of biomedical engineering.

And the midnight event included a number of high notes. Under the name “The Circle of Life”, the Graz Boys Choir and the University Orchestra Choir – 110 persons altogether – took to the stage together. The polonaise was conceived by Conny & Dado. The musical setting was provided by the Graz City Orchestra, the Ortwein band, the Roaring Swingers, Montevideo and K’s Live, and the TU Graz Students’ Union clubbing in the cellar vaults by DJ Serious & Friends. 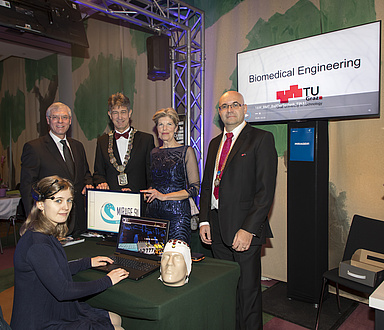 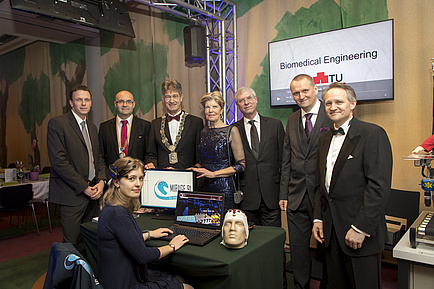 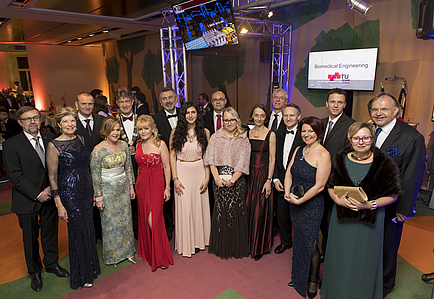 Representatives of the Ball committee with their companions at the beginning of an unforgettable Ball night. © Lunghammer - TU Graz 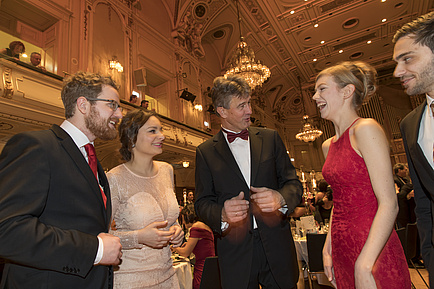