25 years of AustroMir: from Mozart balls to ion cannons

Franz Viehböck took off 25 years ago – the one and only Austrian in space. Researchers at TU Graz performed pioneering work in extraterrestrial materials analysis and facilitated the first ever networked communication between several locations on Earth and in space. 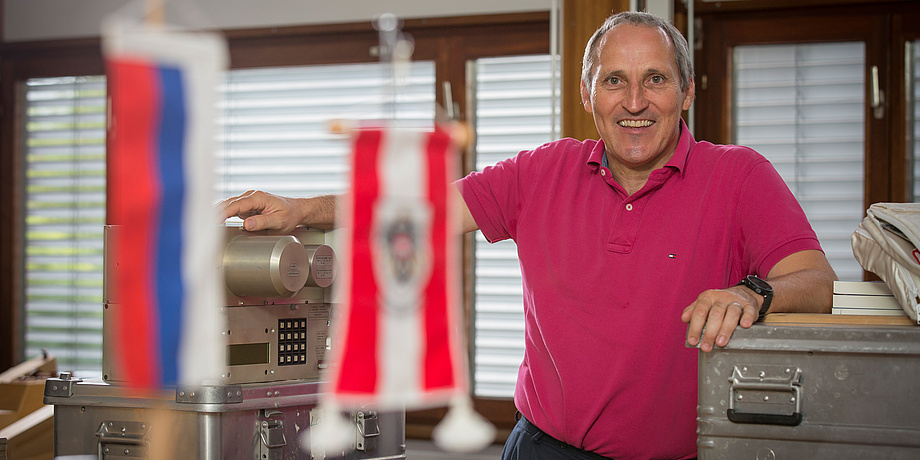 Franz Viehböck, the first and only Austrian in space. © Lunghammer - TU Graz

Friday, 4 October 1991: the Vienna Philharmonic Orchestra played the Blue Danube by Johann Strauss as Franz Viehböck glided into the Soviet space station “Mir”. On his arrival, Franz Viehböck did not just have a red-white-red flag, Mozart scores and other Austrian specialities in his bag – to the delight of the other Cosmonauts in the Mir – he had also brought devices for 15 scientific experiments with him. Involved in this were research groups of several Austrian universities and institutions, such as Joanneum Research, which was in charge of the AustroMir project, TU Graz, the Space Research Institution, the former research centre Seibersdorf, the Universities of Graz, Innsbruck and Vienna, and a number of companies. There was a focus on medical experiments and the effects of space on the human body. The “Motomir” project examined the function of the arm and leg musculature in weightlessness using a special ergometer. Central to “Audimir” was the question how exactly space travellers can localise sound waves. And in “Optovert” Franz Viehböck was subject to optical stimulation by way of a special mask to research into the cause of space sickness. “Cogimir” examined the performance of the brain during psychological and physical stress during the space flight. For “body fluids” and the question “how do humans react to acute circulatory stimuli in the weightless state?” Franz Viehböck even had to take his own blood samples.

Besides the nine medical experiments, physical experiments were also included in the programme – and here the TU Graz team was in great demand. But the experiment that was especially challenging to Robert Finsterbusch from today’s Institute of Communication Networks and Satellite Communications was “MIGMAS”. It involved the development of a novel and – above all – space-compatible materials analysis station. Robert Finsterbusch explains: “Micro-meteorite impacts, the special atmosphere of a space station and cosmic radiation lead to altered physical, electrical and mechanical properties of materials. In those days it was almost impossible – and even today it’s very expensive – to bring back to Earth samples of materials from space undamaged and free of contamination. It’s often necessary to analyse materials locally in the space station, for instance to assess the state of the outer shell of the spacecraft. So we had to develop a  light, robust, reliable and easy-to-operate materials analysis station for the chemical diagnosis of changes to materials caused by space station corrosion – no easy task, but we did a good job.” The MIGMAS ion microscope fulfilled all the requirements and worked as follows: a focused beam of ions meets the surface of the sample and scans it. It is possible to make a two-dimensional image of the distribution of certain elements in the sample by measuring the ion current. The team led by Robert Finsterbusch was responsible for the complete control electronics with data capture and imaging, while the team from the Seibersdorf research centre was responsible for the ion emitter and the ion optics. “We showed that such a complex precision instrument like an ion microscope can be taken into orbit without damage and can work there flawlessly. Franz Viehböck had absolutely no problems operating MIGMAS,” says Robert Finsterbusch.

In the subsequent years after AustroMir, the MIGMAS apparatus was regularly used during experiments by Russian cosmonauts. Furthermore, the equipment was in use in the ESA missions EUROMIR-94 and EUROMIT-95. The successor model to MIGMAS which included a mass spectrometer was developed for the formerly planned MIR 2 space station, built and handed over to the Russian partners.

As Viehböck returned to Earth on 10 October the collaboration of Finsterbusch with space station Mir did not come to an end. MIGMAS was activated on board five times altogether until July 1992 – replacement parts even had to be sent to the space station. Finsterbusch remembers: “High-voltage modules were also housed in the electronics of MIGMAS. One of them had to swapped. What today is unimaginable was in those days almost a matter of course due to the extremely trusting collaboration with the Russian team. A colleague from Russia came to Graz, looked at the replacement module, made sure it worked properly, put it in his bag and without any further tests and examinations sent it to Mir.”

Finsterbusch isn’t the only person at TU Graz to have vivid memories of AustroMir. Otto Koudelka, “father” of the first Austrian satellite in space – TUGSAT-1, was at that time responsible for the VIDEOMIR subproject, which made it possible for the first time to transmit linked video, sound and data from multiple locations on the Earth and in space – a forerunner of Skype, you could say. VIDEOMIR enabled the press centres in Graz and Vienna to connect with the space station Mir via satellite. Former Austrian federal president Kurt Waldheim was thus able to confirm in a live talk with Franz Viehböck that the Austrian cosmonaut had arrived safely in the space station. VIDEOMIR was also important for the “artsat” art project by the well-known Graz media artist Richard Kriesche. “This AustroMir subproject alone was incredibly complex. Altogether, the time pressure of the mission with its extremely short preparation time of two and a half years is remarkable even by today’s standards,” stresses Koudelka.
VIDEOMIR had lasting impact. It was re-employed in the German MIR-92 mission carried out in 1992 on behalf of the GERMAN Space Agency. For the ESA missions MIR-94 and 95, VIDEOMIR was even the primary communication instrument between the ESA centres and the flight control centre near Moscow. Up to 25 satellite stations were linked in in Europe.

He was in Moscow for four weeks around the time of the launch and apart from all the work remembers many happy hours and an overdose of Mozart balls. Franz Viehböck had a bag full of Austrian delicacies with him, from Hornig coffee and PEZ sweets to canned Viennese rice with meat. The Mirabell company was extremely happy about the television pictures of their weightless Mozart balls. “They promptly sent a thousand Mozart balls to Moscow, more than you can eat in a human lifetime,” says Otto Koudelka with a smile.

Willi Boskovsky, the concert master of many years of the Vienna Philharmonic Orchestra, was definitely proud of his nephew. No, not of Franz Viehböck, but rather Willibald Riedler. Proud of the man who had overall scientific responsibility for the Austrian-Soviet mission, and had earned the sobriquet “the pope of space”. A name, by the way, which he doesn’t like. He prefers “space professor”. The communications engineer Willibald Riedler is today inseparably associated with Austrian space research. Willibald Riedler was Rector of TU Graz in the 1970s, director of the Space Research Institute of the Austrian Academy of Sciences, head of the Institute of Applied Systems Engineering at Joanneum Research – and mentor and inspiration for many budding researchers.

Further information on past and current space projects of TU Graz 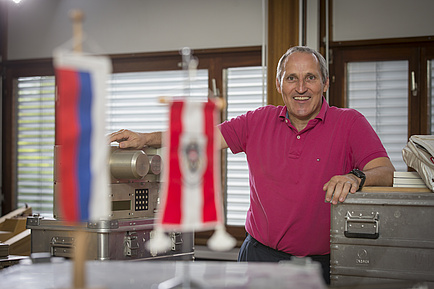 Franz Viehböck, the first and only Austrian in space. © Lunghammer - TU Graz 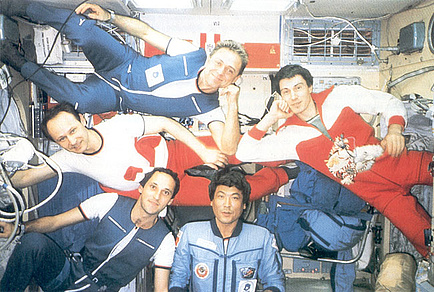 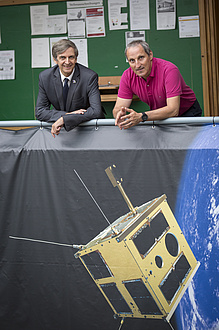 Otto Koudelka from TU Graz with Franz Viehböck. Koudelka made it possible for the first time to transmit linked video, sound and data from multiple locations on the Earth and in space. Furthermore seen in the picture: an image of TUGSAT-1, the first Austrian satellite in space. © Lunghammer - TU Graz 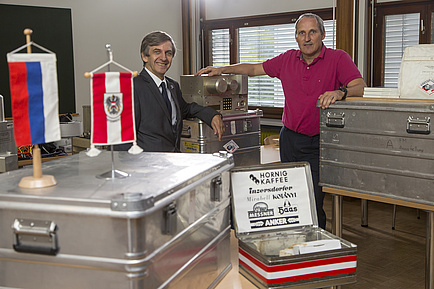 Otto Koudelka and Franz Viehböck with keepsakes of AustroMir mission, among them the metal box, which contained Austrian delicacys. © Lunghammer - TU Graz 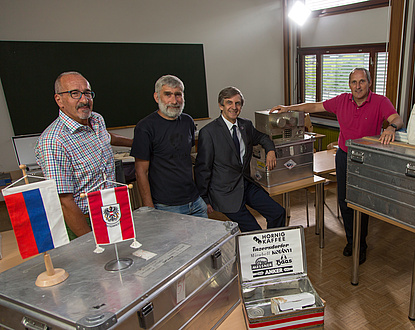