10 years of RoboCupJunior in Austria: A playground and career ladder for budding technologists 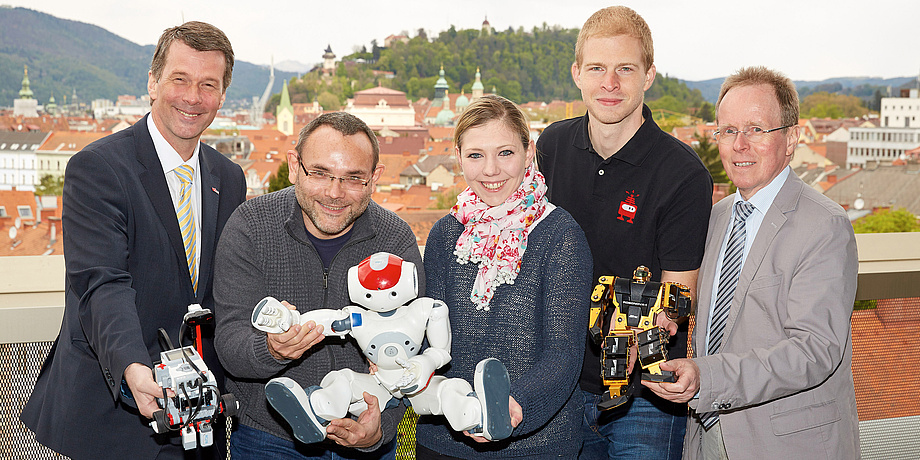 Further pics below at the end of the text
Embedded in the international RoboCup Federation, the educational initiative RoboCupJunior introduces school pupils from 10 to 19 years of age to the topics of software and programming by means of football-playing, dancing, and virtual and assistive robots. There have been intensive RoboCupJunior activities, including annual state championships, in Austria for ten years. TU Graz, Carinthia University of Applied Sciences and University of Applied Sciences Technikum Wien are the driving forces behind this. In 2015 these three universities transformed a loose RoboCupJunior network into the “RoboCupJunior Austria” which implements robotics courses for children and young people, supports schools with robotics-oriented teaching, organises summer camps, research weeks and open laboratory days, and organises the annual junior robotics championship “RoboCupJunior Austrian Open”.

Horst Bischof, Vice Rector for Research at TU Graz and computer scientist himself emphasises: “Computer scientists are constantly much sought after. According to the Austrian Chamber of Commerce, in Styria alone companies are currently in need of more than 2,000 experts. We want to motivate the best young minds to begin a study programme in computer science and, of course, to graduate. When young people come into contact with computer science, programming and software at school in a competition-oriented way, a spark can be created which leads to a conscious decision to do a computer science degree. Robots are here a successful lever because they fascinate children from nursery school upwards. TU Graz has been investing considerable resources in promoting budding robotics engineers for many years, and we’re also reaping the benefits. Our student teams in rescue robotics and robotics for logistics applications took first and second place in the RoboCup 2016 and thus count among the best in the world.”

Also, the students of Carinthia UAS in Villach have been very successful in developing three rescue robots by themselves in the RoboCup Rescue League and have a world championship title. At the RoboCup 2016 in Leipzig they picked up first place in the special event ”skillfulness”. Wolfgang Werth, head of the Systems Engineering degree course, explains: “RoboCup for students and RoboCupJunior for children and young people are suitable for all those who want to immerse themselves in the world of robotics in a playful and creative way. As a RoboCupJunior regional centre, Carinthia UAS supports schools by running workshops, robot rentals, and preparing teams for competitions.” On top of this, Carinthia UAS also organised the RoboCupJunior Austrian Open in 2010 and 2015.

UAS Technikum Wien has been successfully active in the RoboCup since 2014. “Since then, the whole field of robotics has become firmly anchored on UAS Technikum Wien. Only recently have we launched the Automation & Robotics research focus. The RoboCup student competitions are a fixed point in the calendar and participation is scientifically and financially supported. In this way the Austrian Kangaroos, a community team of students from UAS Technikum Wien and the Vienna University of Technology, were able to bring home the world championship title in ‘dribbling’,” explains Rector Fritz Schmöllebeck enthusiastically. Additionally,UAS Technikum Wien is a founding member of the association and has been active as a regional centre of the RoboCupJunior initiative since the beginning. UAS Technikum Wien was the organiser of the Austrian Open in the years 2009 and 2014. Teams were able to qualify for the world championships in Graz in 2009 and in Brazil in 2014.

The association RoboCupJunior Austria offers taster workshops in robotics in kindergartens and primary schools, with robots is the shape of bees for the very small and Lego robots for the bigger kids. Middle school pupils can enter the RoboCupJunior Primary and upper school pupils can enter the Secondary League. Students from the master’s level upwards can take part in the RoboCup Majors (as seniors). At the moment there is no provision for bachelor’s students in the RoboCup initiative, and for this reason TU Graz has this year started the “TU Graz Robotics Challenge” for students of this level. Gerald Steinbauer, TU Graz robotics expert, explains: “We can see quite clearly that the RoboCupJunior has a positive influence not only on technology and science abilities as well as social and team-oriented skills, but also shapes school and university progress and creates bridges to great careers. We have a number of extremely dedicated schools in Austria which regularly attract attention with their success in the RoboCupJunior competitions, such as BRG Kepler, HTL Weiz, VMS Nenzing in Vorarlberg and HBLWM Annahof in Salzburg, to name only a few examples. Behind these successes is an incredible amount of hard work – not only on the part of the supporting universities but also and especially by the teachers involved.”

Julia Nitsch and Stefan Loigge are true role models for the RoboCupJunior in Austria. Both of them came into contact with robotics at school, both chose to take computer science-related study programmes at university, and both continue to be shaped and guided by robotics.

Julia Nitsch
Born in Graz in 1992, Julia Nitsch became involved in the RoboCupJunior while a pupil at BRG Kepler and came into contact with TU Graz. She completed her bachelor’s and master’s studies in Information and Computer Engineering at TU Graz with distinction and both her theses dealt with aspects of robotics. She was a student assistant for many years and member of the most successful TU Graz student team TEDUSAR, which develops and builds search and rescue robots to support emergency services in disaster operations. After placements at Joanneum Research and research stays at TU Darmstadt and at the University of Zurich, Julia Nitsch now works at Ibeo Automotive Systems in Hamburg, the market leader in the development of LIDAR technology, which is an all-round environment sensing system used in the automotive industry. She’s aiming to do a doctoral degree in cooperation with Ibeo Automotive Systems and ETH Zurich and is at the moment settling formalities with the Swiss top university.

Stefan Loigge
Stefan Loigge, born in 1990, became fired up when his teacher at HTL Kaindorf brought a box of Lego to the class and wanted to build a robot. For the rest of his school days he was involved in the RoboCupJunior, and after leaving school decided to read Information and Computer Engineering at TU Graz, where he also got to know Julia Nitsch. Together they developed a soccer robot for the RoboCupJunior in the framework of their bachelor’s theses and later became members of the RoboCup Rescue Team of TU Graz. Stefan Loigge was part of the team that won first place in Autonomous Exploration in the RoboCup world championships 2016 held in Leipzig. His master’s degree dealt with a universal and reliable software architecture for autonomous robots. He’s currently involved with team colleagues in founding a start-up which provides robotics software to companies without their own dedicated robotics department so that they can ‘autonomise’ their own products.

RoboCupJunior Austrian Open in Weiz on 21 and 22 April

The 10th RoboCupJunior Austrian Open will take place in the Weiz Civic Hall from 21st to 22nd April 2017 and will include disciplines such as Soccer, onStage, Rescue and CoSpace Rescue. The emphasis is on creativity and fun while experimenting with electronics, programming and robotics. Young people from national and international schools will get to know each other and playfully compete. The best Austrian teams will qualify for the RoboCup world championship 2017 in Nagoya, Japan. The RoboCupJunior Austrian Open is this year organised by the parents’ association of HTL Weiz, and some 600 participants from ten countries are expected.

"Robotics teacher" Martin Kandlhofer conducts research on how children and young people can be inspired about robotics and artificial intelligence and tells about this passion of his in a Face to face-interview. 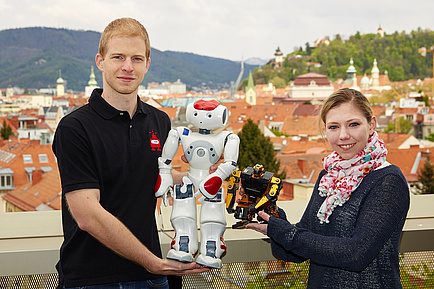 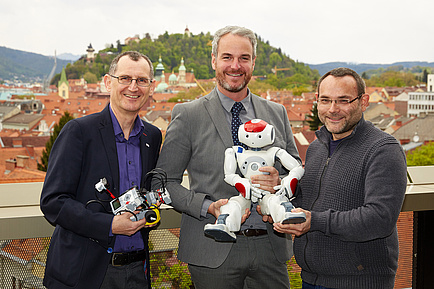