Between Electrical Engineering, Ballet and the Energy Supply of the Future

She matriculated in Chinese, is a state-certified ballerina and an award-winning doctoral student at TU Graz. Carina Lehmal on her soft spot for electrical engineering and how she is involved in the expansion of renewable energies. 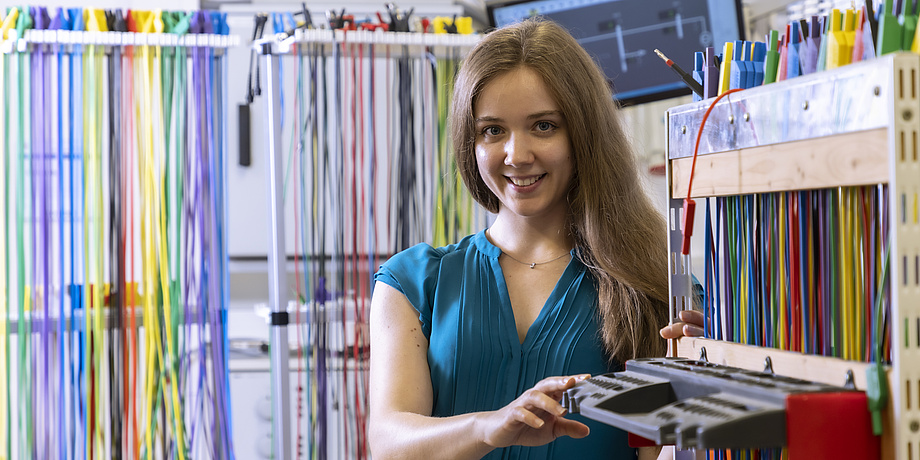 Her graceful hand movements reveal many years of ballet training and provide a strong contrast with the many devices with the inscription “Attention High Voltage” in the laboratory of the Institute of Electrical Power Systems at TU Graz. As part of her doctoral thesis, Carina Lehmal is conducting research into the stability of so-called converters, which connect renewable energy sources such as wind turbines and photovoltaic systems to the power grid. She was recently awarded first place for her work in the Women’s Prize for Digitalization and Innovation from ORF and Infineon. Read on to find out what sparked the dancing engineer’s interest in electrical engineering, who is electrical engineering the right course of study for and what pearls of wisdom her mother gave her.

News+Stories: What were your first experiences with electrical engineering?

Carina Lehmal: When I was about 12 or 13, I was given an experimentation kit as a present. Inside was a solar cell that could switch on an LED lamp. That interested me immensely – switching on light with the sun. So I decided to do electrical engineering at HTL Bulme in Graz, Federal Secondary School of Engineering.

You have been gaining experience at electrical engineering institutes at Graz University of Technology (TU Graz) since the age of 15. How did that come about?

Carina Lehmal: Internships were compulsory at the Bulme. There were rejections from companies. But TU Graz accepted me as an electrical engineering beginner. Lothar Fickert, then head of today’s Institute of Electrical Power Systems, integrated me directly into research projects and emphatically invited me to study at TU Graz (laughs). And because I also speak Chinese, I was also able to do an internship with a company in China afterwards.

One moment. You speak Chinese?

Carina Lehmal: Yes. My best school friend is Chinese and I thought it would be a super secret language in class just for the two of us. So I started taking Chinese courses at the Confucius Institute at the University of Graz and finally did my oral Matura (general qualification for university entrance) in Chinese.

How did your journey continue at TU Graz?

Carina Lehmal: After I had already done four internships during school, it became obvious to me that I would study electrical engineering. That worked out quite well. I was only three months over the minimum time in both my Bachelor’s and Master’s degrees. One incentive for me was an experience while still at school at a cable company in Poland. I had to carry out repetitive movements on the assembly line. It was incredibly exhausting and I vowed at that time to be so good that I would be spared such a back-breaking job.

I can see from your movements that you’re a dancer. How did you become a dancer?

Carina Lehmal: I started dancing ballet when I was four, actually as a kind of therapy because I kept tripping over my own feet. I then went to the opera ballet school and took the basic ballet training, including an exam, at the Vienna State Opera. So I’m allowed to dance on every stage and I also partly financed my studies with it. But my mum told me early on “It’s easier to make money with your head than with your sinews”.

So, are you more of an engineer than a dancer?

Carina Lehmal: I’m an engineer AND a dancer, but ballet has always been “just” my hobby. That had the advantage that I could do it completely without pressure. And I also took a lot from dancing for my studies. Discipline, for example, but also balance, because you have to concentrate fully on every movement and other topics in your head have a break. My time management also developed very well, with courses, opera performances and 16 hours a week as a study assistant, the week was always very full (laughs).

I’m an engineer AND a dancer, but ballet has always been “just” my hobby. That had the advantage that I could do it completely without pressure. And I also took a lot from dancing for my studies.

Let’s get back to electrical engineering. What qualities and skills do I need to do this degree?

Carina Lehmal: Well, first of all, let me say from my own experience that you don’t have to be a math(s) genius for these studies. I’m not one, but thanks to study groups and great mutual support among the students, I still got through very well.

And who would you recommend to study electrical engineering?

Carina Lehmal: Anyone who asks themself questions like “Why do we have electricity? How can we produce electricity? How do power plants work? How is the electricity price calculated? How can I work on solutions for a climate-friendly energy sector?”, then a degree programme in electrical engineering is just right for you. It is incredibly versatile. And one bonus is that for the next few decades, well-trained electrical engineers won’t have any job worries. Or even for the next centuries!

For the next few decades, well-trained electrical engineers won’t have any job worries.

What is your special area? What are you conducting research on?

Carina Lehmal: With a complete switch to renewable energy from wind and sun, for example, we would currently still have massive difficulties in keeping our electricity grid stable. The electricity grid is geared to a few sources, namely large power stations, and not to tens of thousands of individual suppliers who deliver very different amounts of electricity depending on wind and weather conditions. At the same time, we are used to electricity and hot water around the clock; no one wants constant power cuts, let alone blackouts. And this is where my work comes in, among other things. As a result of the energy transition, more and more converters are being connected to the grid as a link between renewable generators and the electricity grid. I deal with the stability of these converters and how they have to behave in the event of a fault in order to meet the standards of the grid.

Thank you. Have you got any more good advice for students concerning electrical engineering?

Carina Lehmal: First of all, it’s not witchcraft. It interests me and I’ve learned it. And secondly, my mum also told me that you can be anything you want to be. So, you can also do what interests you. So if you notice that something about electricity and energy excites you, why not study electrical engineering?

If you notice that something about electricity and energy excites you, why not study electrical engineering?

The free online course ElectrONiX - Amplifiers on the educational platform iMooX requires some basic electrical engineering knowledge, but still offers a low-threshold introduction to the basics of electrical engineering. The first course is online, further courses will follow from autumn 2022.