Time to go. We’ll be there the day after tomorrow

Two architecture students from TU Graz developed a 23-m2-large mobile space made of cardboard. They reveal in the interview the doubts they faced about developing the prototype for refugee accommodation. 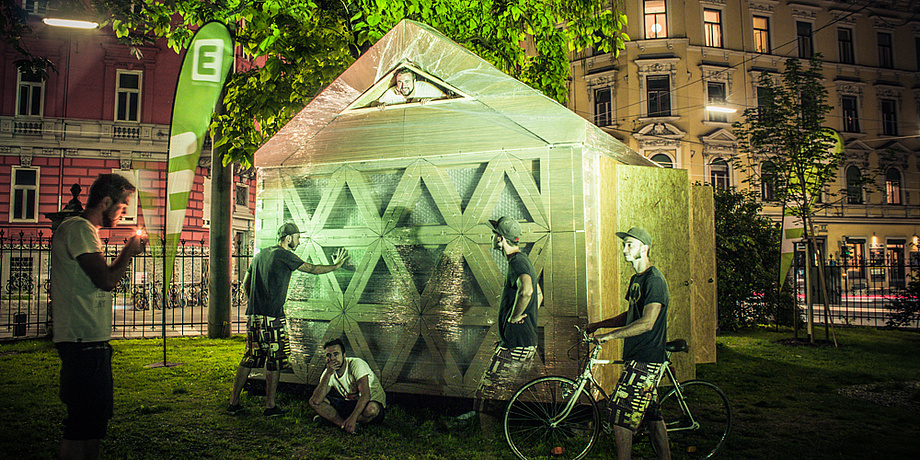 When implementing their diploma thesis, Patrick Ernst and Robert Sterzing had to slip into a variety of roles. At the end stood the prototype of an emergency shelter made of cardboard.
Patrick Ernst and Robert Sterzing came to Graz from Dresden to do a master’s programme in architecture (Link). For their diploma thesis, they made a dwelling out of commercial corrugated cardboard which works like a huge assembly kit. Neither aid organisations nor business enterprises had any enthusiasm for their humanitarian idea and at first even colleagues didn’t take it seriously. Though disconcerted, they didn’t despair. The experiences they went through from the idea to the prototype and what makes their project unique you can find out in the interview as Patrick and Robert share their reflections just before the completion of “arcCard shelter2.0”.

News+Stories: Where did you get the idea for your diploma thesis?

Patrick: Amnesty International released a report in the summer of 2015 stating that the conditions in Traiskirchen were catastrophic. We wanted to make a public contribution because of the refugee situation. It’s just unacceptable that in the 21st century people in our country – one of the richest countries in Europe – have to sleep under the stars – some for months at a time.

Robert: We met Caritas, for instance, and visited their refugee accommodation in Graz. And we looked at a few buildings in Dresden. But above all we also spoke to the refugees themselves and their carers to find out what they felt about the situation. That was the starting point of our planning.

Patrick: But it has to be said that there is a difference between long-term accommodation as in Graz, for example, and an initial reception centre as at Traiskirchen. Out topic is about initial reception.

Robert: By talking to people, we found out that four persons in one living unit is an optimum size. I also met people who were squeezed into any old accommodation in groups of ten. And when ten persons from different countries, some who have had traumatic experiences, live together in the narrowest of spaces, there’s bound to be problems.

News+Stories: Was it hard to get funds for the prototype? 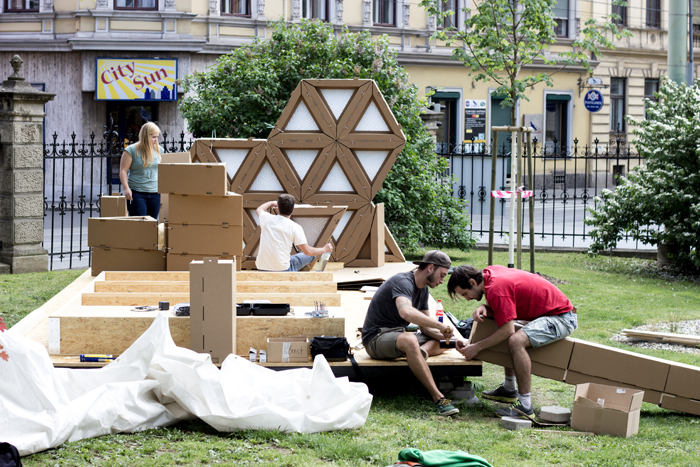 „arcCard shelter2.0“ was a giant experiment. Many people only took Patrick Ernst's und Robert Sterzing's (left to right) project seriously when the prototype was built.

News+Stories: So what are the modules like and how do you make a house out of them?

Patrick: We produced the individual cardboard parts on the cutting plotter in the cardboard works of DSSmith in Kalsdorf in the last few weeks. When we were there for the first time, we were given a piece of very important information not to use cardboard in the form of a panel like traditional building materials, but rather to shape it three dimensionally as in Japanese origami. DSSmith sponsored the material for us and allowed us to mechanically produce it on the cutting plotter. The machine even makes the creases and folds. We just had to stand there and fold it together as if it were a huge kit. Then we plugged it together. It’s easier to order a gazebo from a DIY store (laughs). You don’t have to be strong to lift and move the individual parts around – even with the insulation material in place, it doesn’t weigh very much.

Robert: What we made for the prototype on the cutting plotter would look different for series production. For each template that you need, you have to produce cutting dies. Then you can produce a complete shelter in a few minutes. We looked around the works to see how fast cardboard is made, and the cardboard pieces really fly off the assembly line. In an extreme situation we can respond very quickly with our system.

News+Stories: In the case of an emergency, how fast would production and development of a shelter be?

Patrick: There are about 250 individual parts. They’re composed of modules for walls, windows, filling material, corners and roof. Altogether there are about 280 panels. Two people can create 10 to 15 pieces per hour. And of course the cutting dies have to be made before.

Robert: How long production would take is hard to estimate. But as for the sizes of the individual parts, we made sure that every plant could make them throughout the world. There aren’t any special formats or over-large sizes which can only be made in high-tech Europe. In an emergency, you can make cutting dies relatively fast. This means thousands of shelters could be made locally in the shortest possible time.

News+Stories: How is “arcCard shelter2.0” different from other emergency shelters?

Patrick: arcCard shelter2.0 requires almost no logistics for building accommodation in a crisis situation. There are just the production costs. And they’re very low because we’re not planning for the long term, but rather for short terms and amortisation periods and flexibility.

Robert: Our shelter can be produced in the country concerned and transported the remaining kilometres to the desired area. If we develop the prototype further, we could just leave the shelter standing and let it weather in the wind and rain. Cardboard and paperboard can be usually recycled seven times. Even the weather-protection film enclosing the cardboard can be manufactured from biodegradable plastic.

Patrick: I think what is expensive is the logistics. If I first have to ship German Red Cross emergency shelters to Sumatra, it takes three weeks before arriving. But we don’t have this time. We would send building instructions and people to help set them up on-site. We’d say: it’s time to go, we’ll be there the day after tomorrow.

News+Stories: What skills have you gained from the project?

Robert: A lot – in all areas. First of all, what we’ve learned about this material. But also the soft skills we’ve developed. We carried out countless talks with business partners and told our story again and again. Then we found our way to the innovation department of ENERGIE Steiermark, who immediately thought our idea was worth supporting.

Patrick: We’ve sent so many emails and had so many phone calls. You learn to be professional to a certain degree; you learn how to persuade people. But you also make a lot of mistakes when you sell yourself and you only realise later that it doesn’t work like that.
arcCard shelter2.0: The idea to develop emergency shelters for refugees only came about in spring 2015. Thesis supervisor Professor Peter Hammerl, from TU Graz’s Institute of Architectural Technology, immediately found the topic exciting. Patrick Ernst and Robert Sterzing experimented with cardboard in the summer and developed their manual skills. By autumn, the design using three-dimensional triangles made of cardboard was complete. The prototype was ready in mid May, and the deadline was 23 May 2016. The sponsors DSSmith Packaging and ENERGIE Steiermark supported the project.
Title of the diploma thesis: Wohnen in der Welle. Humanitäre Architektur für Katastrophenschutz und Asyl
Project arcCard Shelter 2.0
Institute of Architecture Technology
Patrick ERNST, BA
Phone: + 43 660 3880151
Robert STERZING, BA
Phone: + 43 660 3966573
Rechbauerstraße 12/I, 8010 Graz
arccard.shelter2.0@gmail.com