Diana Klemen is blind and Thomas Stamer has dyslexia. They are two of many students with special needs who are successfully studying at TU Graz. 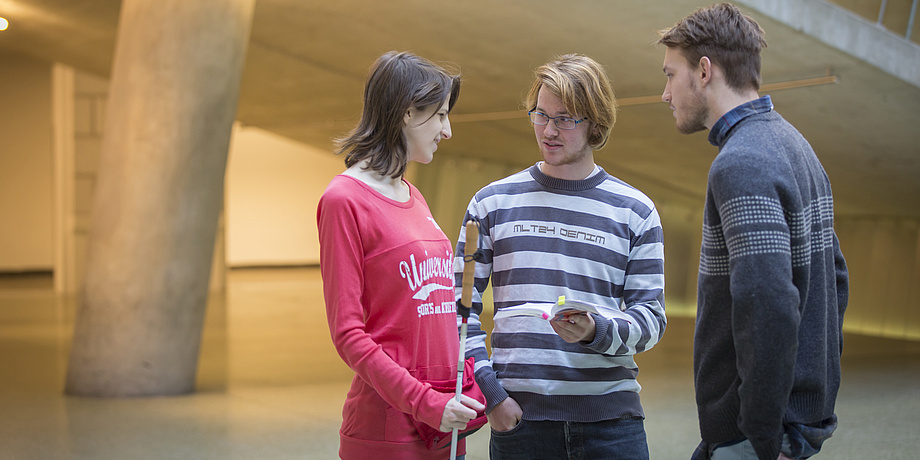 Diana Klemen, Thomas Stamer and a friend at the "Alten Technik".

Diana Klemen sips her double espresso in the popular café right next to the TU Graz Library in Technikerstrasse. Actually, she studies mainly at the Inffeldgasse Campus but came here specifically for the interview. “The places I travel to I usually know very well. Otherwise I ask or rely on my voice-controlled navigator on my mobile,” explains the student, who has been blind from birth and is studying Teacher Training for Computer Science in her third semester.

News+Stories: You started studying classical computer science at the beginning. What made you change?

Diana Klemen: I always wanted to do something with people and not end up as a programmer (laughs). But I didn’t know for a long time whether that was possible for a blind woman. 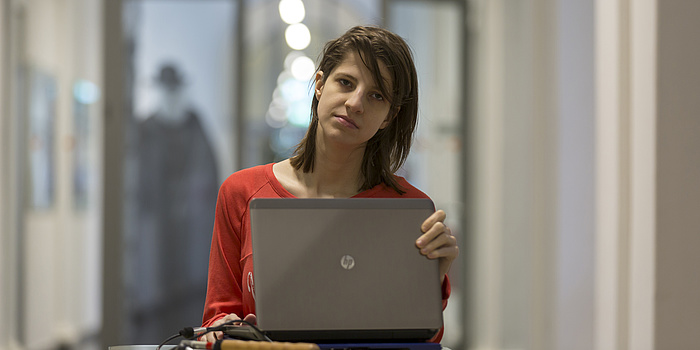 Diana Klemen is in her third semester of her studies of Teacher Training for Computer Science.

What strengthened your resolve?

Diana Klemen: Teacher training education has changed dramatically in the last few years. For instance, the professional placements now take place much earlier, and I can find out very quickly whether standing in the classroom and teaching will work for me. I’ve attended teaching classes and it was a very interesting experience. Obviously, I don’t notice some of the things that the pupils do. But I discern a few things that other teachers don’t notice.

Are there already blind teachers in Austrian schools?

Diana Klemen: I don’t know of any in a mainstream school. A few semesters ahead of me is a young man who’s also got a visual impairment. That’s why it’s still very hard to say what aids we need in the teaching situation because there’s no empirical data. But the classroom would have to be technically well fitted out.

The biggest question – from both me and my social milieu – is how will I cope with pubescent pupils? Of course, I don’t know yet, but I’d like to just try it and take it step by step. Deal with the problems when they occur and not just make my life difficult beforehand.

How were you at the beginning of your studies at TU Graz?

Diana Klemen:  I already knew another student at TU Graz. She’s also got a visual impairment and was able to help me a lot. And right at the beginning I contacted the service department Accessible Learning, and they were also able to help me. At the beginning, it was primarily through this department that I communicated with the teaching staff, but now I approach them directly.

How do people deal with this issue at TU Graz?

Diana Klemen: Before I arrived at TU Graz, I attended the secondary school in Judenburg with computer science as a compulsory subject. People were very obliging and even typed in all the documentation when it wasn’t available in digital form. And when I came to TU Graz, I was very surprised how open people were dealing with it. I always go at least to the first courses to clarify the exam modalities with the teaching staff. Sometimes I use the services of an amanuensis. These are students organised by the service department Accessible Learning who are paid to take notes for me in the lectures. But care has to be taken that the teaching staff don’t start to communicate with the amanuensis, since I’m actually the student. 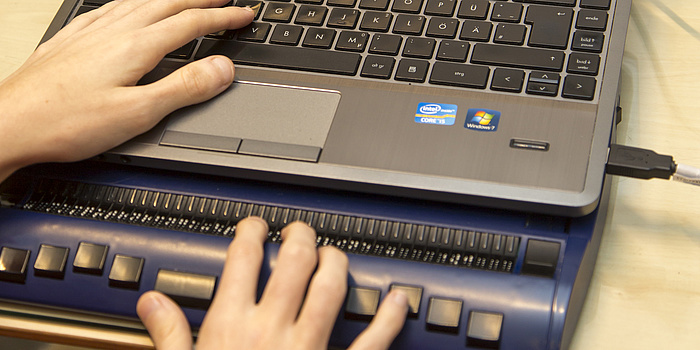 A big relief for me and the teaching staff is the fact that many courses are recorded and are uploaded to the internet as videos. This means I can always pause or rewind if I don’t understand it at first go.
The most important thing is to have very clear ideas about what you need for studying right from the beginning and that you go to the lecturer with these concrete ideas. I think that nearly everyone is open to alternative solutions – especially at a technical university.

Born in Germany, Thomas Stamer is 20 and is in his third semester of his bachelor’s studies in Mechanical Engineering at TU Graz. He has been in Austria for the same amount of time – three semesters. “My father was an engineer and always treated each assignment abroad as home,” he smiles. The sports-loving young man spent his youth between Tianjin (China), Shanghai (China), Pakistan and finally Dubai (United Arab Emirates). He moved to Graz from Dubai after doing his English-language general school qualification for university. “I slept wearing several thick pullovers for the first few days. Going from the heat of Dubai to the fog of an autumnal Graz was a massive change,” he explains. 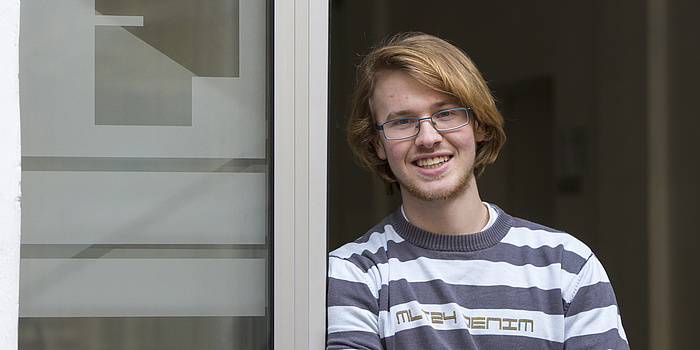 Thomas Stamer is in his third semester of his bachelor´s studies in Mechanical Engineering.

News+Stories: What made you decide to come to Graz?

Thomas Stamer: I always wanted to see Europe. Actually, I would’ve moved to Munich – which is closer to my place of birth in Bavaria. But I would have had to wait one more semester for admission to the international school qualification exam for university. Graz was the best alternative. The mountains are very near and Styria and Bavaria are very similar. But the most important thing was the excellent international reputation of TU Graz for mechanical engineering. I absolutely wanted to go there. The TU Graz Racing Team was also an important reason. I work a bit in the team and at the moment I’m learning about aerodynamics.

You’ve got dyslexia and ADD (Attention Deficit Disorder, which affects concentration, attention and impulsiveness). How do you organise your day-to-day studies? What requirements do you have?

Thomas Stamer: After enrolling, I contacted the service department Accessible Learning straight away and they helped me along. I was asked if I had any special needs regarding exams. Now I’m allowed to write my exams in a special room with only myself and an invigilator. This really helps me because I have great difficulty concentrating when other people are in the same room and I hear pens scratching and other noises. I just have to contact the service department a certain amount of time before the exam and everything is organised. I noticed almost immediately that the teaching staff at TU Graz are very open, and they give me many possibilities to shape my studies.

So, although you were born in Germany, you were brought up internationally, primarily speaking English. Did the language become an obstacle later?

Thomas Stamer: My English is much better than my German. I can also speak some Chinese and Arabic. However, I had difficulties because of the right-to-left script of Arabic. My teachers in Dubai gave up since I was still writing left to right after several semesters due to dyslexia (laughs).

Now I´m allowed to write my exams in a special room with only myself and an invigilator. This really helps me because I have great difficulty concentrating when other people are in the same room and I hear pens scratching and other noises.

In Austria, at the beginning I had difficulties with the language, above all because of the many technical terms. But I got to grips with it and in the first semester just didn’t do so many exams. With some lecturers I was even allowed to do the exams in English, although the courses were held in German. And very much of the required literature is in English. For me, of course it would be fantastic if more courses were offered in English.

What advice would you give to students who are just starting out on their studies?

Thomas Stamer: At the beginning of your studies, you should go to as many lectures as possible to get a feeling for the University. And search out older students who can give you tips. I find the tutorials very important – especially to get to know other students. The people you meet in the first few weeks of university become friends and learning partners for the whole period of your studies. And it’s always better to have available several brains and to motivate each other.

Will you stay at TU Graz after you’ve got your bachelor’s degree?

Thomas Stamer: I don’t know yet. If you’ve always been travelling, it’s not so easy to stop. I’ve always been interested in the green energy sector. And in this respect, Dubai is right at the forefront.
Melanie MANDL
B.A.
„Accessible Learning“
Inffeldgasse 31
8010 Graz
Phone: +43 316 873 6599
melanie.mandl@tugraz.at