"It was in my master's degree that I discovered my passion"

Paul Langhans and Rudolf-Martin Gradinger have found their strengths by circuitous routes – and are using them in a simulated Mars mission in the master's degree course Geospatial Technologies at TU Graz. 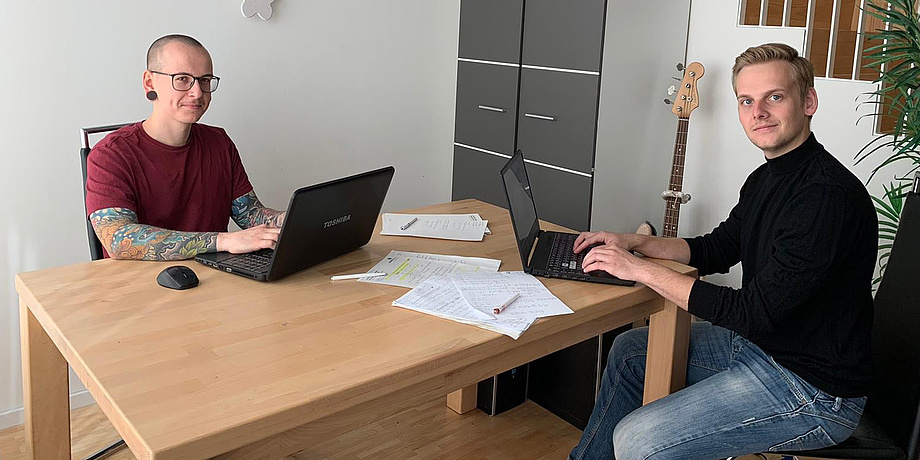 Paul Langhans and Rudolf-Martin Gradinger are studying a master’s programme in Geospatial Technologies at Graz University of Technology (TU Graz) and are currently working on their master’s theses for the Amadee-20 Mars Simulation project of the Austrian Space Forum. Together with the autonomous robotics team responsible for the development of the Mars rover, they are in charge of the "Exoscot" experiment, one of 16 simulation experiments. They are developing an application for geodata integration, management and visualization for automated access to the data collected by a Mars rover. As part of the interdisciplinary Mars field simulation team, they will deploy their application in the Negev desert in Israel between 15 October and 15 November 2020 in scenarios which are as similar as possible to Mars.

To work on a project like the Amadee-20 Mars Simulation was something I didn't even dare to dream of. Six analog astronauts, equipped with Mars Rovers, space suits and other equipment, will perform a variety of tasks over a period of four weeks. (Gradinger)

News+Stories: You have come to an extremely exciting point in your studies of Geospatial Technologies. Did you dream of this when you started your studies?

Langhans: No, not at all! I always wanted to do research on space topics, but I didn't have the courage to study astronomy or anything similar. I’m very pleased that I’ve now been given the opportunity to work on a "Mars mission” indirectly.
Gradinger: I graduated with a bachelor's degree in geography and at the beginning of my studies I didn’t know that I would later move into space exploration. To work on a project like the Amadee-20 Mars Simulation was something I didn't even dare to dream of back then. Six analog astronauts, equipped with Mars Rovers, space suits and other equipment, will perform a variety of tasks over a period of four weeks. The astronauts' equipment will be thoroughly put through its paces. Every program and robot must be prepared for all eventualities.

What is your role in the Amadee-20 Mars Simulation project and how did it come about?

Langhans: An email was sent out to all students at the Institute of Geodesy and Rudolf-Martin (Gradinger) and I applied as a team. After our acceptance was confirmed, we prepared for the simulation – in addition to tests and projects for the university. Our role is to automatically georeference the data that the rover collects, i.e. assign it to a specific position in geographical space, and then provide all the data for analysis in our visualization tool.
Gradinger: The difficulty lies in automating the various processes.

"What should I study?" Did you ask yourself this question like so many students after your Matura (higher school exams) or did you already have a clear goal back then?

Studying was not my first choice during my school days. (Langhans)

Langhans: Studying was not my first choice during my school days. It was during my community service that I then decided to gain admission to teacher training, together with a former school colleague. At the beginning I chose the subject combination Geography/English and changed to Geography/German after one semester. I never really found my way into teacher training – and apart from geography, my subjects didn’t really appeal to me. After two semesters at university I wanted to stop studying and look for an apprenticeship. I talked about it a lot with my parents and relatives. At the start of the winter semester I decided after all to do a bachelor's degree in geography.
Gradinger: I had no clear goal at that time. For a long time I couldn’t decide what studies I should choose. In the end, the choice fell by instinct on the bachelor's programme in geography. Actually, I wanted to specialize in spatial and urban planning, but during my studies I discovered my passion for geographical technologies, such as geographic information systems (GIS) and remote sensing, and decided to do my master’s in Geospatial Technologies.

Are there other ways to get a master's degree in Geospatial Technologies?

Langhans: The typical paths to the master's degree lead via a bachelor's degree in geography or environmental systems science / natural science and technology or geodesy at the University of Graz or Graz University of Technology. But there are also many students from Innsbruck, Klagenfurt and Munich who come to Graz to do this course of study. Depending on your previous studies, some requirements have to be met.
Gradinger: Geospatial Technologies is a NAWI Graz course of study and combines technological aspects with scientific background. In the bachelor's degree course in geodesy the focus is clearly on the technological aspects, whereas in the geography course it is on science. (Editorial note: NAWI Graz is a cooperation between the University of Graz and TU Graz. 18 study programmes are offered jointly.)

The typical paths to the Geospatial Technologies master's degree lead via a bachelor's degree in geography or environmental systems science / natural science and technology or geodesy at the University of Graz or Graz University of Technology. (Langhans)

Did you also have any low points in your bachelor's or master's degrees and if so, which ones?

Langhans: Yes, I did, partly because I couldn't put my strengths and interests in perspective. At the beginning I chose a course of study which didn’t suit me and I wanted to stop studying altogether. In the master’s there were no real lows anymore because I liked the study programme right from the first course. The only negative experience was that I had to give up a course due to lack of previous knowledge. It was hard to admit it to myself. In the meantime, however, I repeated it – and passed it.
Gradinger: I think every student has a moment when they wonder if studying is the right thing for them. If an exam doesn’t turn out as I imagined, the motivation to study can quickly be lost. What’s important is not to lose your nerve immediately, but to approach the topic with a certain calmness.

I think every student has a moment when they wonder if studying is the right thing for them. What’s important is not to lose your nerve immediately, but to approach the topic with a certain calmness. (Gradinger)

Did you have a concrete idea of your career after your studies?

Langhans: During my master’s studies I discovered my passion for programming and realized that this is my strength. So I definitely want to get a foothold in the IT industry. At the moment, it’s still open as to whether I’ll continue my studies after my master's or enter the world of work directly – probably the latter.
Gradinger: I still haven’t got any concrete ideas yet. But through my master’s thesis I discovered my passion for geoinformatics. I would like to continue working in this area and improve myself

Who would you recommend your studies to?

Langhans: To everyone. The initial phase was very demanding because I had to catch up on a lot of things due to my previous studies in geography. But even in the first few weeks you learn a lot. I put my focus on computer science courses. If you are not comfortable with this, you can also shape your studies individually in other areas. There's a group on Facebook which interested persons can join. A lot of things are shared in it, from information on events to projects and possible job opportunities.
Gradinger: I would recommend this study programme to all those who are interested in processes on Earth driven by man or nature, or in near-Earth space covered by satellites. By combining sciences with technology, there’s something for everyone.

In the master's degree programme Geospatial Technologies at Graz University of Technology, majors are available in geographic information systems (GIS) and modelling, remote sensing and measuring systems as well as advanced software.

You can find more information about the study programme Geospatial Technologies on the TU Graz website.