Impossible to build a racing car in six months? Not so; each season the TU Graz racing team develops and produces a racing car by the name of TANKIA. Anthea and Ingo explain why it’s worth it. 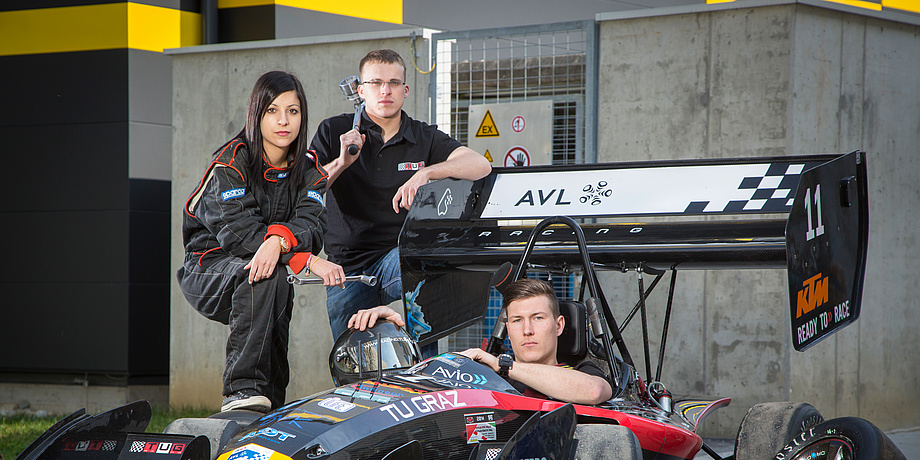 Car enthusiast Anthea Kerollos found her way to the TU Graz Racing Team through an information event and is currently the marketing leader. The student team develops, designs and builds racing cars for the international Formula Student.
Anthea Kerollos studies Business Administration at the University of Graz; Ingo Pirscher studies Mechanical Engineering – Economics at TU Graz. The energy-charged marketing leader and the king-size team leader of the successful student initiative take time out at the busy team headquarters at the Inffeld Campus for questions from the News+Stories editor just a few weeks before the roll-out of the TANKIA 2016.
It’s rewarding to see the car in the end and to know that we all made it together. And if you get a good place in the competitions, you’re unbelievably proud.

News+Stories: A team of students build their own racing car in about six months and get it ready for the start. How is this possible?

Ingo: It’s about total teamwork. Some of us work day and night on the car – for several days in one go. Without this, you can’t do it. We’re under a lot of time pressure. Each person from the core team of some 25 persons takes over a small part, some even more. We work in seven modules. Mine is management, Anthea’s marketing, and then there is the chassis/ aerodynamics and suspension – which deals with the running gear, powertrain – in other words engine and drivetrain, and electronics and IT. We always build on the knowledge of the previous year. Our Alumni – former team members who are no longer active – support us and pass on the know-how from year to year. Anthea: In principle we take over the concept from the year before. If something didn’t work, we improve it. Everything is built from new, including the monocoque, – the chassis. For this a team of six to eight students work at Mubea Carbo Tech in Salzburg. Carbo Tech is a manufacturer of lightweight composite materials, such as carbon, which builds monocoques for McLaren, among others. The company is one of our main sponsors. Ingo: We planned eight weeks for the carbon chassis; this year we did it in six weeks. Our team works continually from Monday to Friday in Salzburg. In the meantime a former team member works at Mubea Carbo Tech Graz. Which is a good connection when it comes to questions. Parallel to the chassis, we’re always fiddling about on the TANKIA engine. For this we’re allowed to use the engine test bed at AVL for six weeks, 24 hours a day.

You have good contacts with companies. A good network?

Ingo: We’ve got good connections to all our sponsors. AVL, our cooperation partner of many years, is the main employer of former team members. Our powertrain leader from last year will soon do an internship at Audi. There are many job opportunities. And in turn we become aware of possible sponsors through the internships of our team members. And so it comes full circle.

The new TANKIA will be presented to the public on 22 April. What’s it like being a team member just a few weeks before the event?

Anthea: Everyone’s nervous and stressed out. The best thing to do is to spend every day from morning to night in the offices and workshops which TU Graz has made available to us at the Inffeld Campus. But we’re always looking at the end result. Ingo: The big parts have been completed five weeks before roll-out. Then it’s the turn of the fine details. We need shapes for the carbon parts which will arrive just before the 22 April. We’ve only got a few days to finalise this. 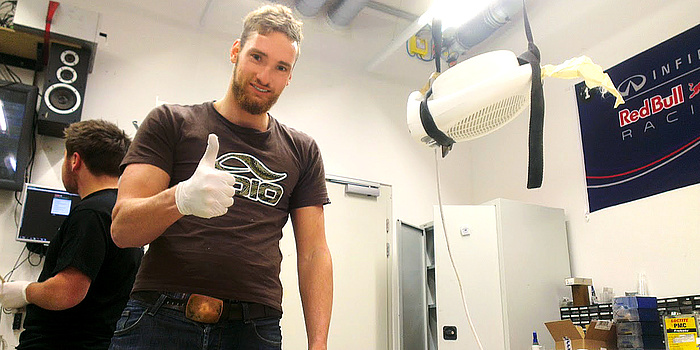 TU Graz Racing team leader Ingo Pirscher and his colleagues working on the season 2016 racer in the excellently equipped workshop at TU Graz’s Inffeld Campus. Currently the team is number 6 out of 538 teams in the world rankings.

As students, why do you put so much brains and free time in a racing car?

Anthea: It’s rewarding to see the car in the end and to know that we all made it together. And if you get a good place in the competitions, you’re unbelievably proud. Ingo: The first time the car is driven is an indescribable feeling. But after one season you’re really worn out. During this time, your studies are more in the background. On average team members are only active for four semesters – in other words two seasons. In the first season you help out; in the second season you put everything into it, for instance as module leader. Then it becomes really time-consuming. The problem is that the competitions take place in the summer months, from July to the end of august. To earn money or do an internship is hard.

And is this why you reward yourselves and the team supporters with a big roll-out party?

Ingo: At the public presentation of the new season’s TANKIA, we give everyone who supported us the opportunity to see the car. Without their support, it wouldn’t be here. We invite members of TU Graz, including professors of institutes who helped us, as well as many former team members who are doing their doctorates, or those doing their bachelor’s or master’s theses who are somehow connected to the TANKIA. Our sponsors use the roll-out to network among each other. And of course parents and relatives are also invited. They can finally see what we did in our leisure time. It’s a big party – also for our fans.

How can the TANKIA 2016 be better than its previous model?

Ingo: Aerodynamically it’s very strong because we completely revised the body styling – that’s the front wing, side wings and rear wing. On top of that, we’ve designed and built a completely new chassis because last year the rear axle “cocked its leg” while going into the curve. All the parts are screwed onto the chassis. We offset the pivots to counteract the problem. We put a lot of thought into it and worked a lot with some TU Graz institutes together. The centre of gravity is now lower and more exactly central. We hope to gain more stability and even better lap times.

What are your goals for the 2016 season?

Anthea: Silverstone, England, again. That’s the first competition of the season in July. Then there’s the Red Bull Ring in Austria, then Hockenheim in Germany. The Formula student in Barcelona, Spain, is the last competition of the season. We can’t race everywhere. What’s crucial is where the competition is stronger. Ingo: A really strong starting field is interesting for the team and for the sponsors. Then getting a good place counts more. A good place in Italy is worth less than a good place in Germany. Germany is the most important race in Europe. The hardest thing to do will be to build on the 2015 season. We were overall winners in Japan, fourth at the Hockenheim Ring in Germany, and second at the Red Bull Ring.

Competition or team spirit – what rules on the racing tracks?

Anthea: The best example is our favourite rivals – the racing team from the University of Stuttgart. They’ve got a very strong car and are our hardest competition on the racing track. Nevertheless, we test together in the week before the competition and help each other. It’s not like Formula 1, we’re all in the same boat. As sixth in the world rankings, we are regularly contacted by international teams from, for instance, India, China and Thailand via email or on Facebook and asked to exchange knowledge. Ingo: The Japanese are crazy about our car and want to see us again in the 2016 competition. Also, some Italians wrote to us asking if we wanted to sell our carbon wheels or the business plans of the 2008 TANKIA or even the whole TANKIA von 2008! Of course we didn’t. They’re rather strange questions (grins).

TANKIA 2016 in three words? aerodynamic, powerful, fast
Overall concept? Lightweight construction car, weighs about 150 kg
How is this possible? Monocoque and nose made of carbon, wheels are a mix of carbon and aluminium, single cylinder engine with less HP and fewer kilos.
Slogan? It’s not the top speed but rather the cornering speed that counts.
Why is that? Long straight sections are not so common in the competitions, so what counts is the ability of the driver.
Design concept? Traditional from the outside, the know-how is inside – carbon, honeycomb structure with aluminium components.
Weaknesses? Carbon is costly, hence relatively expensive manufacturing costs – a disadvantage in theoretical competitive pricing when it comes to costs in series manufacturing.
TU Graz proudly calls the successful TU Graz racing team its student racing stable. Most of the 50 team members study at TU Graz, but not all of them. They all contribute experience from a wide range of disciplines – from mechanical engineering and telematics to business administration and environmental system sciences. They all pursue one aim: to build the best Formula Student racing car. Without the team spirit and support from business partners and former team members, the success of the TANKIA racer – short for “there are no Kangaroos in Austria” – would be unthinkable.

Upcoming events
... and much more on the TU Graz Racing Team facebook site